Each year when it hits November and December the arms race begins to see which publication can get their ‘albums of the year’ list out first. That owes as much to the practical production cycles of getting the final issue of a magazine out before Christmas as wanting to reach the summit of Google’s SEO rankings. We’re part of that, too, we guess – we shared ours in the second week of December, which felt about right – not too early but not so late as to interrupt The Big Fat Quiz of The Year. And so, traditionally, December’s a month where very little gets released. The shelves are too full of Bublé singing Frank Sinatra covers and NOW compilations. But to give 2016 some retrospective credit, the final few weeks of the year contained some great albums released bravely and/or foolishly late in the calendar year.

Few of them benefited from appearing in the end of year lists. However, it feels kind of remiss not to acknowledge them before everyone gets fixated with the new music arriving in this year ahead. The one thing they have in common, all these artists have got enough confidence to trust in their fanbase to not worry too much about a traditional release strategy. If you turned off the Internet over the Christmas holidays, then it’s worth tracking back on these.

Simz refuses to play the game. She hasn’t come through a music industry machine that fed her releases out at the right level of buzz at the right time for the right tips list or whatever. Her success has been a genuine ‘grassroots’ (awful word) movement. This, her second album, features Chronixx, SiR, Syd, Chip, Ghetts, Bibi Bourelly and is a concept LP based on the story of Alice In Wonderland. It requires close listening – her lyrical interplay is among the best out there, but Simz is an important, independent voice not being broadcast loudly enough just yet.

Originally signposted as a January release RTJ decided to share their new album on Christmas Day instead, with the duo saying “after a crazy fucking year and with a full tour about to set off we asked ourselves what we were waiting for…  And we just couldn’t come up with a great answer.” They’ll get back on the road in 2017 – not that they ever really came off it – and their live show, where they really excel, incrementally gets bigger. The album features input from Danny Brown, BOOTS and TV On The Radio’s Tunde Adebimpe. Download it for free from their website.

To those who’ve not got that close to it, Donald Glover’s meanderings into music to date can come across as a bit of a vanity pass time on the side of his career in TV and film. ‘Awaken, My Love’, his third album, was made last year at his home. During the day he’d write episodes of Atlanta. At night, he’d swap his TV writing team for his band. ‘Awaken, My Love’ is an album of wide imagination, reminiscent of Outkast’s ‘Speakerboxxx/The Love Below’. It’s ambitious – at times sounding like Mike Patton’s Mr Bungle project, Parliament-Funkadelic and Prince. Frank Ocean, Beyoncé and Solange have received praise for their ambition, and refusal to make a conventional pop record in 2016. This album deserves a portion of that attention, too.

It was an unlikely rumour that swirled around for almost two decades before it finally arrived in the final weeks of last year, just six months after Phife Dawg passed away. Full of cutting commentary, dark humour and righteous energy, it felt like a senior teacher re-entering the classroom to show the junior tutors how it’s done.

Bit of a cheat this one. It’s technically a 2017 release as Eno shared his latest work as you were sloshed on Lambrini watching Jools’ Hootenanny at midnight on new year’s eve. It’s an ambient, ever-changing (on some platforms), dreamlike piece of work released in an innovative app format. In our cover feature interview from December he said: “You don’t finish a piece of music like this, you start it. You bring it into the world and then it has its own life.” 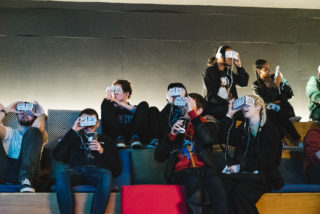 The future of music consumption, or a gimmick that makes you look like a nob? Childish Gambino’s new ‘VR vinyl’ experienced