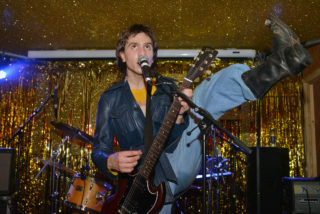 “Hello Twiglets!” hollers Brian D’Addario as the Lemon Twigs bound across the stage on the stroke of 9:30pm. Michael D’Addario jumps behind the drum kit and the foursome (including guitarist and keyboardist Danny Ayala along with bassist Megan Zeankowski) get cracking with ‘I Wanna Prove to You’ from the new record. The wiry brothers own the starry crowd – including the likes of Alex Turner and Bowie producer Tony Visconti – right out of the gates.

The Lemon Twigs are anachronistic in all the obvious ways people have written about. They sound like Big Star crossed with the Beach Boys and the Beatles. They have a penchant for over-tight 1970s t-shirts and flares. They have crazy hair.

Witnessed live though, what really places them out of time is their self-confident revelry in joyous song craft and virtuoso musical chops. Theatrics like the boys’ high-kicks and jumps aren’t delivered ironically; there’s simply an abundance of fun in the way they play. The message is clear: this is music to be enjoyed. 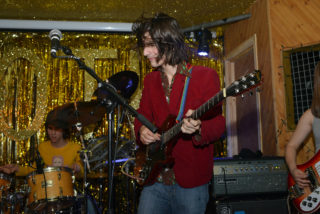 Brian certainly seems to be having the time of his life: “Hello… England! Hello… London! Hello… MOTH Club! Hello… guy over there!” Michael isn’t impressed. Four tracks in, ‘These Words’ arrives and gets the reception it thoroughly deserves. A bit later on, ‘How Lucky Am I?’ brings the band together for a set of harmonies so gorgeous that they’re scarcely believable.

Michael limbers up to lead the band through the rest of the show as Brian takes his place at the drum stool. After all, each brother can sing, play guitar, drums and any number of other instruments – why not switch things up? Alex Chilton cover ‘All of the Time’ sees Michael do his best impression of the late power-pop singer, screeching and gurning but most importantly, absolutely slaying on guitar. 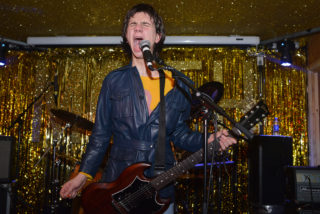 As a matter of fact, Michael takes it upon himself to douse virtually all of the remaining songs in scorching lead licks, seemingly just because he can. The closing bars to ‘As Long as We’re Together’ duly get torn to shreds. Final track ‘A Great Snake’ likewise sees its extended coda take on even more of an apocalyptic, grandiose form. The band joke about running out of repertoire but they’re back for an encore; barnstorming unreleased effort ‘Queen of My School’.

Yes, it’s been a shit year and yes, next year doesn’t look much better. Consider this though: the Lemon Twigs are barely out of their teens. At least the future of rock is in good hands.