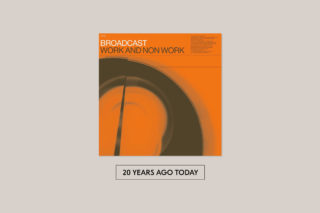 Although the trick of repurposing 1960s counterculture was starting to grow thin by 1997, a tangent to all the Beatles, Stones and Kinks fetishism was just starting to bubble up alongside nonetheless, in which library music and Lalo Schifrin film soundtracks replaced the White Album as the set texts, and Britpop’s brainless, feelgood chutzpah was trumped by something more redolent of the icy, disaffected sleekness of French new wave cinema. While still retrospective, this new interpretation was an eerier, less celebratory take on vintage psychedelia, with a distinctively pre-millennial scepticism applied that examined the cracks and weather-beaten elements of the music just as much as its overt cool.

As a collection of Broadcast’s three EPs that had been released over the previous nine months, ‘Work And Non Work’ exists both as a herald of this new sound and also a celebration of what had been achieved so far, and twenty years on its idiosyncratic interpretation of 60s nostalgia still feels far more nuanced and textured, and therefore more nourishing, than many of its contemporaries.

A lot of that is down to Broadcast’s resistance of a distinct mood: ‘Work And Non Work’ is an album of barely classifiable, often self-contradictory emotions – there’s a sort of crepuscular serenity to ‘Phantom’; a strangely economical luxury to ‘Message From Home’; a space-age domesticity to ‘The World Backwards’, with its depthless analogue synths combined with tacked-on vinyl crackle – and Trish Keenan’s flat vocals, all rounded vowels and blankness drifting over the mystery below, offer no obvious ways in either.

Broadcast’s production here, too, remains pleasingly in defiance of their peers, prodding at the imperfect sheen and elegiac atmosphere of library music and early electronica to create a version of trip-hop that might’ve been invented in the English plate glass universities of the 1960s: the microscopic pauses between each loop on ‘Accidentals’ and ‘Lights Out’ resist and subvert the seamlessness of 1997’s digitally-generated electronica, and an emphasis on fuzz and dust – actual and imagined – bring character to Keenan’s fluttering, bucolic melodies. A conflation in the recordings of real acoustic space and almost hermetically sealed, super-dry percussion and electronics, too, adds to the record’s sense of otherness, and the result is equal parts naive playground simplicity and abstracted Twilight Zone spook.

Not that all this was necessarily appreciated at the time: ‘The Book Lovers’ ended up on the soundtrack to Austin Powers: International Man Of Mystery – another slightly embarrassing artefact of the mid-90s’ obsession with psychedelic kitsch – incongruous among more brazenly crowd-pleasing songs by Mike Flowers Pops, Madonna (in her latest shape-shifting turn as a sort of Lulu lite) and the Lightning Seeds, and it would take until the turn of the century for Broadcast to follow up their debut collection.

In hindsight though, ‘Work And Non Work’ now resembles, among other things, a precursor to the likes of Boards of Canada, who would emerge a year later with a darkly intriguing mix of electronica and psychedelia full of frayed-edge interpretations of old-timey mood music that reached back to a bygone era not with dewy eyes but more an intention to discombobulate. The album also now feels like a marker in the passage of 90s retromania: ‘Work And Non Work’ was proof, after so much creatively bankrupt mimicry, that you could mine the past and it still sound like the future.