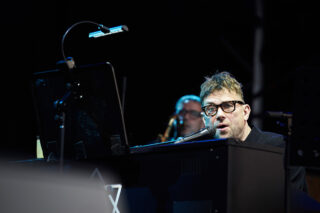 It's exactly the sort of thing you come to festivals for

Damon Albarn has bagged himself the perfect slot at this year’s End of the Road. Striding onto the stage as the sun starts to dip beneath the trees, the mood in our little knot of people is one of apprehension. There are just so many questions. With only an album and a half’s worth of solo material, will he play the career hit or just stick to his solo output? What other surprises could he have in store? What does the ‘Special Guest’ that’s written under his name on the lineup mean?

The biggest question, though, is which Damon are we going to get? There’s always been a tension between Albarn’s on-stage persona and the themes and topics in his songs. As the years have gone by, he seems to be moving without moving. The lyricism on his more recent solo projects is undeniably darker and more cruelly observed than anything he did with Blur. Yet, aspects of the happy-go-lucky, oom-pa-pa oom-pa-pa cheeky chappy, who bounced between episodes of TFI Friday and Smash Hits Poll Winners Party, remains.

Tonight we get the happy Albarn (perhaps the happiest ever), who is clearly up for a party. So much so that you wonder if he’d been tucking into the prosecco before he got on stage. “I don’t get out much these days”, he confesses right before sliding into an almost lounge-lizard performance of ‘Lonely Press Play’. “But, when I do, I like to enjoy myself.” He isn’t kidding, frequently gigging between songs and sometimes in the middle, like halfway through a pretty woozy ‘Out of Time’, after he notes, “I don’t know why I’m smiling; it’s hardly an optimistic song.”

The song is part of an opening salvo for a set that wanders in tone radically. It all starts downbeat. Early numbers like ‘The Cormorant’, ‘Royal Morning Blue’ and rendition of The Good, The Bad, and The Queen’s ‘The Great Fire’ drop with a studied sense of earnestness. Perched behind a piano looking like a combination of a grizzled jazz veteran and a guy who’d come over to do some grouting, the early stages have a strange, almost Scott Walker-esque energy. Even so, Albarn can’t resist the occasional knowing wink or cheeky grin, throwing just enough showbiz razzmatazz into the mix to keep us in legends set at Ronnie Scott’s territory, and keep us out of ‘old crooner having a breakdown’. 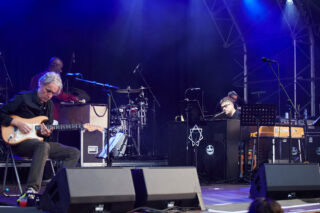 About midway, everything changes. Heading out to the front of the crowd with microphone in hand, the band (who features Ezra Collective‘s incredible Femi Koleoso on drums) strike up a version of Gorillaz’s ‘On Melancholy Hill’, and the energy picks up almost instantly. Suddenly, Damon Albarn, the artiste, recedes, and Damon Albarn, the frontman, appears. The last 20 minutes of the set is wall to wall smiles and good vibes.

The new single ‘Polaris’ lands as the first of three songs to close out the night, and with it comes a moment of pure magic. A rambling speech about chakras ends with a request for the crowd to vocalise a weird ‘ohm’ sound in the key of ‘e’. Then, using this makeshift sonorous choir as a foundation, the band builds the song towards a crashing crescendo. After a year of actively avoiding people, the comfort of being able to spend a moment communing in a crowd of strangers feels like a cathartic release. It’s exactly the sort of thing you come to festivals for.

The set ends with a picture-postcard version of Blur’s ‘This Is A Low’, and the main stage lights shine out to reveal a crowd united in swaying hands and soaring voices. It’s a warm, friendly hug to end a performance that has trekked across valiantly across emotional highs and lows. It’s a reminder that deep down, Albarn is the consummate crowd-pleaser. For all the atmospherics and conceptual rabbit holes, to my mind, at least, he’s at his best when belting out a massive chorus.