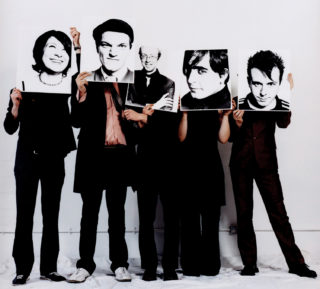 A decade ago Art Brut fully launched their direct challenge on straight-faced indie rock, led by a sarcastic frontman who couldn’t sing

I moved to London to form a band. I’d been in bands before, in Bournemouth, but everyone in my bands kept going to university and giving up. I was like, ‘no, what are you doing? We need to keep going!’. In the end I moved to London with the last member of my band [The Art Goblins], and I was just going around parties constantly looking for people to be in a band with me. I’d been trying forever; it just came together in 2005.

We became part of that New Cross thing – down there Angular Records had started. We’ve been lumped in with loads of different scenes, but that really was a scene, and that’s my real memory of 2005. Everyone would go to everyone’s gigs, and everyone was starting bands and side projects. It was a really exciting time, especially down in New Cross and it was weird for me because I lived in Camden but was travelling to New Cross to see bands, which is the opposite to what you’d probably think. Being around people releasing records, that’s what I really remember – that sense of, ‘oh fuck, we can do this; it’s not a weird abstract notion, being in a band – anyone can do it.’

Art Brut were a funny old band. There were times when it was mad, like, we hired a plane once to fly somewhere, and we’d be travelling across America in big tour buses, but there was never a day where we didn’t go, ‘how the fuck did this happen?!’. All the bands I like don’t even get that – like Helen Love and Animals That Swim and David Devant & His Spirit Wife and Baxendale – I thought we were going to be one of those types of bands, and we ended up going around the world. It was a surprise. I mean, I think we’re brilliant and that we deserve all of that – it was just a surprise that other people thought that too.

We took what we did seriously, but not ourselves seriously. That was sort of our mission statement, and I think that was our appeal. We were a weird mix of people. I saw a driver the other day who drove us back then and he said it was like driving The Raggy Dolls around.

We played our first show at The Verge in Kentish Town. I’d not been in a band for a while and in the The Art Goblins I used to hide behind a vacuum cleaner (you could change the sound from ‘hard floor’ to ‘curtains’ to ‘deep shag’ – I’d play a dustpan and brush at acoustic shows: that was the joke), but they wouldn’t let me do that in Art Brut, and I felt really naked, so I kept making sarcastic comments. People would clap and I’d say: “Don’t be sarcastic.” After four or five gigs of doing that and people not liking it, I saw a Jet tribute band. They were awful, but the singer was really confident, and I thought, ‘aahhh, that’s what people like!’.

We were always received pretty well, with sound men, in particular. They’d be like, ‘oh, you’re that Formed A Band band’. There weren’t lots of people at our shows, but the people there did like it. It got busier and busier, and went quite smoothly to be honest. And bands seemed to like us, maybe because they liked that we took the piss. It was me who was quite prickly back then. There had been all that stuff going on with The Libertines and Thee Unstrung and The Others, and I was worried we were going to get lumped in with all of that, and I hated that, so I might have been the dick to other bands more than the other way around.

I started to get recognised but it always happens when I’m doing something terrible. Like, Sainsbury’s value wine is quite nice, and back then I bought 8 bottles of it for the house and my bank card didn’t work properly so I went into the NatWest up the road and was shouting at the manager with all these bottles of cheap wine, and as I left the bank in the bad mood, clanking my bottles down the stairs, two kids went: “Top of The Pops!”.

Another time, when I was working in [local pub] The Camden Head, I was waiting outside to start my shift in the morning and these two German girls were like, “oh wow, Eddie Argos. Can you sign this and can we have a photo?” And I was like, “Yeah, cool.” And then they’re like, “what are you doing here? Why are you waiting outside this pub?” I thought, what’s more embarrassing – that I work in a pub now, or that I’m an alcoholic? So I said: “I’m just waiting for it to open because I’m really thirsty.”

It’s the same sort of time now as it was in 2005, isn’t it? When we first started, that’s why I was angry at everything, because it was all terrible. The music in the charts was bad (but then it’s always bad), but there weren’t any guitar groups that I liked. I think if Art Brut started now we’d do alright. There’s a lot more stuff that I like now, like Parquet Courts and Fidlar – we’re not like them, but if I was in a new band now I’d like to play with them. I think we’d do just as well now. Art Brut: a band that could be reasonably successful at any time.