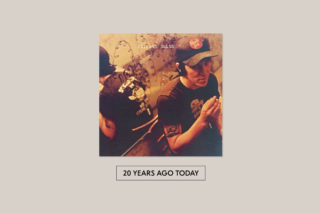 ‘Either/Or’ crept out twenty years ago today on a relatively tiny, Portland-based indie record label, with no fanfare beyond a couple of good write-ups in the US underground music press. Just over a year later, though, Elliott Smith was performing at the Oscars in a bright white suit, taking a bow between country superstar Trisha Yearwood and Celine Dion. The two events are linked – Smith was nominated that night in the Best Original Song category for ‘Miss Misery’, one of a handful of songs that he had contributed to Good Will Hunting, which also featured four other songs from ‘Either/Or’ after director Gus van Sant had built the film’s soundtrack around it.

But if a journey from coffee shop gigs to the most watched Oscars broadcast in history in little over a year suggests a supernova success story, the reality becomes a little muddier when ‘Either/Or’ is the background music: this is not an album of ambition or dreaming, or even fist-shaking indignation at an unjust world. Instead, like Nick Drake’s ‘Pink Moon’ (released, coincidentally, the very same day 25 years earlier), it’s a downtrodden, quietly accepting, depressive record whose odes to unpretentiousness and sighing vignettes make it one of the most honest, relatable and beautiful pieces of pop music of its era.

But despite its stoically depressive milieu, ‘Either/Or’ is never a trudge. Far from it, the acoustic-grunge aesthetic is filtered through a melodic Kinksian slink so that tracks like ‘Pictures Of Me’ or ‘Cupid’s Trick’, all sudden bursts of drums and leaping octaves alongside jaunty ’60s swing, can neatly sidestep the lyrical bitterness. Even when Smith elects to make his words to be unavoidable, as on the bare, regretful ‘Behind The Bars’, the subtle background instrumentation nourishes the song enough to ensure it remains welcoming.

In that way, perhaps the greatest tribute that can be paid to ‘Either/Or’ is that even though it’s a quiet, introspective and weary album, never does it feel underfed. For all its superficial frailty it’s actually deceptively lean: as ‘2:45 AM’’s muscular full-band ending is faded out after barely thirty seconds to be interrupted by Smith’s attention-attracting cough to announce the album’s last song, one starts to realise that Smith is in fact in possession of a kind of misfit, outsider confidence that is rather heartwarming. Similarly, while the songs appear to be about nothing more significant than notebook-scribbled quotidian observations and bundles of four-in-the-morning insecurities, Smith’s insistence on ‘Rose Parade’ that “when they clean the streets I’ll be the only shit that’s left behind” betrays a stirring stubbornness.

Smith didn’t win the Oscar that night. Instead, it went to Celine Dion’s lachrymose ‘My Heart Will Go On’ as Titanic swept the board. He wasn’t unduly disappointed (“I wouldn’t want to live in that world,” he told the Boston Globe a year later, “but it was fun to walk around on the moon for a day.”), and nobody who’s heard ‘Either/Or’, would ever believe he could have been: after all, suspicious of trinkets and not given to ostentation, Smith would surely have felt deeply uncomfortable with the attention. Indeed, beyond earning a deal with Dreamworks Records that allowed him to make two albums in professional studios before his awful premature death in 2003, Smith didn’t exploit his fifteen minutes, leaving that Oscars performance to exist as a weird blip in a career of beautifully humble, pure and generous songcraft. That ‘Either/Or’ continues to be a near-perfect example of that style twenty years on, as approachable and quietly robust as the day it was released, is perhaps tribute to the fact that sometimes opportunities are there to be forgone.