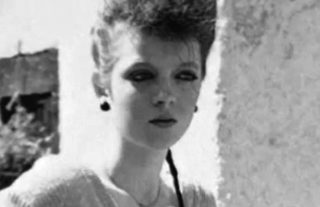 For all the bullies, glue-sniffing and zoo trespassing, Garbage's frontwoman now appreciates her teenage rebellion.

“I was in Edinburgh, Scotland, and I was the furthest from the term ‘Sweet 16’ as you could possibly imagine. I was in the throws of my real teen rebellion. I was difficult to live with and very angry. I had dreams of becoming an actress, and I put most of my energies into that. I struggled through school, which I hated. In primary school I really loved it and was a good student. A very dedicated, serious soul. But when I went to secondary school I was unfortunate enough to have a crazy girl in my class. She was really physically big and intimidating, and she came from a really hard part of town. She basically bullied me. It wasn’t actually for that long, but it felt like an eternity at that age. For about a year it went on. Although, mercifully for me, she got pregnant and then left school, I was relieved of my torturer, but she had robbed any kind of joy that I had gleamed from being there. I was skiving school and hanging out with older boys. Smoking, drinking and starting to experiment with drugs. I was just sort of wild.

My hair literally looked like a birds nest, but I thought I was cool as shit. There was a female singer in Edinburgh at the time in a band called Hey Elastica. I was kind of obsessed with her.

The people I was hanging around with in an extracurricular fashion were not people who stuck around [as friends for life]. I realised they were kind of mildly self-destructive. A lot of them were really from a hard background, they defined themselves as punks or mods or whatever was happening around then.

We broke into Edinburgh Zoo. It was a large expanse of land, and we weren’t anywhere near the animals, nor did we at any point even seek out animals, we just found a place inside the zoo that was quiet where everyone would sniff glue and smoke cigarettes. We’d get massive Coca Cola bottles and mix our parents’ liquor cabinets – make these lethal concoctions. Looking back now I’m amazed that one of us didn’t kill ourselves.

Most of my dedication was to Edinburgh Youth Theatre at that time. I think that was a real escape from school, and where I also fell back into being a child. It was creative, playful and joyful. Everything else was pretty dark at that point in time for me. I think a lot of it was down to hormones.

I come from a really lovely family, and I really loved my sisters and got along with everybody pretty well. But I know that I caused my parents a lot of stress. I basically just turned my back on my studies. I was an intelligent girl and a really good student, and then, for whatever reason, I just stopped attending to my studies and it drove my dad insane and worried my mum sick.

My mum, who was a singer herself, lost her voice. I feel so terrible about it now. She actually had to go to a therapist because she had lost her ability to sing – I literally stole my mother’s singing voice because she was so stressed out. I don’t think they really understood what was happening to her. I was just very combative at home – I was always challenging my father, intellectually, over the dinner table. So I’d ruin dinners. They would invariably end with me bursting into tears and running up the stairs.

Thatcherism was beginning to bloom around that period, too. That had a huge impact on me because my dad railed against her. Every night, it would drive him insane, somewhat like we’re experiencing now with Donald Trump. I remember a terrible quote from her that my dad railed against: “There’s no such thing as society, there’s only the individual.” My father, as a religious man, was so upset by that. I remember that making a huge impact. I’m a socialist at heart, as a result.

Looking back, I was very lost and confused. I felt really self-conscious the whole time. I feel relief that it’s over. But I’m also grateful that I had all that happen to me in that way. I lived my teenage years fully. As I’ve gotten older, I see a lot of adults feeling frustrated because they never rebelled, never spoke up for themselves and never challenged, debated and argued. Much like babies experience by putting everything in their mouth, I think teenagers are somewhat the same. They’re railing against the status quo, and I think that’s important to learn about yourself. Now I feel relief to know that I will never be that lost again. I wouldn’t want to relive it, let’s put it that way.”