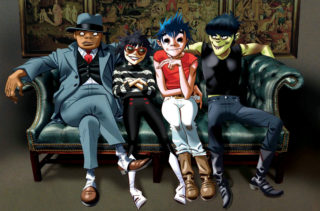 Starting to think we should interview more illustrated people

Never mind that The Gorillaz are the world’s first virtual band – their guitarist has taken our Getting To Know You questionnaire. Seems the Japanese former child assassin is still into killing, Grace Jones, spontaneous combustion and hamster arses

“Don’t lie down after a meal or you will turn into a cow.” It’s a Japanese saying. I’m still human, so there must be truth in it.

‘Serendipity’. How it sounds and what it means. Because life is chaos and that can be frightening, but chaos also brings beautiful, unexpected things. Like Mavis Staples on a Gorillaz record.

This is messed up. What kind of nightmarish dystopia would enforce that law? I’d spark a violent uprising like in The Hunger Games and change things. But if the revolution failed, I’d pick soba noodles.

Being a child super-assassin. A lot of night ops, and everyone who sees you wants you dead. A bit like working the Friday night shift at McDonald’s.

“I’m sorry, Wilson. I’m sorry! WILSON! WILSON!” Cast Away came out the year I joined Gorillaz. 2D would watch it five times a day. It really spoke to him; he even drew his own Wilson onto a watermelon. Murdoc butchered it with his battle-axe. Then juiced it. Maybe he was jealous. Or thirsty.

Ryōan-ji, a Zen temple in Kyoto. Every day, under the cherry trees, the abbot rakes little pebbles into lines. It shows the mystery of life. Something we are not meant to understand, but that we should try to contemplate. Like Humanz.

Grace Jones. She pilots her own spaceship far above the worlds of gender, race and fashion stereotypes, always going somewhere brave and new and beautiful.

‘Anaconda’ by Nicki Minaj. She owns her narrative in that song. I think she tries to subvert what society forces on her, which I admire.

Kanye West, on tour in America. He believes he’s a misunderstood genius, just like Murdoc. Needless to say, they totally blanked each other.

My bonsai tree. It grows out of the decapitated head of Cyborg Noodle. I never knew my parents, so the tree represents my roots; a link with home. It’s my happy place.

Hamster butts. Really big, fluffy ones. It’s a Japanese thing. There are many fans. Please Google it immediately, otherwise you’ll think I’m not well in my head.

Probably my M134 Minigun. 5,000 rounds per minute. Give or take. Perfect for splattering advancing zombie hordes. She can get very hot. I call her Motoko.

A Judas Cradle. It’s a medieval torture device. Murdoc is only good at buying presents he himself wants.

The way I pick myself up after I’ve been knocked down. Or blown up, like during the video shoot for ‘El Manana’.

Particle physics. Not hidden, exactly. I have a diploma. But the particles are tiny and v hard to find.

Finding out that Queen don’t rule Britain. As a kid I loved Freddy Mercury. He would have made a good leader. But then I found out the real person in charge was a man called Rupert Murdoch. Don’t worry, he’s on my list. ;-).

A Brief History of Time.

Not worth losing sleep over.

Time travel. Especially backwards. There are several people I’d like to assassinate. Mostly men, but that’s history for you.

Cupcakes. The icing promises so much, but the cake part is always really bland. They are inherently disappointing.

How to win the Cyberdemon boss battle in Doom 3. I wasted months on that.

“If you never enter the tiger’s cave, you will not catch its cub.” It means you will never succeed if you are too afraid to try. Another Japanese saying. Please stay away from actual tigers, though.