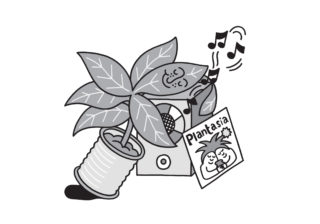 One man, a basil plant and a copy of Mort Garson's Plantasia

Words by Sam Walton Illustrations by Kate Prior

There’s a basil plant on my kitchen windowsill – the kind you buy, ambitiously, from Sainsbury’s instead of a plastic-wrapped single serving of the stuff, certain at time of purchase that this will be the solution to your fresh basil needs forever more, that the extra expense represents an investment, promising years of flavoursome food and transforming each loveless plate of pasta and sauce into a gourmet experience. The kind you imagine repotting into a cute brass bucket when it outgrows the standard-issue plastic one, and maybe giving it a name, its existence in your kitchen sparking a transformation from a functional room for cooking in, blighted by immoveable grease and mould, to an inviting, beautifully lit and seemingly self-cleaning creative space where delicious meals are only one part of an irritatingly smug tableau of seamless modern living.

I say “basil plant”, but really I mean “ex-basil plant”: two weeks on from my daydream of a herb-based utopia, the poor thing is dead on the ledge, its leaves shrivelled and limp, a monument to the fact that the only times I remembered to water it were when I was back in Sainsbury’s, walking past its cousins, feeling guilty about the neglect and the waste, left only to wonder whether it’s better disposed of in the recycling or the food-waste bin.

If this sounds like a well-worn cycle, that’s because it’s not the first time I’ve lived it. Indeed, my inability to keep any sort of houseplant alive is on a par with that of Depeche Mode to get enough. With that in mind, then, imagine my delight at stumbling upon Mort Garson’s Plantasia, a 1976 instrumental album specifically written for plants, scientifically formulated to encourage their growth based on claims made in occult literature that houseplants could mind-read, predict earthquakes, and, most importantly, enjoy music. Plantasia was originally given away with every houseplant purchase from Los Angeles’s now-defunct Mother Earth Plant Boutique. However, in recent years the record has found new life as one of the earliest examples of an album played entirely on the Moog synthesiser, and its initially ultra-niche distribution model has been updated for the modern day, first as a YouTube rip, and now, this month, finally reissued on vinyl by the Sacred Bones label.

I’ll admit I was initially sceptical of the record’s capabilities when I put it on in the living room. After all, the plantae kingdom predates human existence by half a billion years, and will also likely outlive our currently scheduled demise in 2034, so the idea that what plants have really been waiting for all this time is some easy-listening tunes played on an atomic-age electronic instrument is slightly fanciful.

But, reader, I shouldn’t have been. Barely seconds after the record’s opening ditty bloomed into life, I sensed from the other room my spurned basil plant’s drooping stalks perk up, like a sleeping dog’s ears upon hearing “walkies”. By track two, the plant was fully upright once more, as if woken from deep stasis, its leaves resaturated with colour and scent, and by the album’s midpoint its vines had begun to extend rapidly down from the windowsill, bypassing the washing up and slinking into the living room, drawn to the source of this audio lifeforce, tendrils hugging themselves around my speakers to squeeze out every last note of Plantasia’s resuscitating vibrations. Soon, my environment was more basil than living room, a cross between the Little Shop of Horrors and the carnivorous vines scene from Jumanji. Bound to the sofa, I became entangled with enough basil for a thousand and one nights of pasta and pesto. The record played on.

Thank heavens, then, for Plantasia’s final track, ‘Music to Soothe The Savage Snake Plant’, which managed, as presumably intended, to quell my resurrected basil, loosening the plant’s grip on me and encouraging it to retreat to its windowsill home, returned to life and now ready to serve, and be served, in my next meal.

Now, that story about Plantasia is not true. My basil plant remains very much dead, Garson’s half-hour Moog adventure just an enjoyable bout of hippie whimsy. However, what this tells you about Plantasia – that still resonates. When Garson powered up his synth, he dreamt of his music not just being a pleasant listen, but also having a magical, transformative utility. And he’s not the only one: there are bottomless Spotify playlists of algorithmically composed music to aid concentration or creativity, albums designed to relax your pet, tracks of supersonic drones to ward off bugs and teenagers. But Garson’s particular seam of pseudoscience is perhaps the purest: he didn’t strive to create a more efficient working day or a calmer dog, but to write music that would save the planet from ecological disaster. Ponder those lofty aims as you cue up the next Parquet Courts.

Back in Sainsbury’s again, as I pass the rows of pert basil plants waiting to be taken home and left to wither, I start to fantasise about Plantasia being played over the store tannoy, and about what beautiful mayhem could ensue.