Yeah, the 'Tranquility Base Hotel + Casino' live show is weird too

I know I said this about Nils Frahm, but what business do Arctic Monkeys have at Primavera Sound? It’s an old fashioned thing to think of a festival that’s booked Arcade Fire and The Strokes in the past few years, but plenty are thinking it – those who have traditionally chosen Primavera over Benicàssim and drone rock over lad rock. There’s going to be a lot of bucket hats tonight. And there are.

There’s no question that there’s a vibe this evening that feels alien to Primavera – a vibe that sings the guitar lines, that has a bald British bloke shout “Come on you fuckers!?” at the end of ‘I Bet You Look Good On The Dance Floor’ (tossed out third in the set), either in appreciation of a “proper band” or in anger at the instantly disinterested crowd around him.

This guy, I’m pretty sure, did not enjoy the rest of the show, which broke down like this…

Arctic Monkeys are no longer four mates expertly but dimly bashing through superior indie songs – and that’s a good thing. For a start, they’ve got all sorts of help up there now, including a keyboard player and a third guitarist doing Alex Turner’s parts on the songs he’d rather thrust around the stage to. Turner – a constantly baffling spectacle – does play his instrument plenty, although on some songs he simply wears a guitar for a bit and takes it off mid song. Similarly, a fledgling pianist, he sits at an electric piano for parts of the new ‘Tranquility Base Hotel + Casino’ songs (there are 5) only for this new ghost pianist behind him to do most of the playing, especially on ‘One Point Perspective’. 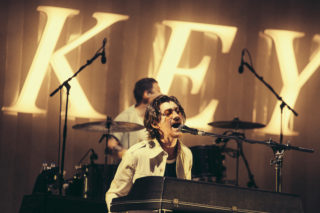 But let’s talk about what Alex Turner is wearing, because it’s important. He’s wearing an off-white, borderline safari suit with a Vegas Elvis collar, a black T-shirt emblazoned ‘What Would Dolly Do’, black Cuban heals and the tinted glasses of Hunter S. Thompson and/or Frank Butcher. He looks ridiculous and brilliant at the same time. Is it a costume or an extension of his perpetual self-indulgence; another duck dive into a ’70s rock and roll breakdown cliche that shouldn’t even be possible in 2018? We’ll never know, but the fact that Alex Turner is dressed like this already makes his band a thousand times more interesting than late career Oasis, say, or any contemporary band with a huge draw.

Just as ‘Tranquility Base…’ is Turner’s album, this is his show. He bizarrely sleazes it up not just for the opening ‘Four Out of Five’ but onward through what is more interesting than a greatest hits set thanks to the inclusion of tracks like ‘Why’d You Only Call Me When You’re High’, ‘505’, ‘Pretty Visitors’ and ‘Cornerstone’.

It all sounds pretty good, doesn’t it, like everyone there is going nuts. They’re not.

A lot of people seem to have not forgiven the band for their new album. As the night goes on, though, there’s a bigger problem – how the band are performing the old songs that they love so much. After all, nobody can be down on how many new songs are played versus the good old days. The new lounge band set up tempers a lot of the older tracks and smooths them out, bringing them more in line with the odd mood of ‘Tranquility Base…’ – a mood that they’re clearly not into right now.

The band preempt the reception to ‘One Point Perspective’ by sailing straight into ‘Do Me A Favour’ – no space for silence over applause. Then Turner ramps up his contrition by purposely crooning just out of time on some songs and saying on mic “Primavera, you can’t be sure of this shit,” not once but twice through ‘Arabella’. 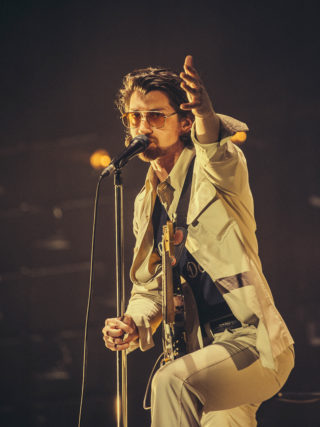 I’ve always been an Arctic Monkeys fan, but a measured one. The first two records – yes please. ‘Humbug’ – three brilliant songs on an album of thin, dull desert rock, but good on them for trying; ‘Suck It And See’ – a hard pass; ‘AM’ – a clear masterpiece; ‘Tranquility Base Hotel + Casino’ – I’m in the real stinker camp. I’d like to convince myself that it’s genius purely because it’s so bloody minded, but I can’t. I’m calling bullshit on it, for the Robbie Williams-lite (who’d have thought that that would ever be a thing) lyrics on ‘One Point Perspective’ in particular and the Chris-Morris-parody feel of the whole thing.

That’s where I am. I’m still there after tonight, even if the new tracks do sound much stronger live, due to the fact that Turner’s vocals aren’t so obnoxiously high in the mix. Still, I’ve never liked Arctic Monkeys the live band more than I do right now, and that’s thanks to this heap and Alex Turner either losing his mind or pretending to to fuck with us (either is possible). I’m not saying that because the stag do in the mini clown hats are having a tantrum about what they’re watching (although inadvertently I suppose I am) – I’m saying it because we’ve all seen Arctic Monkeys prove themselves as a hot live band in the restrictive world of indie rock. But what now? Fifteen more years of playing it straight – a British Foo Fighters who play their records loud and true but with no humour or variation?

Tonight the band do a bit of that, and it almost cruelly reminds most of what once was. ‘Do I Wanna Know?’, ‘View From The Afternoon’ and the closing ‘R U Mine’ are the band flexing their control and making clear their decisions. All are thrilling moments but more so for the surrounding weirdness. We don’t need wall-to-wall of that. We need Alex Turner creeping around a stage in a white suit, openly questioning his life choices, wearing a guitar but not playing it, adapting his songs to his egotistical mood, quite possible fucking with us. I’m enjoying the riddle of Arctic Monkeys, in the minority at Primavera Sound, as one of the few that clap at an otherwise stoney silent end that comes 15 minutes before the band are scheduled to leave the stage. Come on you fuckers!

Check out all of our reviews from Primavera Sound 2018. Plus, listen back to our #CreatedInBarcelona playlist series with guest mixes from local Primavera performers Mujeres, Tutu and Za!.