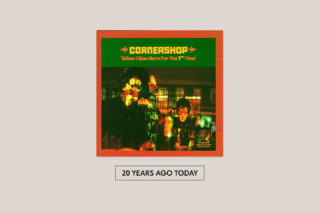 ‘Be Here Now’ didn’t kill Britpop straight away – indeed it was only a year or so later that the album even started to be identified as the fatal blow. Instead, as the schools went back in 1997, Britpop was staggering on with a strange sort of triumphalist denial, and continued to do so at least until Christmas, oblivious to its increasing irrelevance and with ever-diminishing returns.

From a storytelling point of view, that organic decline is rather a shame: had Britpop gone supernova with the release of Oasis’ third album, there would have been no finer record poised to fill the vacuum – to be both antidote and palette cleanser, safe hands and new broom – than ‘When I Was Born For The 7th Time’, released twenty years ago today.

Geographically, stylistically, psychologically and politically, ‘When I Was Born For The 7th Time’ is one of the great oppositional, nonconformist albums of its era, both within itself and in the context of the world around it. It revels in clashes of all kinds – of genre, ethnicity, production fidelity and lyrical tone – and nods towards a hitherto unexplored method of making, encountering and understanding pop, one that acknowledges the global spectrum of musics gone by and is unafraid to create an intricate, technicoloured tapestry from them.

Against a backdrop of Britpop’s growing solipsism, that spice has even more piquancy; even alongside the more creatively progressive vanguard of 1997, its individuality puts it at the head of the pack. Twenty years on, too, the album’s patchwork nature is impressively predictive of where we find ourselves today: in the post-genre era of instant streaming and curated eclecticism, ‘When I Was Born For The 7th Time’ is an exemplar of refined taste, executed with nuance and authenticity.

Indeed, crucially for the album’s personality, and key to its success, is that at no point does it feel like a grab-bag of cultural appropriation. Instead, there’s the ongoing sense, as the album bounds through bedsit funk, droning devotionals, field recordings, jangly indie, smoky trip-hop and even country balladeering, that this is all just stuff that Cornershop had simply adsorbed while being music fans. There’s no fanfare to it, no desire to tell the world that it is listening to An Important Musical Statement like some of Cornershop’s peers tended to do. Indeed, Tjinder Singh’s unassuming vocal delivery and the band’s penchant for finding a neat groove and sticking to it provides ‘When I Was Born For The 7th Time’ with an enviable sense of effortlessness. This, Cornershop may as well be saying, is nothing more than a well-travelled musical sponge being wrung out onto tape.

Beneath the laid-back exterior, though, there’s hidden complexity. Whether it’s the careful editing of intriguing field recordings on the central pairing of ‘What Is Happening’ and ‘When The Light Appears Boy’, or the textural constructions (both sonic and thematic) of ‘It’s Indian Tobacco My Friend’ and ‘Butter The Soul’, little here feels accidental. Indeed, much seems precision-engineered to provoke: the decision to append the English words “IBM”, “Coca-Cola” and “motherfucker” to the end of an otherwise entirely Punjabi-sung ‘We’re In Yr Corner’ comes over like a challenge to check if the lazy materialists and wannabe-subversives are keeping up. Equally goading is the closing cover of ‘Norwegian Wood’: translated by Singh into Punjabi but otherwise faithful to the Beatles’ original, sitars and all, it re-recontextualises the sound of traditional Indian instrumentation at the end of an album slathered in it, rendering the song less a cover and more a rather tidy, politely insurgent reclamation.

And that’s without even mentioning ‘Brimful Of Asha’, another serene, tumbling groove of a song that became bigger than Cornershop themselves after Norman Cook remixed it in February 1998, but which remains, in its original state, both one of the crispest and one of the most original exultations of music’s therapeutic capability. In common, ironically, with a lot of Britpop, the song is unabashedly nostalgic, name-checking bygone heroes and record labels, but the act of Singh taking a piece of his particular heritage and then reshaping it to become part of the general pop lexicon feels so generous that any sentimentalism is quickly forgiven. It helps that it’s so durable, too: the list of cultural touchstones mid-song (“Trojan Records! Argo Records!”) has not become any less touching in the intervening decades, and when the imagined “77,000-piece orchestra set” surfaces at the song’s end, it must be a stony heart that doesn’t flutter a little.

The timing of ‘When I Was Born For The 7th Time’’s arrival twenty years ago today should’ve been enough to amplify its diametric opposition to Britpop’s empty posturing; in an alternate reality, perhaps the album is loved as widely as it deserves to be. In the present one, however, it was initially ignored, dropping out of the top 100 after just two weeks and only returning sixth months later after the remix of ‘Brimful Of Asha’ hit number one in the singles chart. (Indeed, perhaps the album’s only unintentional move is its most concrete legacy, that of helping to elevate Fatboy Slim to dance music megastar.)

Even then, though, the pogoing reincarnation of ‘Brimful Of Asha’ seemed to mute the broader impact and wisdom of the accompanying album, not to mention Cornershop themselves, who wouldn’t reappear until well after the turn of the century. Then again, there’s a sense that that underexposure has rather embalmed the record for the ages: today, amid immigrant-fearing Brexit Britain and a musical culture dominated by magpie misappropriation, ‘When I Was Born For The 7th Time’ feels more relevant than ever. Perhaps timing isn’t so important when an album’s as enduring as this.