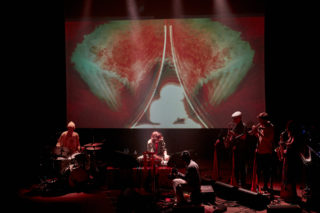 In the four and a half years since James Holden returned with his analogue-techno/pagan-jazz/post-synth behemoth ‘The Inheritors’, it feels as if he’s barely been away: between gigs with Gnawa music legend Maâlem Houssam Guinia, Barbican celebrations of minimalist composer Terry Riley and improv performances alongside percussionist Camilo Tirado – not to mention his own shows featuring RocketNumberNine drummer Tom Page – the trance DJ-turned-musical polymath’s appetite for musical foraging appears to continue unsated.

But despite his ubiquity, tonight’s show still retains a certain sense of occasion. After all, this is the UK debut of Holden’s Animal Spirits project, itself the direct natural expansion of ‘The Inheritors’’ blueprint of creaky, characterful electronica, and therefore a more substantial aural meal than his previous collaborative amuse-bouches: indeed, the prospect of witnessing Holden’s recorded folk-trance workouts spattered by a writhing six-headed monster of percussion and ecstatic brass and woodwind is rather mouthwatering.

However, where previous outings of Holden’s solo work have mutated his sinewy compositions into muscular, brawny bangers, the Animal Spirits choose instead to continually smoulder for the first hour tonight, only allowing brief flickers of real fire to jump from the mix. On the one hand, that restraint provides gorgeous detail – Liza Bec’s fluttering clarinet flourishes on the ghostly, droning ‘Blackpool Late Eighties’ offer both height and depth, and the loping, looping ragga raga of ‘Gone Feral’ is stretched to a point of glorious danger by Page’s and Lascelle Gordon’s duelling percussion. ‘Spinning Dance’’s disciplined resistance of route-one bombast, too, simmering psychedelically just below full boil for a full 10 minutes, generates genuine suspense. 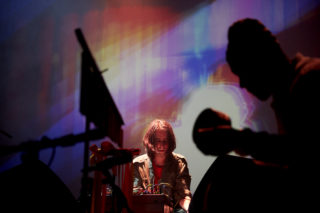 On the other, though, the imbalance of tension and release is occasionally a little tiresome, and the band’s decision to play individual pieces tonight rather than meld them together saps the energy from the room during each rather pregnant pause.

Perhaps realising this, however, the Animal Spirits barrel through the last half hour with far more intent, first redefining the wickedly deviant ‘Caterpillar’s Invention’ into something more dolorous (and, in doing so, proving what a wonderfully malleable track it can be), and then hitting top speed with a warm, gambolling take on the album’s closing track that finally matches its recorded counterpart’s euphoria, as the cornet and dual saxophones emerge rather beautifully from the murk.

It makes for a surprisingly pure climax after so much earlier obsession with texture, but a satisfying one nonetheless: Holden’s latest live incarnation might be his knottiest yet, but his knack for delivering distilled packages of disconcertingly straightforward joy endures. 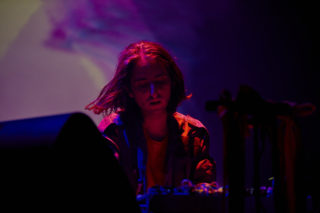