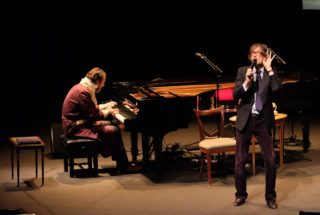 With both arms behind his back, Cocker struts on stage, hauling a long-haul suitcase from behind. “Alright?” he shrugs. Bell bottoms, blazer, tie and Cuban heels to boot, it’s his usual attire. Costumes aren’t necessary when you’re Jarvis Cocker. The crowd chime, as if met by a family member.

Welcome to ‘Room 29’. The musical entertainment project created and performed by Chilly Gonzales and Jarvis Cocker that’s based around the Chateau Marmont, the famous Hollywood hotel located on Sunset Boulevard. It’s served guests including F. Scott Fitzgerald who had a heart attack in the hotel’s lobby and Jim Morrison who fell off its rooftop. Names may be dropped by the dozen, each with a story weightier than the last – and it’s in Room 29 where sometimes these mishaps happened. Room 29 is infamous. It’s LA’s sweet suite of debauchery.

Tonight, the duo have gone about creating that world in detailed fashion. On entering the Barbican Theatre, ticket-holders are met with a concierge who hands over a key. Immediately, each member of the audience is part of the experience. Rather than being onlookers, we’re in the hotel room, part of it, under the bed sheets (well, nearly.) Across from our seats is a grand piano, a bed and a cupboard. Gonzales, clad in plush dressing gown and slippers, stays put at his ivory saloon, while Cocker romps about on stage serenading the crowd, taking full reign of the hotel room’s furniture.

As ever, his performance is all about the silhouettes. He dangles his elbows at puppet-like right angles as he conducts his lodgers through the hotel’s history. References to Howard Hughes, Clara Clemens and Jean Harlow make for an educational induction, while frequent comedic detours are but a phone call away. He’s a good host. Asking the crowd what they’d like from room service, he orders The Kaiser Quartett, a string band from Hamburg. They’re no chocolate gateau, as one member of the audience suggests ordering – but, none the less, they are the perfect seasoning to a night of musical brilliance.

It’s a run through of the album they’ve just released, led by Gonzalez’s coasting piano that hums gentle exhaustion. Cocker exhales over the title track. “Help yourself to pretzels, help yourself to the minibar. I couldn’t help myself. I read a self-help book, now I’ve gone too far.”

It’s a sophisticated soiree, but not without wit. As it comes to a close, Cocker wraps it all up with a marvel: “This whole place was built on a lie… But what a lie!” 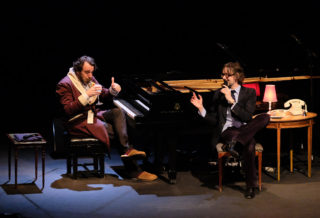 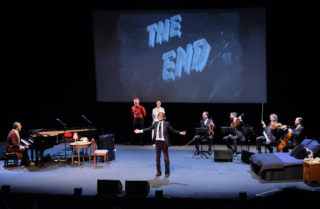 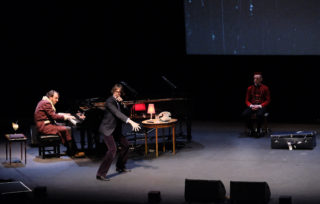 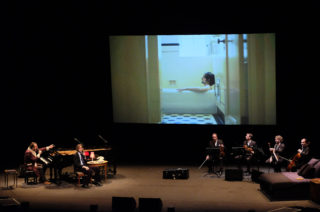