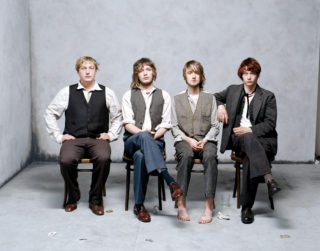 In 2005, Edward Leeson became obsessed with guitar music and formed a band. Just two years later, Larrikin Love was over.

The whole thing happened very very very quickly – from meeting [the band], getting signed, making an album and splitting up, it was a couple of years. Thinking about it now, it was a really funny, wild time, because I hadn’t listened to guitar music, ever. My whole childhood, I was into garage and drum’n’bass and jungle, and then when I was 14 I was really obsessed with grime, and that was all I would listen to.

Everything happened in six months, for me. I went to college, and I get very obsessed about certain things – within a day I can find something and be so obsessed with it that I have to be involved in it immediately, but then it passes very quickly also. After two months, I met Alice [Ed’s now wife] and she introduced me to all these classics that I’d never paid attention to, like The Clash and Jeff Buckley, Tracy Chapman – shit you should know but I didn’t. I got a job in OddBins and moved into a flat near Twickenham. It was so disgusting – the windows kept falling out, and I got trench foot in my sleep – but it was a very romantic time, and I just had to find some people to be in a band with, so I went out with the sole purpose of that. I didn’t want any niceties; I just wanted to know if they’d be in this band with me. Alfie wasn’t our bassist at first; he was our manager. But I met them and had four really rubbish songs. We played two or three gigs and then these girls [Young & Lost Club Records] contacted us and asked if we wanted to put out a release. Really quickly after that four or five labels wanted to sign us, but nobody saw it through apart from Warner Brothers. We were really young – Cozzy had to get his mum and dad to sign the deal because he was just 15 or something.

The best thing about those guys was that they were so open-minded, whereas I maybe wasn’t, because I had this weird tunnel vision. But as soon as I got hooked on guitar music, I was soon over it as well, and I don’t mean that in any disrespect to the others, because I know they really enjoyed it, and I really enjoyed it, to an extent, but I definitely didn’t enjoy touring – we were partying way to hard and certain events happened and it was getting out of control. I don’t know what happened, but I left the last tour for a bit because I was shitting blood. My liver was fucked up. I wasn’t equipped for that lifestyle. Tensions grew and it separated a bit. And it’s no-one’s fault – and it’s least of all their fault, it’s more my fault – but it became me and them. After the show they’d go off and party and I’d just sit on the bus drinking until I fell asleep. It was just quite lonely, and a bit awkward.

Certain things happened. On stage once someone hit me with a bottle during our first song. I walked off the stage, and they all came off and were like, ‘Ed, don’t be such a diva, get back on there’. I went back on stage and I remember being really wound up, and I had a drumstick and I was hitting Cozzy’s drums out of time, really sabotaging shit, and then another bottle got thrown, and that was the beginning of the end – I did this awful thing where I stormed off stage and I went upstairs and destroyed all of this electrical equipment in our dressing room. I was crying and going mad, and they came in and it transpired it was our tour manager’s printer and hi-fi, and everyone was so fucking angry with me.

A tension had snapped. We went to Japan after that, and had a great time, but after a fortnight of partying I flew home on my own, on a completely empty plane where Arctic Monkeys were in first class, and I thought fuck this. When I got home and called our mangers they were like, ‘Is it over?’. They knew it was coming.

I think there might have been some bad blood because [the band] were really happy doing what we were doing. They were such sweet people – completely unpretentious, genuine people – who loved playing music, way more than I did. Playing guitars and drums had been part of their childhood, and it hadn’t been part of mine. And so for me to chuck it away so quickly I think really offended them. I think for a long time after they despised me, because I ended it all, and in a way I wish they’d carried on without me, because I didn’t want to be responsible for ending this great fun time. I do feel regret for that.

I remember when I told them, I drank two bottles of wine to muster up the courage, and they were all really lovely. They cared for me more than I had realised. I was explaining to them why I wasn’t able to do it anymore, and they understood and any ego went to one side.

I’ve finally learned that although I might be embarrassed about my past, or whatever, as most people are about things they did when they were young, for some people we were a coming of age band, just because we came out at the right time for them, and it’s pretty arrogant and unfair to dismiss it and the pleasure that other people got out of it, or still do.