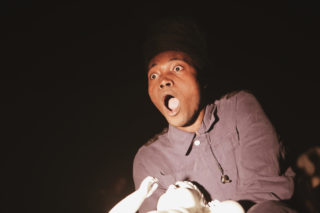 “Where is my piano?” says Benjamin Clementine, repeating a question from an audience member midway through his surreal new stage show. “It’s in my pocket,” he replies, looking down at his boiler suit, “can’t you see it? I can.”

There’s no piano. Instead, on stage there are two plinths. One has a drum kit on. The other a large bass amp. Three undressed mannequins from your local GAP form a triangle on stage – figures of a pregnant woman, and two infants. The show begins with Clementine and his two bandmates – dressed in navy overalls with bare feet – walking in a figure of eight around the risers as the opening strains of his recently released second album ‘I Tell A Fly’ play out. 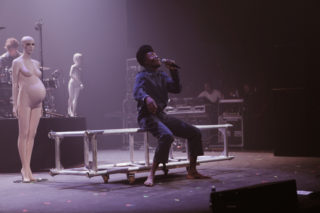 Immediately it’s obvious that this is a very different offering compared to the shows the north Londoner performed in support of his Mercury Prize-winning debut album. In the past he cut a mild, softly-spoken, coy figure shielded behind his piano. Now, he doesn’t spend a minute of this show stood still. When he’s not cradling a plastic child, sacrificial offering it to the people in the front row, he’s scooting across the theatre’s creaky floorboards on a piece of scaffolding on wheels. In fact, it’s a performance completely jettisoned from those early days. So much so, he doesn’t play a single track from ‘At Least For Now’. The whole spectacle is so entertaining – a theatrical cor-blimey mish-mash of Oliver Twist and The Lion King – the absence of tracks like ‘London’ and Winston Churchill’s Boy’ are hardly noticeable.

So, yes, it’s bizarre, but it’s an hour that’s never not absorbing. The first time he speaks to the seated audience in Iceland’s ’50s-built National Theatre is more than half-way through – a five minute conversation where he remarks on how expensive his drummer’s dinner was, question why the venue doors are open and conduct a short Q&A on how much Icelanders pay in tax. 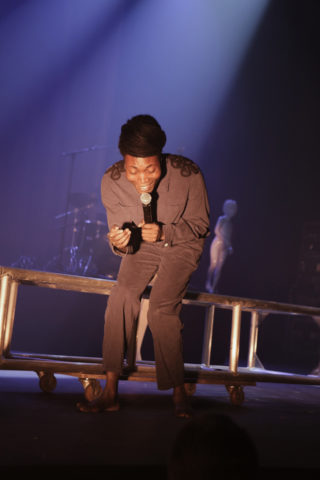 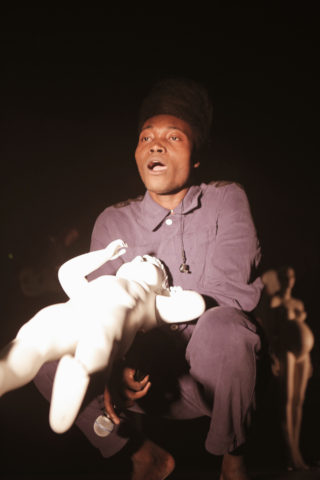 For many, ‘I Tell A Fly’ was a bit much. An album so expansive it was off putting. But here, performed almost in its entirety the songs are much more enjoyable, the moments of pacey bombast (‘Phantom of Aleppoville’, ‘God Save The Jungle’ and, in particular, ‘One Awkward Fish’ – a Dickensian take on drum ‘n’ bass) embellished by a tight, loud backing duo make more sense in a live setting.

It’s ‘Jupiter’ (Clementine’s ode to America where he wrote the album, but also a reflection on his own outsider status) that feels most appropriate. “An alien passing by…” he sings in that distinctive voice. This visit feels exactly like that. 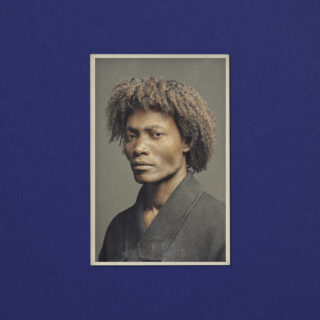 Like Jacques Brel interpreting James Joyce, Benjamin Clementine is back