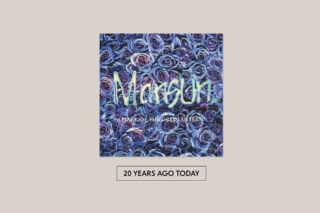 Sam Walton reckons 1997 was a great year for albums, this week he revisits one of its biggest debuts

There’s a decent argument that Mansun should’ve been the toast of 1997: after all, ‘Attack Of The Grey Lantern’ was one of only three debuts to top the album charts all year, and to give that achievement context, the other two were the Spice Girls’ ‘Spice’, released the previous November, and Gary Barlow’s first effort post-Take That. What’s more, at a time when successful new bands were thin on the ground relative to the past two or three years’ avalanche, Mansun accomplished their feat while also attempting something markedly different to most of their peers.

That they weren’t, then, and that ‘Grey Lantern’ tends to go overlooked in surveys of its era, is potentially curious. On one level, its sidelining could simply result from other huge releases later in 1997 dwarfing it. There could also, however, be something a little more personal at play – that for all its enjoyably lofty ambitions, broad horizons and glances towards prog-rock, ‘Grey Lantern’ is also a bit of a fascinating mess, a record that’s maybe more interesting to pick over than to applaud.

Perhaps the most instantly noticeable contribution to that confusion is the album’s stylistic restlessness, which saw Mansun attempt less to coalesce their influences than just to present them one by one, often within the space of a single song. Accordingly, the album’s opening John Barry theme pastiche on ‘The Chad Who Loved Me’ yields mid-way to ‘I Am The Walrus’-style vocal compression and then again to simmering orchestral mood music, before smudging into the vinyl scratches and synth washes of ‘Mansun’s Only Love Song’.

On the one hand, a palate broad enough to accommodate film soundtracks, psychedelia, hip-hop and electronica into the opening 11 minutes of an album is a tribute to Mansun’s rapacious musical appetite, and even more impressive in early 1997 than in today’s post-everything, internet-enable landscape. Listening now, though, it’s often hard to escape the feeling that ‘Attack Of The Grey Lantern’ is under attack from a barrage of kitchen sinks, perhaps the most extreme example arriving when ‘Taxloss’’s agreeably cheeky ‘Revolver’ quotations flip to throbbing acid house for its second half. The effect is undeniably engrossing, but the incongruity feels forced.

In the passages during which the band sit on their hands a little more firmly, though, ‘Grey Lantern’ is a delight. Indeed, the six-song run from ‘You Who Do You Hate’ to ‘Naked Twister’, despite still being distracted occasionally by shiny add-ons, discovers a subtlety absent not just from the album’s opening section but also from huge swathes of British music that immediately preceded it – and in that intensity of concentration lies the record’s appeal. ‘Wide Open Space’ and ‘Disgusting’, in particular – the former with its soaring gleam borrowed from Radiohead’s ‘Lucky’, the latter with its swaggering slink edging almost into funk – showed exactly how coherent and persuasive Mansun could be when they weren’t obsessing over themselves.

But self-obsession too often gets the better of ‘Attack Of The Grey Lantern’. The self-mythologising video for ‘Taxloss’, at pains to explain to its audience just how clever it thinks it’s being, is perhaps the most egregious example, but the hidden track, in which Paul Draper informs his public that the album they’ve just heard is meaningless (“You believe all of this, you can’t see it’s a spoof,” he snarls) comes over not as some witty disclaimer at the end of a knotty album, but simply as superciliously snotty. It leaves a sour, contemptuous taste, and an album that could have been a bracing faceful of ice-cold water after Britpop’s intemperance exits instead with a shrug as smug as its forebears.

With recurring themes and characters, and a whiff of storyline, ‘Attack Of The Grey Lantern’ had the vague markings of that most pungent signifier of Serious Music, the concept album. However, Draper admitted while promoting the record that the idea was undercooked, leaving it as just “half a concept album – a con album”. He might’ve been closer to the truth than he intended: like all well-executed confidence tricks, ‘Attack Of The Grey Lantern’ is initially confusing, temporarily seductive but with enough hindsight – say, 20 years of it – ultimately outed as a sham.

Also out this week in 1997:
Gene – ‘Drawn To The Deep End’. Chart peak #8
To read all the other entries in Sam’s Twenty Years Ago Today blog, click here.