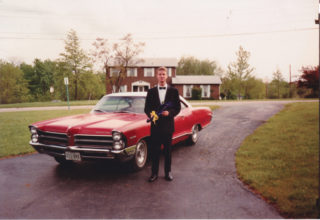 He spent it dancing at proms and on riverboats

Matt Berninger: I don’t even think this photo was taken on prom night. I got invited to dances a lot, and I was one of those nice guys who would go to a dance no matter what – not matter who asked. It’s not like I got asked by the cheerleading squad, but I’d say yes to everybody. I remember going to a lot of dances in high school – even friends of my sister, if they didn’t like any of the guys it would be, like, ‘Rachel’s brother, Matt, will go with you. And he’s a pretty good dancer.’ I’d do that head-down-pivot/sway thing – that alternative dance; the trench coat, funky haircut thing. The way you would dance to Depeche Mode – I’d have to show it to you – that was my stock in trade. I’m still a good dancer. At weddings I’m a heck of a lot of fun, although the funny thing is that I never dance on stage with The National.

The car I’m stood next to is my grandma’s, which she let me borrow for that dance. I wanted to make a splash with the Cadillac. And that’s the house directly across the street from my house, where my best friend John Capman lived.

The nightmare part of the dance was always the party afterwards. In Cincinnati there was this thing where people would rent out rooms of hotels – some shitty motel, across the river in Kentucky – and they were these awful parties. I remember being stuck in a hotel room with a girl who’s the sweetest girl, and we’re good friends, but there are other people in the room making out, and I think there was actual intercourse going on in the room, and we’re just sitting on the floor chit-chatting, and trying to pretend that it wasn’t the most awful situation we’d ever been in.

I was a pretty awkward teenager, and a very late bloomer. I went to a lot of dances but I didn’t get any further than a goodnight kiss until I was in college. And it doesn’t look like it from this picture, but I was always in combat boots and trench coats and thrift store clothes. I was listening to The Smiths, New Order, Depeche Mode, Ministry… whenever I hear ‘Love Vigilante’ by New Order I’m totally right back there.

There was a riverboat that this radio station 97X would rent out once a month and you could be underage to get on the boat, and once you were on the boat you could buy beer, and it was nothing but alternative music, and a lot of British bands. I was obsessed with all that. A boat full of teenagers in black makeup; goth kids drinking beer, dancing and smoking cigarettes. One night a month that side of me could come out. I’d kind of conceal that goth in me when I was in school and pretended I liked Rush and AC/DC.

This was all in 1987 and it was a great time for that music. It was that one radio station for me, and if it hadn’t been for that station I would be a completely different person, and I definitely wouldn’t be making the kind of music I’m making now. I probably wouldn’t be in a band at all.

My school was an all-boys Jesuit high school, which meant that right when you’re supposed to be learning how to understand and respect each other and communicate with women on a real level, you’re not around any. It made me the romantic obsessive that I am, because I fantasised so much about love and romance because there was none around. I could never listen to Van Halen – I was pining for romance, so The Smiths spoke to my longing and feeling like a misfit. Everything Morrissey was singing about, that was me. I’d drive around in my car delivering pizzas (I had all these different jobs) and I was this misanthropic, bitter, hopelessly romantic, desperate guy. And I’d go to the door and it would be a house having a Super Bowl party, and I’d gotten to that bitterness of ‘I hate the world; I don’t belong here.’

But I had no plan or thought of being a musician at all, until I met Scott Devendorf in college when I was 21. Music was just something I absorbed, but it wasn’t something I wanted to do because I didn’t know how. And even when I did start with Scott, his band let me sing because I was maybe more full of myself in a funny way and I had the gall to stand up and pretend that I could sing – it takes a certain amount of delusion to think that people should watch you sing a love song, and the other guys were a bit more reserved. If I hadn’t met Scott Devendorf I’d still be a graphic designer, making websites, probably.