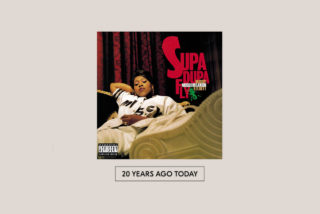 This series has revisited albums from twenty years ago that are frequently heralded as the greatest of all time, forgotten classics or unsung gems, but ‘Supa Dupa Fly’ fits none of those categories: it’s too uneven to be truly great, too loved to ever be forgotten and, having sold the best part of two million copies, it’s far from underappreciated. Nevertheless, there’s a decent case to be made for Missy Elliott’s debut album being not just the most influential record in this series, but furthermore one of the biggest single influences on much of the past 20 years’ best pop music.

Indeed, with perhaps the exception of Daft Punk’s Homework and its proto-EDM thrum, no other album casts a longer shadow over the Top 40’s last two decades: if RnB and hip-hop, with increasingly electronic (rather than sample-based) production and bolstered by eye-catching videos, became the charts’ preeminent musical form in the noughties and beyond, it was ‘Supa Dupa Fly’ where that was forged, from the combination of Timbaland’s futuristic, almost-experimental production style and Elliott’s chutzpah.

As a result, revisiting the record today feels less a nostalgia trip and more like an archeological dig, where weathered and raw versions of now-refined household objects are unearthed: there are the germs of Beyoncé’s solo RnB diva incarnation in ‘Best Friends’, the meaty, tumbling minimalism of ‘I’m Talking’ presages Outkast’s imperial phase and, elsewhere, flecks of Drake and the Weeknd’s combination of robotic slow-jam with drawled rapping pepper the tracklist, alongside Rihanna and Nikki Minaj’s no-fucks-given sass. More than anything else, the twin punch of ‘The Rain’ and ‘Beep Me 911’ alone seems to comprise the blueprint for some of the next twenty years’ best standalone singles. Without them, you sense that ‘No Scrubs’, ‘In Da Club’, ‘Try Again’, ‘Milkshake’, ‘Dirt Off Your Shoulder’ and countless others would sound vastly different.

That’s not to say that ‘Supa Dupa Fly’ arrived out of the blue – although much of the future of pop is contained on the record, there are interesting reflections of a lot of RnB’s recent past too. The Fugees’ blend of RnB and hip-hop receives particular attention (Lauryn Hill gets her own shout-out on ‘The Rain’; ‘Sock It 2 Me’ uses a sample of the Delfonics’ ‘Ready Or Not’, the song that birthed the Fugees’ number-one single from the previous year, and ‘Why You Hurt Me’ is a natural continuation of ‘Fu-Gee-La’), but ‘Supa Dupa Fly’ now sounds like an progression of the ideas that were forming with the likes of Dr Dre in the mid-90s, further refined and finessed into a sleek presentation. (That Dre’s ‘2001’ from two years later, owes so much sonically to ‘Supa Dupa Fly’ is no coincidence).

Halfway through ‘They Don’t Want To Fuck With Me’, Elliott pauses her rap for a moment. “We don’t gotta rhyme through the whole track – the track is bangin by itself!” she insists to Timbaland, allowing the pair’s skittering beats to play out ungarnished for 16 bars. She’s right, too – the looped two-note phrase, although almost uncomfortably stark, also manages to be deliciously addictive, hypnotising with its expansive swagger. You could listen to it for an age.

Today, it seems inevitable that that space-age aesthetic would become the de facto sound of the charts for years hence, and Elliott and Timbaland would expand their template even further as less imaginative copycats sprang up in their wake. However, at the root of it all, and consequently of so much pop music history, is ‘Supa Dupa Fly’, and that’s its finest legacy. For all the words written about the genius of, say, ‘Ladies And Gentlemen We Are Floating In Space‘, very little truly popular music sounds like that now. By contrast, ‘Supa Dupa Fly’’s fingerprints (albeit a little smudged) are still all over the charts. Popularity is no measure of artistic achievement, but when it’s combined with the sort of wild innovation that Elliott found here, it’s a hard heart that would begrudge the record’s multifaceted success.