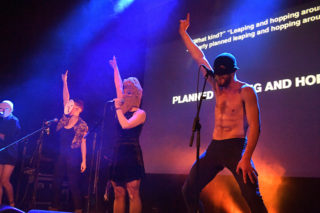 Speaking to Loud And Quiet in September, Pussy Riot’s Maria Alyokhina said that she never expected to be arrested, but then what started as a protest for equality and freedom of expression quickly became one charge of hooliganism and a two-year prison sentence.

Her “punk prayer” had made its guerrilla debut half a decade earlier. In February 2012, Pussy Riot gained notoriety when they burst into a Moscow cathedral and performed at the altar; guitars in hand, colourful balaclavas covering their faces like French Fancies, frenziedly waving and punching the air to varying mantras. It’s clear where the protest was aimed: “Shit, shit, the Lord is shit!” / “Virgin Mary, Mother of God, become a feminist […] put Putin away!”.

The retelling of Alyokhina’s story of protest, arrest and incarceration exists as a samizdat book, but now a world away from the clandestine circulation of her written word, she steps onto the stage in Islington with the uncontaminated defiance of the Riot Days audio-visual live show. Standing to attention, she yells a thick introductory line, subtitles above her: “Anyone is Pussy Riot!”.

She seems powerfully solitary despite being surrounded. Two members of Russian punk rockers AWOTT patrol the stage in masks made from paper plates, sinister as they switch between instruments. A baritone saxophone phonetically mirrors each step.

Musically, it’s minimal. Slow and intense rhythms are treated harshly through Maxim AWOTT’s glitchy electronic programming, existing purely to accentuate Alyokhina’s monotonous chants. The fuzzy thick guitars of Pink Kink’s joyous support slot have been replaced by a pounding synth – a reminder that Russian feminism, while hosting the same narrative at its core to the “trans-European party punks”, is still dealing with a different type of oppressor.

This incarnation of Riot Days is darkly humorous, while intelligent lyrics paint a bleak representation of years of suppressed activism. On the screen behind the band is footage of Pussy Riot’s original punk prayer, their trial and Russian landscapes from historic revolutions to the Moscow subway. Intermittently, a slogan sprawls across in plain subliminal text: “Mother Mary be a feminist!”

As the set comes to a close, several members of the company break into raucous dance, lighting up their cigarettes and stripping out of their jackets with a firm address to the criticised authority: “Do I have the right to do this?”

As it ends, no one quite knows what to say. A woman in the audience jumps up on stage to hug Alyokhina before she runs away. I wonder how that authority would feel now, to know that 49 seconds of wrongly accused crime would result in three hours of a powerful, punk-fuelled call to arms. 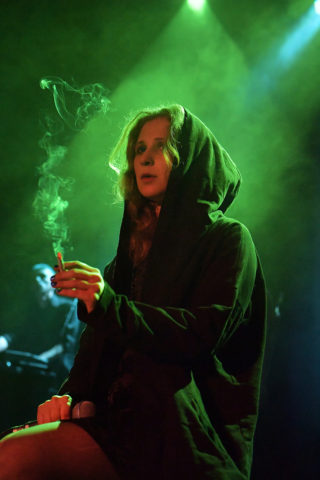 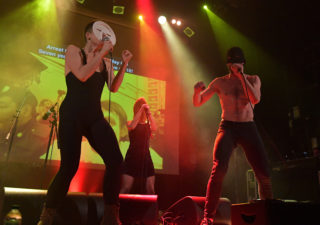 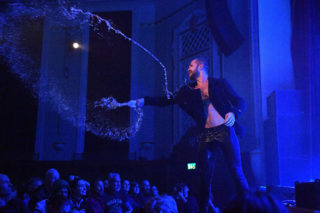