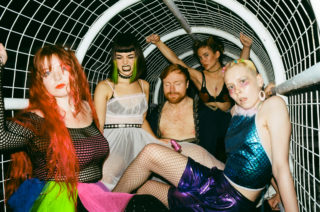 PINK KINK’s shows, mostly in the north west where they’re based, have been causing a stir for a while now.

Having met at university in Liverpool each of the five members in the collective hail from a different European country. They’re not just an outfit of clashing nationalities, but also styles (both aesthetic and musical).

Until today, they’ve not actually shared any recorded music. Now, they have, and it’s a song called ‘Bubblebutt’ (out 27 September via Big Score), a gothic-disco-punk number that clocks in at less than two minutes.

Sonically, it’s reminiscent of Chicks on Speed or The Horrors or The Cramps or maybe Gang of Four or The Moonlandingz or HMLTD. Point is, there’s a load of disparate elements being brought in the mix. A strong message to all the creeps, too.