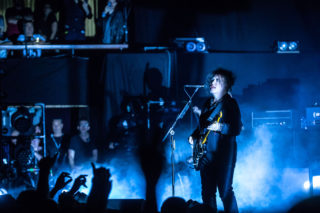 And when they got to the end - they turned around, and went back again

“Who is Robert Smith?” asks a man a couple of rows back. The woozy reply follows that “Everybody here is Robert Smith. I am Robert Smith. You are Robert Smith. The kid dancing in the aisles is Robert Smith.” It’s a statement not unbefitting of the cult fanbase The Cure has acquired over the years from an infectious and largely inoffensive collection of songs. It’s not wholly incorrect either. A man in Row C actually could be Robert Smith. A Reading FC flag is draped over the synth. The Southbank has been caked in industrial levels of beer, hairspray and gel. The iconic bird’s nest is ubiquitous, light a match and the whole place will be ablaze.

There is a reason Meltdown is the UK’s longest running artist-curated festival. Across its 25-year history the 10-day extravaganza has delved into the various worlds of the musical pantheon, from David Bowie to Patti Smith to Yoko Ono and M.I.A. Last year, this kingship was traded for carnival, with a heart of outlaws and activism introducing the most renowned concert halls to Giggs, Mykki Blanco, Young Fathers and Princess Nokia. This time we’re back, somewhat, with music’s establishment – there does seem to be a running joke on the inside, that you’re making people sit in a concert hall while you hit them with a healthy dose of Deftones, Placebo and YONAKA.

“I never thought I’d be standing on this stage,” admits Smith, “but I guess that’s what Meltdown is.” The previous nine days have seen some electrifying performances from the visually hypnotic Loop to the indie-electronic nostalgia of The Notwist. Earlier in the day, Pumarosa twisted their punk heavy debut ‘The Witch’ in full sunshine with dizzy electronics that would make Sylvan Esso drool, with ‘CORBYN’ scrawled in neon green paint across any instrument with enough space to admit it. 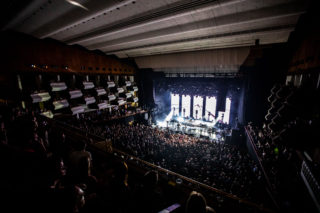 The main event takes a sombre start, though, with The Twilight Sad dedicating their support slot to lost friends in fellow-Glaswegians Frightened Rabbit, who too were scheduled to perform earlier in the week. Following Scott Hutchison’s passing, their programmed slot was committed to a panel discussion on mental health in the music industry. While James Graham has always been a captivating frontman, his exorcisms and twitches felt all the more painful as they closed on a cover of ‘Keep Yourself Warm’.

After the heartbreak, rock’n’roll debauchery was in order to see out Smith’s psychedelic puzzle of a festival. A full retrospective was promised, from “there to here,” followed by “here to there”. Basically, one song from each of The Cure’s albums in chronological order for the first half, and then back again for the second. A blissful rendition of ‘Three Imaginary Boys’ kicked off proceedings, with sludgy harmonicas and rich vocals like it was 1987 maintained throughout the career-spanning setlist. While The Cure are known now for their three-hour epic live shows, cutting the set length almost in half didn’t stop Smith and the band’s current line-up of Cooper, O’Donnell and Gabrels travelling the back-roads of B-sides and rarities.

Filler tracks were plentiful, but met always by the sea of backcombs attempting to outdo the next fanatic. It didn’t seem to matter that the touted “special guests” never arrived, or that ‘Friday I’m In Love’ remained a rather glaring exclusion for an honest retrospective. Standout single ‘Pictures of You’ was met with crisp production; a new album was teased with varying success; visuals split across four screens ranged from Windows screensavers to cigarette lighters, to amoeba; “we’re up to 1996 I think – my, how the time flies,” says Smith.

Taking a sip from one of three plastic cups filled with orange juice behind him, the night concludes with ‘Boys Don’t Cry’. A reliable performance, but somewhat muted for a festival that has come to celebrate the old while championing the new. 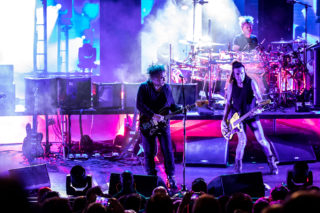 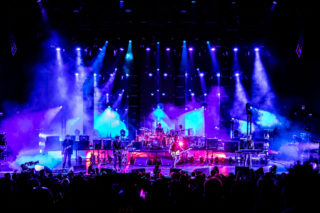