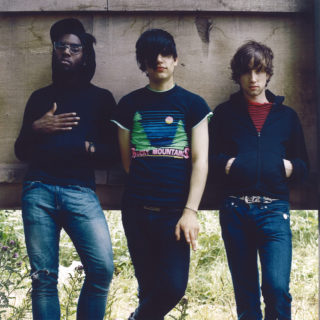 Rory Attwell remembers the year his joke band – thrash-disco trio Test-Icicles – was taken more seriously than anybody else, despite their best efforts

There was so much potential for people to hate that band, and I actually can’t believe that we didn’t get more stick than we did. And afterward I thought, surely I’m going to get some stick now, but I never really have. It’s weird, because it could have been really hate-able, couldn’t it?

I think people liked it because it wasn’t… uncontrived might not be the right word, because it was contrived… but there was no pretence. It was just three people dicking about, and we weren’t even really making the music we liked, we were just making some music. There was no agenda at all – it was like, ‘let’s do this because it’s funny’, or, ‘let’s do this because it could be interesting’, and the finished product wasn’t really anything that any of us thought was something really worth doing. And people could see that we didn’t really care. We wore really stupid clothes, because we knew people who worked in shitty second hand shops, so we’d wear the stupidest clothes we could find.

We always said that we were only going to make that one album, and I like that about it. It was like an experiment, and when all these people got excited about it, it was quite odd.

I was living in the same room as Sam off a quid a day. We didn’t have any money and were just jumping on trains and sneaking into clubs. The band was just a stupid thing for three people who didn’t have anything else to do. And then suddenly we had all of these people like Virgin offering us these massive record deals, and even though we were broke we still told them to sling their hook, because it was really funny to.

Maybe we should have taken the cash, but it was funnier to tell the head of Virgin Records that you didn’t care. We went there and took a bunch of CDs, came back and talked some more about it, and then said no. And this guy got so angry and so upset about it. He was shouting, “We signed The Sex Pistols! We signed Devo!” And then he said to Sam, “You, the weird one, what do you think about all of this?!”, and we just left. I don’t think he’d ever been told no before. It was really funny, and I think it’s almost worth missing out on all that cash for that moment.

We had lots of meetings with labels, even though we weren’t sure we wanted to even release a record. Domino got it to an extent, and I really liked them anyway. I don’t think we would have even released it if I hadn’t been so obsessed with Domino. We told them at the start that we only wanted to do one album, and they didn’t really believe us – they thought we’d go on tour and have a great time, but if anything, it had the opposite effect. Sam especially, it totally did his head in. He was struggling with it. He hadn’t found it funny for a long time. In the beginning he did, but as it got more popular and serious, I think he felt like he was doing something wrong, like, he shouldn’t be doing this silly thing and it doing well.

The problem was that we were three quite unusual people. Sam is a really creatively intelligent person and talented musician and a little bit barmy, as well, as most people like that are. And Dev is similar as well – he’s a talented guy, but he’s got his own things going on in his head – and I suppose I’m probably a bit like that as well, and having three people like that in a band is not really healthy. If you have someone like Sam in a band – who is bordering on genius, I think, and is one of the most talented people I’ve ever met, but he really struggles to keep a lid on it – you need one person like that and three other people to look after them and make sure they’re doing alright. Whereas we had three really destructive people in the band, which started off as really funny, but after 6 months of that it just got more and more destructive. We didn’t hate each other but we were driving each other mental.

The thing I liked about it most was that we weren’t putting any thought into it and we did really well, and there were loads of bands trying really hard who didn’t get anywhere. I think that’s really funny. If there were more bands doing things for the sake of it – for it being funny, or an experiment, or a means to an end, as opposed to worrying about where it’s going to get them – they’d probably have a better chance of doing well. There needs to be more kids doing things for the fuck of it, because everyone is so well versed in everything that’s going on now.

Other bands used to get upset with us, because they could see that we were fucking about. We’d play a gig with someone who was quite good, who we really liked, and it would be quite embarrassing because you could tell that they hated you, but you could also tell that they were a little bit jealous that you were doing so well with something that was so crap.

My lasting memory of 2005 is… as funny as I think it is now, at the time it was horrible. I had a terrible time. I hated it. At first it was funny, but it got progressively more and more horrible. And I don’t want to be that guy, because I know to the outside world it looked like really good fun, and at times it was, but at the same time, it was really difficult for me to deal with for quite a while afterwards. I think I really regretted it. I didn’t like to be associated with it, whereas now I think it’s quite funny, and I’m glad I did it.

It was just the right amount of stupid and the right amount of whatever. We did it until it wasn’t fun and then we stopped doing it, and that’s how you should look at things. Especially when you’re young, you shouldn’t be worrying about your career and where you’re going to be in 10 years.

As told to Stuart Stubbs, whilst laughing