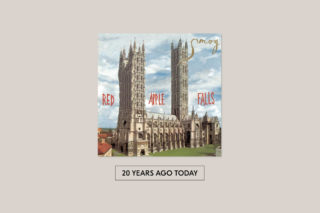 Now that Bill Callahan’s discography is fourteen albums deep, the stylistic lurches that pepper it are easier to parse: consecutive records tend to mine a certain aesthetic – be it lo-fi bedroom cassette confessionals, sparsely expressive melancholia or richly bucolic productions – and then, when apparently exhausted or satisfied, Callahan will move on, taking his wry-smiling, sad-sighing, elegantly restrained storytelling with him to another canvas.

Accordingly, twenty years on, ‘Red Apple Falls’ looks more like the result of Callahan’s first lurch than the blip it initially resembled: whereas the four albums that pre-date it were swathed in tape hiss and detuned electric guitar, with Callahan’s voice an often-unintelligible afterthought under the pawn-shop portastudio crackle, ‘Red Apple Falls’ (and the three that follow) introduced a calmer, quieter mood, emphasising Callahan’s lyrics and softening his accompaniments. It also set the template – detached, pensive, minimal, oblique, ironic – by which Callahan would become best recognised, and upon which all of his subsequent lurches seem based. Indeed, from that angle, ‘Red Apple Falls’ now assumes a pivotal role in one of American alternative music’s most impressive bodies of work.

It also, helpfully, contains at least three unassailably brilliant pieces of songwriting that each establish a different aspect of what is now Callahan’s trademark. The first is the fucked-up country song ‘I Was A Stranger’, all sweet pedal-steel guitar and lilting bar-room bonhomie that serves to cloak deeply unsettling lyrics like Greeks in a Trojan horse (“And why do you women in this town let me look at you so bold? / You should’ve seen what I was in the last town / I was worse than a stranger / I was well known”); the second is ‘To Be Of Use’, the raw soliloquy-like paen to personal sublimation that revels in both its perfectly economical lyrics and the acres of musical space surrounding them, a trope to which Callahan would keep on returning in future years so effectively.

And the final masterpiece is ‘Ex-Con’, as near to the indie-rock standard as Smog had hitherto strayed, but once again deceptively complex, this time imagining a man imagining that he’s a newly released felon who’s obsessively imagining planning a child abduction or a house robbery. That it does Inception levels of meta-characterisation while also prodding at the more universal discomfort of being a social misfit (“Out on the streets / I feel like a robot by the river / Looking for a drink”) and presenting an instant earworm is perhaps the best evidence here of Callahan’s ambitions.

Elsewhere, there are moments that still stand up (the closing ‘Finer Days’ now seems to be addressing the very stylistic lurch away from the margins that we’re witnessing: “granted passage into the finer days / how I got here I do not know”… “and all of my old friends want me to stay down with them”), but stronger collections of songs on both ‘Knock Knock’ and ‘A River Ain’t Too Much Love’ trump ‘Red Apple Falls’ when placed side by side. That’s not to its detriment though: like ‘Rubber Soul’, say, or even ‘Either/Or’, the joy here is witnessing the birth of something destined for greatness.

‘Red Apple Falls’ was ignored by the UK public, even more so than other contemporaneous American underground acts such as Yo La Tengo, Sleater-Kinney, Pavement and Elliott Smith, suggesting that despite the increasingly adventurous taste of post-Britpop record buyers in 1997, one still needed a name, a gimmick or a backstory to capture the public imagination as an indie act from the Land Of Grunge. With that in mind, it seems revisionist at best to ascribe much weight to its cathartic, caustic and restrained approach in terms of its inspiration on British music, even if one can now hear its direct influence in acts such as the xx and even, if you squint your ears, the Arctic Monkeys.

Instead, perhaps, ‘Red Apple Falls’ is a more accurate marker of its country of origin, and how US independent music continued to piece itself back together after the grunge explosion five years earlier, and better still a marker of its own creator’s progress: the first big step towards the serene, unmistakable and strange impressionist painter that Callahan would become.