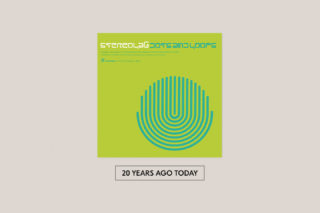 Given the good general progress that 1997 had made so far in moving away from standard-issue landfill retro pop, a rather seductive late-September album deeply indebted to music of the 1960s – all Bacharachian backing vocals and warm, parping brass sections – should represent something of a backwards step, regardless of its provenance. That it should come from a band as insurgent and disruptive as Stereolab, however, is even more disconcerting; after all, here was one of the groups for whom the genre “post-rock” was initially coined, a band that for the past five years had revelled in drone and buzz, intellectual socialist sloganeering and stern geometric dissonance. From them, now, anything remotely jaunty or retrospective would seem like an undoing.

And yet Stereolab’s fifth album ‘Dots And Loops’, released twenty years ago today, is both jaunty and retrospective, full of graceful melody (gasp!), swooping strings (shock!) and broadly conventional song structures (horror!), making for the sort of easy-access sonic whimsy that had brought success to far cruder bands than them in the preceding few years.

Of course, however, this being Stereolab, things are not as simple as they first appear. While ‘Dots And Loops’ remains the band’s most direct album, a (superficially, at least) sweetly fizzy hit of sophisticated Anglo-French sugar, it’s also perhaps their most complex, as experimental a record as it is accessible. Indeed, with twenty years hindsight, it now resembles a curious bridging piece between Britpop’s melodic fetishism and the cooler (both in terms of approach and cultural value) trip-hop and electronica that was drawing attention to record labels like Mo’ Wax and Grand Royal, seizing on both sides’ weaknesses for the hazily remembered past and then giving that a buff and sheen.

Yet paradoxically for an album so slathered in the scent of Serge Gainsbourg and Burt Bacharach, bygone exotica and kitsch 60s film soundtracks, Stereolab’s resulting cocktail is some of the most singular, forward-facing pop of the year. The glitching microbeats of ‘Diagonals’, all atmosphere and texture, could almost have been on ‘Supa Dupa Fly‘ had Missy Elliott chosen to sing blankly in French about existentialism, while ‘Miss Modular’’s breezy horn section, anchored by a loping cut-up breakbeat, suggests how DJ Shadow might’ve produced the Super Furries. Equally, both ‘Parsec’’s skittering allusions to jungle beneath tropicalia ba-ba-bas, and the 17-minute, five-section centrepiece ‘Refractions In The Plastic Pulse’ – a sort of variations on a theme by John Barry – create sonic jigsaws that are deliciously satisfying to solve. It’s as if Stereolab had heard Broadcast’s wilfully imperfected interpretation of 60s pop from earlier in the year and applied polyfilla and a Star Trek teleporter.

For all the adamant futurist postures struck at the time, though, it’s now more obvious that ‘Dots And Loops’ arrived at a turning point both for its writers and for British music in general, and by dint of that coincidental timing the album stands, inadvertently, as a quasi avatar for both shifts. For the Stereolab ultras, the album now looks like the first sign of weakness, the beginning of a mutation into bleep-bloop space-age aestheticism and away from the motorik urgency of their purest early days. Sure, all bands change – even those that insist they don’t – but Stereolab’s jettisoning of their trademark teutonic drive on ‘Dots And Loops’ now gives their whole discography a rather dramatic sense of “pre” and “post”. They weren’t the first band to make this sort of shift, but nonetheless it marks out ‘Dots And Loops’ as an album around which Stereolab’s others revolve.

Likewise, while the album wasn’t the first to make a concession towards pop aesthetics while emphasising cut-and-paste production and obscure sampling (‘Odelay’, for example, had gone double-platinum by this stage, while ‘Endtroducing…’ was still being lauded a year after its release), ‘Dots And Loops’’ timing was ideal: as Britpop dwindled, the album offered teenagers who had cut their teeth on Blur v Oasis, now a couple of years older and more curious, an accessible British-based shortcut into a world of collage, crate-digging and electronica beyond the walls of Beatles/Stones rock-music hegemony, not to mention the already sprawling and provocative back catalogue of Stereolab themselves.

But while these almost accidental qualities arm ‘Dots And Loop’s with a sort of significance beyond its own running time, the album wouldn’t continue to bear such scrutiny after two decades if it wasn’t also an intrinsically beguiling single piece of pop: as it is, though, few records in 1997 created as seductive and coherent a soundworld as ‘Dots And Loops’, seamlessly fluid over 70 minutes without ever becoming stultifying, which is why it’s such an enjoyable adventure still.

Indeed, twenty years on, it’s Dots And Loops’ possession of that most “Stereolab” of characteristics – of being unassumingly symbolic while, simultaneously, rather elegant and fundamentally urbane – that makes it perhaps the peak Stereolab experience. Other albums of theirs may be more loved or more played, but despite its apparently stylistic departures, despite its sonic softening, ‘Dots And Loops’ is the one where Stereolab’s signature is most indelible. Impressive for an album – like many of 1997’s best – that doesn’t sound like it should.