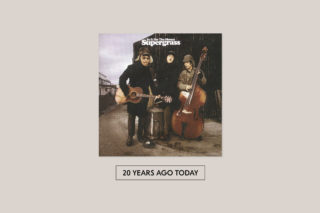 Whenever the question was posed in the heat of Britpop, “Blur or Oasis?”, the cannily evasive response, if picking a side wasn’t prudent, was always “Pulp”. Amid the factional bickering of the mid-90s, though, one unifying factor endured: everyone felt fond of Supergrass, regardless of the various cultural, geographical and class divides that seemed to polarise opinion of so many other bands. Indeed, an endearing mark of Supergrass’ own awareness of their place in British pop music is that later in their career they sold official button badges declaring themselves to be “everyone’s second favourite band”, revelling in their own lack of heft (or, depending on how you view it, their universality).

Even before that, though, part of what made Supergrass so likeable was that, at a time when many of their peers were making grand statements (either musically or in the pages of the weekly music press), they seemed to acknowledge the knockaround ridiculousness of being in a pop band while simultaneously writing quietly era-defining hit singles and, most importantly, appearing to enjoy themselves. There was no hand-wringing over suburban ennui or council-estate struggle for Supergrass, just (broadly) keenly observed teenage hijinks.

So when ‘In It For The Money’ arrived twenty years ago today, it was slightly bamboozling: a band known for their lightheartedness had returned with what, from a certain angle, appeared to be a rather serious second album – thoughtful, expansive and gently melancholic, with distinctly fewer barrelling japes. If ‘I Should Coco’ was giddy with youth, ‘In It For The Money’ was the sound of growing pains, and two months after Blur had re-emerged with ‘Beetlebum’, it seemed Supergrass were keen to ensure that Damon Albarn et al didn’t have the monopoly on Britpop bands testing out more mature territory in 1997.

That said, ‘In It For The Money’ doesn’t represent a personality transplant in the vein of ‘Blur’. There are still the blaring horn riffs, sticky key changes and pop-punk passages that made ‘I Should Coco’ so loveable, and thankfully so – after all, one of pop’s most tiresome tropes is a once-playful band suddenly requesting decorum. Alongside that existing template, though, the band added colour, calm and a gentle complexity, but crucially never in a splashy way. Indeed, perhaps the album’s finest characteristic is exactly that modesty: songs like ‘Cheapskate’, ‘Sun Hits The Sky’ and the raucously enduring ‘Richard III’ are marked progressions in Supergrass’ songwriting and playing – there’s an extra chord investigated here, a neat prog-influenced flourish there – but it’s never presented remotely triumphantly. It all makes for a record of progress rather than reboot, which rather magically combines all the fun of their melodic guitar pop with a more composed joy of witnessing a maturation.

And nowhere on ‘In It For The Money’ is that spirit best encapsulated than on the gloriously resigned ‘Late In The Day’. The stripped-back first verse, sly extra half-bar in the bridge, the back-to-back solos – it all adds up to a sense of expanded imagination, of a gravity without earnestness. And then, as if to remind everyone that despite the solemnity this is still Supergrass, the attendant video – initially a piss-take of Oasis’ ‘Wonderwall’ promo that descends into footage of the band larking about on pogo sticks – dodges any accusations of pomposity quite gleefully.

Nonetheless, it’s clear from ‘In It For The Money’ that three years being thumbs-up cheeky-chappy Supergrass was taking its toll, and lyrically, escape was on the brain: “Here I see a time to go and leave it all behind,” runs the album’s opening overture. The very next song sees Gaz Coombes yelling to himself, “I know you wanna try and get away, but it’s the hardest thing you’ll ever know”, and ‘It’s Not Me’ confesses that, “as everyone listened my head turned away”.

But again, around the album’s pleas for sobriety and release there’s a charming stoicism: the album’s final track (if you discount Danny Goffey’s let-Ringo-have-a-go coda) has Coombes acknowledge that while “sometimes, clouds will come over”, “one day we’ll feel a lot better”. And they would, too – Supergrass’ next two albums were far similar in tone to their debut, ‘In It For The Money’ apparently allowing the band to get something more nagging out of their system. Sometimes, though, those moments of catharsis make for a band’s best work, especially when introspection is done as inclusively as this.