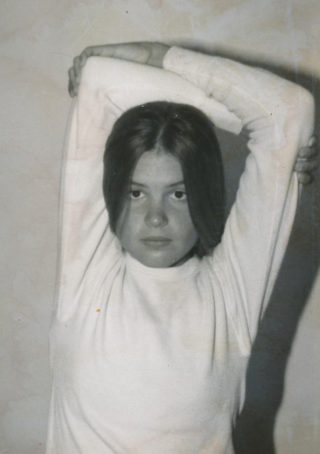 Right at the beginning of 16 I got really into photography and was taking photos of myself and developing them, like this one. I don’t know where the fuck I got that pose from.

I grew up in Vero Beach, Florida. It was a very small town, right on the beach. Really super boring. Nothing for kids to do. It’s kinda like a retirement community, like most cities in Florida are. We had to make up our own fun so all of us skateboarded and started bands. I was really into art – I was obsessed with it, taking all art classes between skateboarding and playing music. There was a trailer at school with a darkroom in it and the teacher ended up giving me the key so I could be in there all the time. I loved it so much because I was alone in there and I could make things all day – there’s something very exciting about taking a photograph and processing the film yourself.

I was not a good skateboarder, but I loved it. It was the culture from when I was 7 or 8. It was what got me into everything. Music was involved and art was involved. I loved the artwork on decks and I loved all the punk rock music that went with the imagery. I skated just to hang out and then at one point we all decided to form our own band, at around 14. By the time I was 16 I’d played lots of shows and done tours during Spring Break at summertime. I was ready at 16 – I wanted out of Florida and knew what I was going to do. We’d play house shows and skate parks and rent a building just to put a show on.

Despite all of that, I was not an outgoing kid in any way. I was insanely shy and it took me a while. I don’t remember the day when performing stopped being terrifying, but I remember that right from the beginning I loved it and was almost addicted to the feeling of being that afraid. At my first shows I’d hide behind a post or an amp. And then, gradually, I built up to standing in the middle of the stage. And then looking at people, which was absolutely insane. And then moving.

I didn’t have a lot of friend when I was kid because I liked being on my own. In high school I had one friend, or two – the drummer in my band and his brother. My obsessions where just so exact that the things that I liked, other people didn’t like. All the normal high school stuff, I just didn’t do it. I was very studious because my plan was to get out of there – to get into a college that was far, far away and leave Florida. It feels like most of my childhood was spent sat in my room writing and drawing.

Jamie [Hince] always tells me this story – he’s like, when I first met you (and this is in England when I was 18) you never spoke a word. All you did was laugh at everything I said. That’s basically what I was like. I loved being around people but I didn’t speak. I can totally remember that time that Jamie is talking about – I remember thinking he was the coolest person I’d ever met in my life, and he was hysterical, and just so weird. I don’t know why he put up with me because I was mute, but he’d talk to me about music and bands. I really looked up to him and he encouraged me to write songs properly and play the guitar. He stuck with me because of the transformation from how I was to what happened when I got on stage. Eventually I started talking and now I never shut the fuck up.

I have this really distinct memory from when I was a little younger than 16, when I really liked Green Day, when Green Day played to 300 people. On a really rare occasion, one of my parents drove me to their show in Orlando and for some reason or another they didn’t show up again until two hours after the show. And Green Day sat in the parking lot afterwards and watched me. They were like, ‘we’re not leaving you in this parking lot, no way; we’re going to sit here until your parents come.’ I’ll always think that that’s the coolest thing ever, that they did that for me. Because I would do that in a heartbeat for someone now. They played Nashville a couple of years ago and afterwards we were playing pool and I told them that story and they couldn’t believe how cool they were back then.