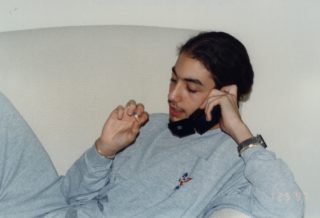 The Strokes guitarist remembers being 16 – a year of house phones and Mr. Show with Bob and David

First of all, in this photo it’s not a cell phone, it’s a house phone. I’m serious. I didn’t have a cell phone until I was 23. I loved gadgets. I’d change my answering machine message every two weeks. I loved stuff like that. It was the coolest phone.

This photo was January 25th 1997. I was almost 17, but still 16 here. I had my friend next to me – we were probably getting stoned. In fact, I know we were getting stoned. I love how my cigarette is almost down to the butt, too. I’m wearing pyjamas. I think my dad [Albert Hammond] had come back from a trip and those are the Virgin Atlantic pyjamas he got. I liked aeroplane stuff at that time, I guess. That was a weird time. I was figuring myself out then. By the time I was 17 or 18 I felt like I had my look going on.

We were probably watching Mr. Show with Bob and David. It’s a comedy show in America. It was a cult TV show on HBO that was these amazing sketches. When you’re that age you find stuff like that because it’s like having a passcode to meeting people. They get your joke or they’ve heard of it – you feel like you’ve found someone who’s cool.

At this time I was still at home, in Los Angeles. I was dreaming about wanting to write a script or make a movie, play music or be in a band. It was the beginning of falling in love with that stuff. Talking Heads. Velvet Underground. Beethoven. I was probably 17 or 18, but I got into a big crush on him. Then movies by David Lynch. When I saw Blue Velvet for the first time I just had no words… Ace Ventura. Pulp Fiction. Oh, The Doors’ ‘Greatest Hits’ CD. I fell in love with Buddy Holly and Roy Orbison – that got me wanting to sing and play guitar. Then I saw The Beatles and saw that you could do it in a group and I was like ‘That’s for me’.

At 16, I was writing the worst songs. Anything you love, you start doing terribly. I did some cool stuff on a four track that I’d found in the basement or the attic that my dad didn’t use. A little Tascam. It was hard because I was just, like, in a different headspace and I’d fallen in love with music and I felt like it was my own thing. In my house it was almost hard for it to be my own thing, though, because I share a name with my dad – he did that. It was always like… I never, tried to separate it in my head. I think that’s also why I wanted to leave so bad.

I fell in love with singing, writing songs and playing guitar but going from not knowing any of it to actually doing it is a big belief. I’m impressed with my younger self for being so ‘go for it’. I was not shy. I was definitely outgoing.

I’d met Julian [Casablancas] a few years earlier [studying in Switzerland] – he was just like an older brother. We’d play video games because we were the only Americans there. You bond because you have something to bond over. Sometimes you meet people and you have an energy with them – it’s just good. We did not stay in touch. It was all just random acts of life that connected us the moment I moved to New York. There is a series of events when I was 18, that I don’t know if I manifested it, but so many things happened to me that if you wrote them in a movie you’d think that they were fake.

Would I give my 16-year-old self advice? Fuck yeah! I don’t know how to say whether he’d believe me. I would have liked to have practised more and had a little more focus. I would say to myself it’ll pay off even more later. I wish I could tell myself to try everything once, to open that door – because I think that’s amazing – but to not get hooked on anything and waste life. I don’t think I’d believe myself at all. I don’t think I would have listened. How can you tell someone with a blind ambition that information? It might change their blind ambition. It might bring too much reality in that it goes away. I guess you either figure things out for yourself, or you don’t.

As told to Greg Cochrane