In 2002 I was at Wales High School in Rotherham, and what I remember from being 16 is that it was the first year that people started to fancy me. And that changed my life. Because I’d consistently been everyone’s funny friend – like, we had last-dance etiquette, where if someone’s disco was coming up for their birthday, at school people would be asking each other for the last dance. I’d had a lifetime of not being asked, and it’d be to ‘Flying Without Wings’ by Westlife, or something, so my thing was that I’d stand by my best friend who boys fancied her whole life, and she’d be having her dance and I’d be head-banging. No wonder no one asked me out. Ever.

But at 15/16 I naturally lost a load of weight and I started singing (I learnt to sing by singing along to the Alien Ant Farm album, doing a third above that guy, because that’s my exact range) so the monster was created then, when people started saying I could sing and that I was pretty. It was the beginning of the end of my life, really [laughs], because it bore my addiction to compliments.

I was in an am-dram musical of Seven Brides for Seven Brothers, playing the youngest bride, and when I look at it now, that was all these adults doing am-dram, and I was just a kid, essentially, around all this flirting. It was weird. I was still wearing baggy jeans and a dog collar – I was an emo before emo was a thing – but via that am-dram I remember going shopping with my mum and wanting a new pair of jeans that weren’t baggy, and that was a real loss of innocence, because I weighed up being sexually attractive versus being cool and myself. And I went to a rehearsal – with, by the way, all these adults who were over 20 – and I turned up in these tighter jeans and it was like Pretty Woman. And I was like, ‘Woah!’. It’s gross now, when you think about it, but in the moment, for all of my teens all of my friends had had boyfriends and were snogging, and I’d been terrified, constantly thinking what is wrong with me that I’m not like them. And I vividly remember thinking, right, this feels really good, and I feel right and correct. And now, when I do all of these Me Too music podcasts and panels and write about it, I’m still realising now that the sexualisation of me as a teen felt like that’s what I was there for – it made sense because of society. But that never should be what you’re aiming for – and the least interesting thing about me is what I look like. Because that’s what’s been taught to young women, that’s why men have steamrollered us for years. If you had brains, you were a loser, and that’s where it starts. 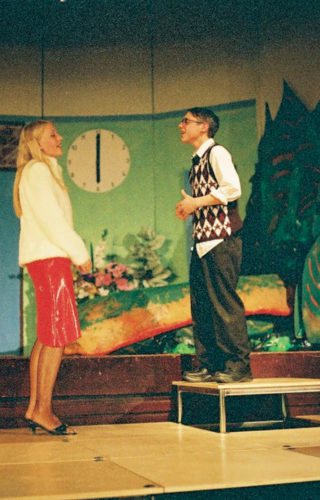 In those formative years, I was so weird, and my imagination was mental, and the second I could just be accepted because my arse was nice, I was like, brilliant, that’s loads easier. Which is sad, because I wonder how many people look back on that time and think, shit, that wasn’t ok. But it was rewarded then – I started to get the main part in everything. Because it’s not just your friends, it’s the teachers who suddenly let you be the lead because you’re thin enough, or whatever. And that shaped my life for many years then.

So I also got the part of Audrey in Little Shop of Horrors [pictured], which also starred the actor Ryan Sampson, who’s in Plebs and loads of other stuff now – it was an all-star cast. And it was also around then that we started to sneak into the sixth formers’ 18th birthday parties, which were all held at the rugby club. That was a coming-of-age thing – the first time I put on a short skirt, the first time I put makeup on. I was such a late bloomer, but I was going with my friends who’d all had sex and their boyfriends were driving us there. I was so nervous going to those parties I’d have five shits before I’d go. I’d then drink a couple of Blue WKDs and snog someone.

My other hobby was playing cricket. And this is a direct link, because around 16 I stopped playing. Because we’d play with a wind ball, but at 16 you start playing with a proper cricket ball, and I remember batting, and that fucking ball coming at me, and me thinking that it might hit my face, which was now pretty. And I quit. How grim is that! I feel so sad for me because all of the things that were genuinely joyful in my life just got superseded by being fancied.