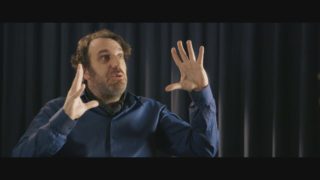 Another of his deconstructions – and probably the most complete yet

For the last twenty years Canadian virtuoso pianist and not bad rapper Chilly Gonzales has been trolling music fans and concert goers. It comes from a place of great intellect and unquestionable talent (especially in his piano playing, which he’s been doing since the age of 3), and it fucks some people off, although not as many you’d think – ‘Gonzo’ (or Jason Charles Beck) is a self-confessed megalomaniac, but a loveable one who is continually deconstructing himself and his multiple personalities, openly inviting us to hate him as much as we admire him. The perfectly titled Shut Up and Play the Piano is just another one of these deconstructions – the most complete yet – as egotistical as all life-charting music docs are, comprising the artist’s video archive of home recordings, official concert footage and new interviews with Chilly and lifelong collaborators and friends including Feist and Peaches.

Gonzo is still hammering home the same question he has for years: ‘Who is Chilly Gonzales?’ – a thought he’s insisted we consider so much that it’s clear by now that really he’s asking himself. Shut Up and Play the Piano starts to answer that question, or at least who Jason Charles Beck is, and why he felt compelled to reinvent himself as a pompous, confrontation raconteur who so finely straddles the opposing worlds of art and entertainment.

Gonzo’s range of skills are laid out in the opening montage made up of many performances of his rap track ‘Take Me To Broadway’, pulling in clips of thrashing outros and quiet lounge renditions. Equally as stirring and triumphant is the footage of him performing ‘Beans’ with a giant orchestra. But elsewhere there’s the story of his sibling rivalry with is musician brother (film composer Christophe Beck) and – a real highlight – the retelling of his time spend on the Berlin art underground with Peaches in the late 1990s, complimented here with unseen footage of the two Canadians discovering rap and performing art punk in basement venues.

Ultimately, Gonzo needed to immerse himself so fully in punk to realise that he should shut up (or at least tone it down) and play the piano, giving us the musician we have now. The film tells the story in a fittingly honest, wry and gifted way.