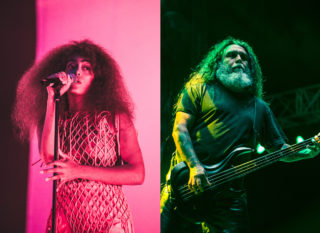 God bless Primavera and its sun and its beach and the young entrepreneurs outside who use illegally selling “sexy” street beers as a front to illegally sell illegal drugs (they keep those beers in the sewer to keep them cool – you should know that). That’s not what it’s really about, though – Primavera Sound is the only festival in the world able to book Solange and Slayer not just on the same bill over the same weekend, but on the same stage, on the same night, one after the other. Here’s how their performances from last night squared up. They were not the same.

Ten minutes later than planned, Solange sends her 8-piece soul band out to stall her prayer bow hello a little longer. Hey, it’s just ten minutes – no big deal, even if Primavera is an unusually tight ship on the scheduling. The brass section rasp and the cymbals shimmer and ‘Rise’ sighs across the site. Someone yawns and it sets off everyone in the incredibly large crowd, but, y’know, in a good way.

Slayer are bang on time. They do not bow. Rasping brass isn’t their warm-up palette of choice either – it’s that trash guitar chug that is completely ridiculous, of course, but has given us almost every incarnation of heavy rock since, especially grunge. Maybe they start with ‘Implode’, or ‘Bitter Peace’, or ‘Death’s Head’, or ‘Tickled By A Serpent’ – it doesn’t really matter, but it’s FAST. Someone yawns and is applauded for their irony.

Solange performs under a big round white circle (a moon? a Rusk?) with all the lights set to red, until 40 minutes in when they go blue. Her band (who really are incredibly tight, as you’d expect) all wear red.

Slayer have no idea that colour really exists. They wear black – naturally – and perform in front of a backdrop that looks like the top half of Amy Winehouse’s face crying black tears. Pretty offensive, guys, or it would have been if it wasn’t in fact a picture of top half of Jesus Christ’s face crying black tears; the cover of their ‘Repentless’ LP. Fine ­– continue. 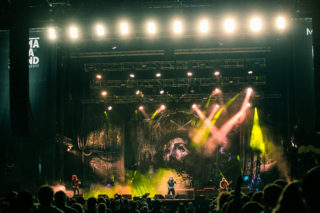 Solange’s show is ALL about style. This is a good and bad thing. The choreography (of which there is a lot), I can tell you right now, is completely fucking awful. It’s not a popular criticism at the festival, but the two-bit contemporary dance moves amount to the band shuffling left and right in unison (a move Bruno Mars would be tired of), Solange standing square and pencil straight and whipping her hair back (a poised bend and snap), and her backing singers moving their hands like automatons. It feigns minimalism and Michael-Clarke-at-the-Barbican ‘culture’ with a capital C, and quickly detracts from Solange’s vocal, which is flawless.

Still, props to Solange for giving something different a go (last night’s performance was a massive U-turn from her 2013 show at Primavera, which was a standard band setup, and kinda dull on the small Pitchfork stage), which can’t be said for Slayer whose big planned moment comes in the form of the Amy Winehouse/Jesus face dropping down and revealing the Slayer logo. Devil horns seemed to be the appropriate response to this bit of WWF theatre.

Solange’s is huge, and the most excitable of the evening. On the barrier fans are fixated and only just stop short of reaching forward for their modern heroine, in the way people do at arena pop shows. It’s the most diverse crowd, also, which is the big triumph of the whole night: a very welcome (and very noticeable) shift in Primavera’s clientele, from de facto white dude with beards to women and men of all races and orientations, is clearly down to Solange being here, and Frank Ocean near being here.

Slayer pull a crowd too. The thing is, they never really go off. Where’s the steam rising from the pit, I’m still thinking after 30 minutes. And then, when a circle finally does get going, really it’s just a bunch of people skipping around together. I’m not close enough to hear if they’re giggling or not, but I’m 90% sure they are.

In their own words

Both of these sets – with their own single speed settings that eventually take their toll (the sleepy, smooth, M&S-ness of Solange and the daft bludgeon of Slayer) – can really be surmised in what each of the performers said on mic.

Solange: “We’ve got Starchild on keytar.”

Slayer: “Hope you like what we do. It’s a little different to what you’ve been listening to today. This is ‘Dead Skin Mask’.

Solange nipped off and on again for a brilliant encore of ‘Don’t Touch My Hair’.

Slayer were cut short by one song. Apparently someone had come on late earlier.