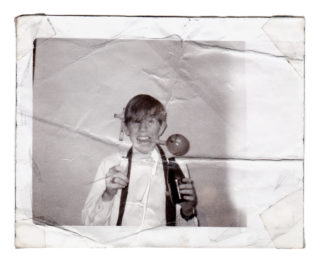 Thurston Moore: I’ve always held on to this photo. We took it at a friend’s house while we were clowning around with an instamatic camera. I remember thinking what could be the most demented thing I could do? I know, I’ll be sniffing glue and playing rock ‘n’ roll! So, there I am, with glue in one hand and a maraca in the other. I particularly like the Crucifix on the wall. It’s kind of askew and gives the thing an extra sense of derangement. It was like I was trying to find every symbol of vice in this kid’s bedroom.

It was our last year of Catholic school. I remember being really excited to be finally graduating into public life. The year after we’d be in a school that wasn’t so religiously orientated and we’d finally be free and liberated. I seem to recall felling more than ready for that at the time.

I think I was happy at high school, but I was definitely a geek. I was like this tall, skinny, freckled faced kid. I mean, sometimes I was a bit of the class clown, but I didn’t have an imperious or confrontational nature at all. So I wasn’t involved in sports because it was too aggressive. Not that I’m anti-sports; I remember trying out for the basketball team. I was tall, so they liked me until they realised that I was completely uncoordinated.

I also played flute in the school band, and I was pretty good at it. Well, until I had a concert and they asked me to wear a bow tie. I just quit; much to the chagrin of the band master who was telling me I was the best. I’ve always felt a bit bad about that, because I think I really bummed him out. But there was no way I was going to wear that bow tie. I’ve always taken his words to heart, though. He was the first person who told me that I had some musicality and I’ve always held on to that.

It all sort of changed when I hit 16. I started seeing things that I wanted to get involved with, especially the stranger, more marginalised end of rock ‘n’ roll. Bethel, where I grew up, is a small place, and I had something of a small-town life, but it’s an hour from Manhattan. That meant that I was always exposed to images of things that interested me; like the New York Dolls and Kiss. I remember buying the New York Doll’s album and realising that I was probably the only person in my school who was into it. If I’d shown it to anyone they’d think I was kind of funny. It was around that age that I really started getting these signals that something cool was happening in New York. By the age of 18 I was visiting the city regularly and had really started seeing things, and by the time I was 19 I’d moved there.

So, in a way, the summer we took this photo was one of discovery for me. It’s when I first started to come across things that resonate with me to this day. I first found the records that were significant for me; like the first Stooges album, Can and Captain Beefheart. Suddenly rock ’n’ roll became this big draw in my life. I was starting to grow out of comic books and records were the only other thing that interested me. I had an older brother who was bringing records to the house, things like ‘Abbey Road’ and Jefferson Airplane, but I wanted to buy my own. The first things I bought were from his era: Iron Butterfly and the Rolling Stones, but there has always been something about weirder music that appeals to me.

The reason I probably bought those records was because they were so inexpensive. The only real money I could get was from mowing lawns so I only ever had pocket change and that meant that I’d have to get what I could find in the cheap bins. I mean, these were the records that no one was buying and most of them were really terrible. But in amongst all the dross there was some avant-garde curiosities, even though I didn’t know what they were when I bought them. I found things like Amon Düül, Can and certainly the first couple of Stooges records in bargain bins. I have this theory that a lot of the people who got into punk rock only got into it due to the economy. The records we could afford were the records that were cheap, and those were the records that really informed us because the cheap records are mostly the weird records.

Back then, though, all I knew was that I wanted to freak out. This photo really pronounces that desire – with a tube of airplane model glue in one hand a maraca in the other.

As told to Dominic Haley 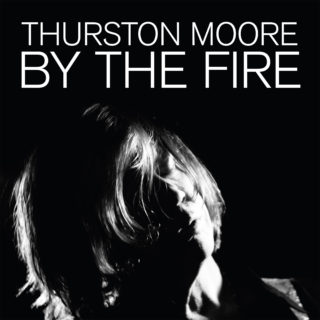 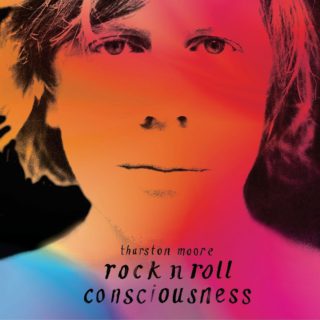