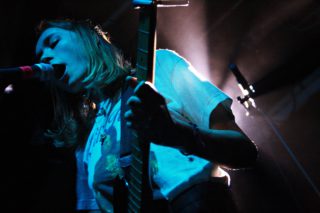 As their debut London headline gig goes to show

On the surface, Sorry fill the expectations of what anyone might expect from your ordinary North London indie outfit. Slightly surly faces, baggy trousers and ill-fitting jackets. But for a band whose allegiances span both bedroom grunge and hip-hop, they’ve already shown that any tag as a archetypal emerging ‘guitar band’ has an ill fit.

The recent release of their visual ‘home’ mixtape and bouts touring with Childhood have landed them here, their first headline show before a packed out venue of people eager to support – or maybe just suss out. In the room, there’s a there’s a unique cloud of both uncertainty and expectation – probably driven by the fact they’re both freshly signed to Domino, and have only recently put out their proper debut single.

Any concerns that Sorry may not prepared to meet that hype are erased from the outset. It begins with a ruthless barrage of distortion that’s mercilessly loud. They look, and sound (in parts), like the angsty amphetamine-fuelled alter ego of Wolf Alice. Frontwoman and focal point Asha Lorenz remains, throughout, rooted to the spot – stoney-faced and snarling.

It’s a set list that joins cuts from that recent mixtape along the airing of some brand new music. Everything feels calculated – in the professional sense, not in a cynical way. And the pace is generally relentless, Lorenz and the band barely pausing in the breaks between songs.

By the time they reach ‘Lies’ and ‘Wished’ – the band’s only two formally released recordings – it’s easy to make the distinction from average bystanders to Sorry’s soon to be diehard disciples. ‘Wished’s’ brooding chorus, “Take me home / Wash me up / Leave me alone” gets sung clearly back at them.

It all comes to a heady climax – a fusion of raspy bass and ear-splitting guitar feedback. So, if there’s anything learned from Sorry’s maiden headline show it’s that they may be a band with a DIY work ethic based in a bedroom, but those are surroundings they’re soon to outgrow.