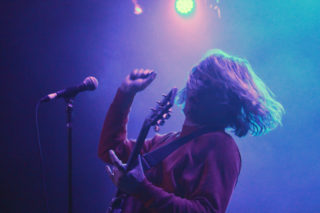 If sludgy, doom-tinged riffs and growling feedback are more your thing

While the crowd at the Woods Stage are having their minds infinitely expanded by the untouchable genius and erudite wisdom of Father John Misty, the rest of us with brains not capable of understanding the complexities of his MOR indie-folk were left watching Ty Segall open up a sonic portal on the Garden Stage.

Segall’s output is notoriously prolific and can be tricky to keep up with, plus he almost seems to get restless stylistically too, in recent years playing sit down acoustic shows in support of ‘Sleeper’ and more recently sporting masks and wreaking havoc with his band The Muggers.

So he arrives at a point in his career in which predicting which version of him you’ll encounter becomes an impossibility. Tonight, however, he seems utterly comfortable in his current incarnation, with a band that play with all the looseness of a jam band simply having fun in their practice space but the flush tightness of a group that teem with a natural dynamic, talent and craft.

Their sludgy, doom-tinged riffs that open the night set the tone for an evening that could be tagged loosely as Black Sabbath meets Crazy Horse. Even when he enters into older territory and plays the usually frantic ‘Girlfriend’, even that is slowed and toned down, allowing for sustained notes, unfurling drones and hazy atmospheres that are truly immersive – creating a thick, engulfing maelstrom.

The pacing and placing of the set proves to be a wonder, with short sharp bursts of frenzied guitar blasts echoing through the night as a rhythm section hammers behind him with engine-like precision. These bursts then give way to elongated breakdowns that create a natural fluidity to the set whilst also forging a space for the group play intricate, interweaving parts that, whilst certainly a clear indication of the band’s talents, never feel like a superfluous exercise or an indulgent mess.

It all contributes to a headline set that never seems to dip or lose momentum, slowly building and rising into peak after peak until they leave the stage in exactly the same way they came on it, with a trail of growling guitar feedback. 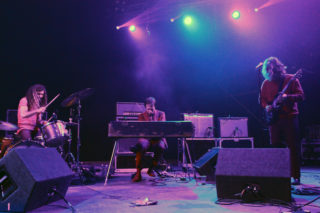 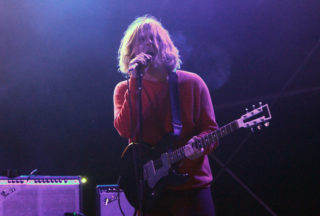