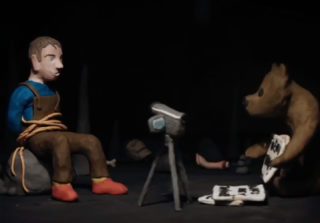 Does Mac DeMarco shit in the woods?

In February, End of the Road festival announced their initial lineup with a pretty special claymation video by Joseph Brett.

It ended with a putty version of Mac DeMarco – who’s only UK festival date this year is as an EOTR headliner – being clawed by a bear and dragged off into the woods.

That was that, it seemed – dead Mac – until now, and a follow-up short that the Canadian has voiced himself.

Watch it below, and pick up this month’s Loud And Quiet from Saturday for a special guide to this year’s festival, blabbing on about all the special events going on at Larmer Tree Gardens from Aug 31 until Sept 3. There’s the music, of course, but also a comedy lineup, films, secret events, artists in discussion and a new hookup with BBC Radio 3 experimental show The Late Junction.