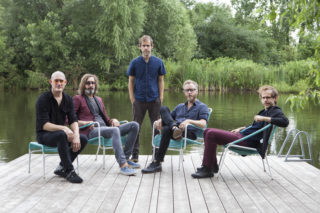 These days, festivals are expected to behave like train services. The schedules are published well in advance, performers should start and finish on time and, if you don’t want to slum it with the average punter, there’s always First Class. Sure, the injection of more collaborations and unannounced performances have kept some spontaneity – but generally they’re like tube trains, if you miss it one, the same one will come along in a few minutes.

Sounds From A Safe Harbour, taking place across the city of Cork this weekend (14-17 September), is different. By definition it’s a festival – a collection of performances, talks and installations – but there’s a spirit of freedom which reigns over the whole thing.

The event, which has only taken place once before, in 2015, is curated by festival director and former SEO of Cork Opera House Mary Hickson, alongside Bryce and Aaron Dessner from The National, actor Cillian Murphy and playwright Enda Walsh.

The programme, which merges art, film, music, literature and talks takes place in some of The Leeside in Cork’s most beautiful spaces including The Opera House, St. Luke’s and the legendary Cyprus Avenue.

“The audience may be the first to see something brand new. That will happen. We just don’t know what they are and where we’re going to show them,” Hickson told The Irish Times recently.

These, we think, will be some of the highlights:

What: The Secret Listening Club
Where: Rearden’s
When: Saturday 16 September, 12-5pm
What: An afternoon of music set around “five hours, four floors and seven experiences” – this is part of the programme that’s deliberately kept TBC. A secret set of artists will play, but those in attendance will only find out once they get there and roam between the different levels of the venue.

What: Guilt trip, an exhibition by Ragnar Kjartansson
Where: Crawford Gallery
When: Thursday 14 – Monday 18 September
What: Only taking place for the duration of the festival, the Icelandic artist presents a short film in surround sound. The atmospheric piece centres around a mysterious figure trudging across a frozen landscape firing a gun.

What: Cillian Murphy in conversation with Aaron and Bryce Dessner
Where: Crane Lane Theatre
When: Saturday 16 September, 2pm
What: Corksman Cillian Murphy is back in his home city for the weekend – he’ll take part in a number of events, including this, a talk alongside his fellow festival curators, Aaron and Bryce Dessner from The National. Murphy will also introduce the documentary ‘The Possibilities Are Endless’ at Triskel Christchurch later that day.

What: Lisa Hannigan, Bon Iver and The National
Where: Opera House
When: Thursday (Lisa Hannigan), Friday (Bon Iver) and Saturday (The National)
What: The ‘headliners’ as such. The programme revolves around the Cork Opera House and each evening will be completed by a gig by some of the most notable names taking part. In keeping with the festival’s spirit of collaboration and exploration, don’t expect these to be the normal run-of-the-mill performances.

What: Heineken free music trail
Where: Various venues throughout the city
When: 15-17 September
What: Curated by Irish new music site Nialler9 – free pop-up shows from artists will take across the city all weekend. Aaron Dessner, Justin Vernon, Mouse on Mars and a host of others, including lots of brand new artists, will play.

For more information on Sounds From A Safe Harbour visit their site.
Photo: Graham MacIndoe

Sounds From A Safe Harbour