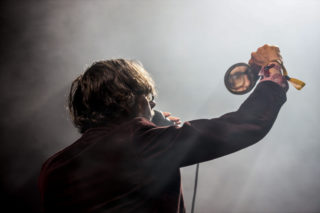 About halfway through his set at Primavera this evening, Jarvis Cocker glances up into the sky for a moment like he’s recovering a message from the heavens. After a brief pause, he puts the mic close to his lips and mutters in his unmistakable Sheffield drone – “We’re all children of the echo, born somewhere between kings cross and Morden.”

Cocker has always been nothing if not enigmatic. When in Pulp, he stood out from the rest of the pack by wrapping confessional and often uncomfortably candid sexual imagery and social commentary in a disarming charming and authentically working-class persona. With new act JARV-IS, he’s taking the same subversive approach but has replaced the more mundane subject matter with musings on the nature of existences, the cosmos and everything else really.

Tonight is Jarvis at his most Jarvis-y. Dressed in his distinctive crinkled corduroy suit and heavy-rimmed glasses, he barrels through a set of new and old songs that are both gleefully tuneful and weirdly left-field. New single ‘Must I Evolve’ is a stream-of-consciousness deliberation on the idea of personal, physical and metaphysical change with brief stop offs to talk about badgers and hot-pants. Another song seems to be a ten-minute thesis on the joys of house music rendered in glorious plonky synths and eerily violins. As each song speeds by, each is a riot of kitschy show-tune pop and random mystical observations, each weirder than the next. 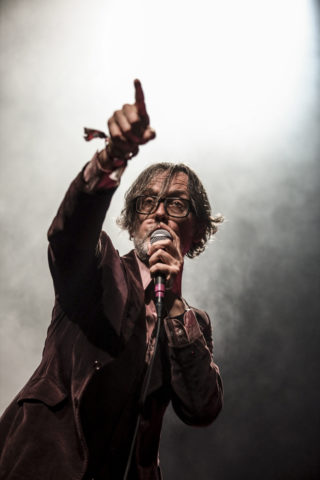 “Writing a song is like a magic trick,” he explains in typically cryptic fashion during an interlude leading up to a song about a London shop. “If you reveal a magic trick you’re kicked out of the magic circle. There’s always an element of truth, but I’m not telling you what it is.”

There’s always been an air of club singer around Cocker’s live show, and the singer’s asides and quips are as equally entertaining as the music. Like Sinatra channelling Vic Reeves, each song gets its own rambling and often nonsensical introduction and, as if to take the idea of being a generous performer to a ridiculously literal level, he reaches into his pockets for hard sweets that he tosses into the crowd. “Oh, I found a pack of badgers,” he says at one point, apparently genuinely surprised. Launching it into the crowd, he asks the receiver to share it around, as there are five sweets to packet.

A warped and reimagined version of ‘His N Hers’ is definitely the highlight. The first and second verse and chorus are all as you’d expect, and we make it through the start spoken word coda OK, but suddenly, it’s as if the universe begins speaking to Cocker again.

“I want to tell you what I’m really afraid of,” he says, falling to one knee. “I’m afraid of that dust that sticks to the floor, and you can’t pick it up, even with a Hoover.”

Then, he stands. “Now, I want to know what you’re afraid of” and like a flash he’s jumped down into the crowd. Alright, it looks like we’re doing an impromptu Jerry Springer.

His first victim is a Catalan lady, gamely hanging to the barrier for dear life. “What are you afraid of?” He asks softly.

“I suppose I’m afraid of getting old.”

“Well, that’s something we’re all afraid of,” fires back Cocker. “I mean, look at me.”

Then, he stalks across the crowd and homes in on a very excited looking older gentleman.

“What are you afraid of,” he asks.

The man looks at him quizzically.

The man still looks at him like a lost puppy.

“I can tell just by looking into your eyes what you’re afraid of,” says Cocker, effortlessly rescuing the bit. “You’re afraid of talking to men with glasses.”

He produces a yellow balloon and gives it to the man. “Here; This will protect you.”

The look of pure bafflement as this guy takes his balloon speaks for itself. Later, as the crowd sings along to the increasingly prescient ‘Running the World’, I’m struck by the realisation that maybe that guy was onto something. Maybe, it’s best not to try and understand the new and improved JARV-IS or its eccentric frontman. Perhaps the right way to go is to simply smile, nod along and let the bemusing, madcap brilliance wash right over you. 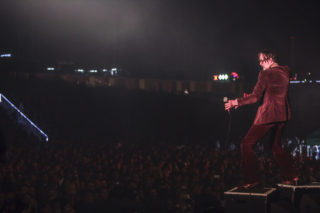 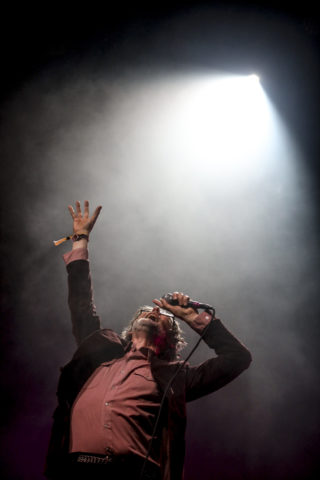