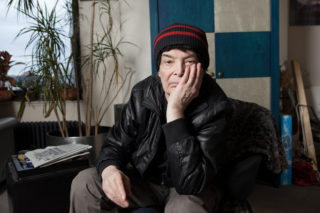 The Suicide legend does all the talking

Twenty years ago, Alan Vega stepped into a New York studio with Alex Chilton of Big Star and New Jersey musician Ben Vaughn and improvised an entire album over the course of two days. A couple of years later, the “band” that made ‘Cubist Blues’ played two shows of the material – one in New York, one in France – and promptly went their separate ways. Having slipped in and out of print, a curio even within the cult discographies of all three artists, Light In The Attic and Munster Records are reissuing ‘Cubist Blues’, along with recordings of both live shows, this month.

The recording from the 1996 show in Rennes is particularly revelatory, with Vega – then well into his fifties – having no recall of the original songs, and making up new, stream-of-consciousness lyrics for each number based on the titles on the setlist. So ‘Dream Baby Revisited’ becomes a valedictory barrelhouse piano romp and ‘Fat City’ an even more scathing indictment of an increasingly unrecognisable NYC – a subject which still rankles Vega today. And while ‘Freedom’ on record is an eerie anthem, Vega preaches it in concert like a shamanic Elvis impersonator:

“There are a lot of fucked up things, man… As long as you got this fuckin’ thing called freedom – to be free, man, it’s everything, it’s like good health. You’re fuckin’ blessed with this shit.”

Fast forward two decades, with Vega reminiscing about the work he did with Chilton and Vaughn from his New York home, and there are times when it feels like I’m talking to the ghost of the ghost rider. At 77 years old, and having undergone surgery following a heart attack and stroke in 2012, Vega does sadly sound his age. That said, while he may have lost some of his fire, his cutting Noo Yawk wit remains in tact, and his memories of two fleeting days in 1995 are as razor-sharp as they are heartfelt.

It sounds great. I was surprised by it, y’know, how intense it was. I had to understand how, like, I thought it was so commercial. But it’s not – it belongs somewhere else. I don’t know what it is, but it’s somewhere else. And it sounds great. It’s really a great record! I’m really proud of it right now – I could listen to it over and over again and be like “Holy shit!” I don’t know how I did it, but I did it! I really did it! I really hate to say it, I kinda wish it was shit, but I really amazed myself. I didn’t realise I’m as much a blues singer as I am. It’s like, I’ve been able to do a lot of sounds – crazy sounds with Suicide ­– but a blues singer is basically what I always was. And it’s great to hear.

He used to disappear all the time. He always disappeared. I got to know him a little bit, but that was Alex. He reminded me a little of Martin Rev, but he was Alex Chilton. And the funny thing is, as soon as you’d try to say something to him… Y’know, at the beginning of the first set, I said to him: “Y’know Alex, maybe we could do this another way…” – he gave me a look, and that was enough to say: “Shut the fuck up!” And I didn’t have to say another word. He didn’t say much, but when he said something, it was always right on! Alex was Alex, and he was great. He knew what the fuck he was doing.

Just being with him was great, and I feel terrible that he’s dead… but it was great knowing the guy. When I used to be at CBGBs, on the right side there was a garage, and I never knew that it was Alex [hanging out there] until about a few months later – “Oh that’s Alex Chilton! Holy shit! From the Box Tops!”

I was surprised to see the guy I eventually came to know as Alex at CBGBs; I never saw him at any Suicide shows outside New York, and I never thought he knew any of our music. And sure enough, I didn’t realise – he sat down in the lotus position to play music, and he did ‘Cubist Blues’, so he could do anything. Because Alex Chilton of course knew his shit.

“I actually heard a lot of Alex’s music for the first time since he died.”

I was really sad when he died, because he was really wonderful. I couldn’t believe it, I couldn’t believe he was dead. We did a show for him, we did two songs, ‘Rubber Room’ – I really love that song. To me, that was pure Alex. I’m glad I did it. When my wife and I left that show, and we were waiting for a cab right outside, and this one guy from the Deep South came up to me – I thought there was going to be a big fight or something, because I wasn’t getting a great reaction from the audience – he came to the entrance, and he said: “Man, this evening was so great, and that song you did, ‘Rubber Room’, was the best I ever heard Alex Chilton.” And that was enough, it was a great honour – a guy from the Deep South [saying that]. The reaction I got was as proud a feeling as I could ever get. It was a beautiful thing. I really wanted to do service to Alex Chilton, and I feel I did. God bless him.

“I nearly got into a fight over this thing…”

There’s a good memory I have of Alex – we did the show at the venue in Rennes. He didn’t [usually] say anything to us, but the one thing he said was: “Man, with all the time I’ve spent on the plane and the cab and the car, we could have been in Japan!” It’s true – we spent sixteen hours travelling, and we could have been in Japan! That’s all he said. That’s all he had to say! It’s so true.

“Guys, I can’t sing another song, because I feel as if my head is on fire…”

I knew ‘Cubist Blues’ was different – you can’t tell exactly what it was, but I knew it was different. It was almost country and western, but it’s something else. It’s Alex Chilton music; it’s Ben Vaughn music. That album was done in a day. And I swear to god, I’ll never forget the last moment. We were gonna do two songs, and that was gonna be it. We did twelve songs – the last one was ‘Dream Baby Dream’, and I said: “Guys, I can’t sing another song, because I feel as if my head is on fire, my brain is on fire.” I really felt it! I couldn’t do another song. I don’t know how we did it. Now I realise I really could have done more! I’ll do it myself – I just feel like singin’ the blues!

“I really feel like now, maybe it’s time for a real, real change.”
I’ve done several rockabilly songs – one was very sensational, and a big hit, the second one wasn’t as bit a hit. And I really want to go to rockabilly or blues. Suicide is a different thing in itself, and I love doing Suicide, but I love doing all kinds of things. I was told I could probably sing into a New York City garbage can and sing as good as anybody, but the blues – they ask me what I consider Suicide, and I say: “It’s New York City blues.” It always was, it always will be, and whatever I sing, it doesn’t matter.

“I get a lot of kids come by that want me to hear music.”

Occasionally I find something, but not very often. There are two guys who do really, really good shit, who cut a song for me. Two guys, believe it or not, like Suicide – one’s the drummer, one’s the keyboard and guitar player [note: I think he’s talking about Sonic Cathedral act The Vacant Lots]. They play in New York a lot, and they’re really incredible. They hang out here, and the lead singer’s got a gorgeous girlfriend. ARE Weapons was one thing a few years ago, and I have this band, and they really are good. I wish them well, I hope they’re gonna do something, especially the lead singer, because he’s a real artist – he paints, he does sculpture. The drummer’s great too! I love ‘em. They’re real sweethearts.

“People want to spend a lot of money on me!”

I mean, $100,000 to play Australia! $100,000 – can you believe that shit?! And Sweden – a lot of money, just for one night! A part of me wants to go and do it, and part of me wants to retire already. I mean, I became a sculptor, and I love sculpture, and now I’m painting again. So go figure. Who knows what I’m doing anymore. I’m retired anyhow, I don’t give a shit. But anything could happen.

I don’t even [feel like I] live there anymore. Everything has changed. The landscape has changed, the people have changed, there’s all these stupid yuppies and dogs and cats and people and shit. I have a wife, and a kid, and they’re both beautiful, and I mean, I don’t give a shit. There’s nothing you can do about it, man. It’s really nothing like my… my thing anymore, and it really upsets me. I’ve always had a place on 4th Street that I call home. I’ve found my little niche, but right now, I’m not part of the New York scene anymore.

I’m thinking of moving somewhere, but I don’t know where. It’s all the same shit to me. There’s nothing anymore. The streets used to be full of garbage, and I’d take some of that and bring it home with me to wherever I lived – I must have lived in about thirteen different places in New York, and I used to keep piles of shit in my house and use it for my sculptures. As it is now, the older people are dying out, right in front of me, and I can’t describe it anymore. I don’t belong anymore. I don’t belong anywhere anymore. Time for me to drop dead, I guess.

“There’s a book out about me now.”

It’s hard to read that shit because I did it! I mean, it’s not telling me anything I don’t know. [laughs] Who knows, maybe there’ll be stuff I’ll find out. There’s a guy doing a piece on me for his PHD. A PHD… for me! For christ’s sake, what will that get you?