A tour of her central London studio, fresh from receiving her MBE

Two days ago Anna Meredith was at Buckingham Palace collecting an MBE for services to music. “I didn’t get her maj,” she says, “but I got Will.” She shows me a photo on her phone of her speaking to the prince mid-ceremony; him standing on a small, for-Royals-only rug, her telling him how shit school was, and so she and her friends would barricade themselves in the music room to escape the verbal abuse and occasional hale of coins. “Well, look at you now,” said William, and shook Anna’s hand. “You’re told beforehand that your time is over when he shakes your hand,” she says. “That’s the sign that you need to leave.” Accordingly, she went to the pub and got pissed.

And now, in Anna’s studio in the basement of Somerset House, it perhaps feels like she was never there at all. In the long corridors of heavy doors that hide the creative spaces of countless audio and visual artists, where PJ Harvey constructed a glass-walled recording studio and invited the public to watch her record The Hope Six Demolition Project in 2015, there’s a sense that time both stands still and runs away from itself down here. Anna’s room does have an outside window, but a few feet in front of it is a brick wall that stretches up to the giant Georgian building’s cobbled quadrangle – home to an open-air cinema in the summer and a skate rink in the winter, both of which are as high in ornate beauty as they are low on 21st Century comfort, each of them as likely to cause piles as the other.

Pointing to her dying plants, Anna says that sunlight makes it through the gap for about ten minutes each day, but the continual late-night-cram-sesh feeling of this womb-like space seems to play to her strengths: few people are as prolific as Anna Meredith; even fewer are as continually creative.

Aside from her two experimental electronic pop albums (2016’s Varmints and the equally brilliant FIBS of late 2019) – all galloping brass builds, thwacked drums, and techno led by a clarinet – Anna has become a returning composer at the Proms, and sound-tracked the best film of last year (Eighth Grade) and Paul Rudd’s new Netflix series Living With Yourself. She’s composed an opera with YBA storyteller Philip Ridley, and mentored Goldie for a TV show about the practice of classical composing in 2009.

But she seems to approach each of her projects with the same conceptual commitment, regardless of how big-time they may be. On the fireplace in her studio she shows me a jewellery box that was part of a piece devised with Leeds University, where each student fitted an old box with a coloured light and a chord from an original composition by Anna. When the group opened their boxes in the sequence they were instructed to, they would perform Anna’s piece in full. Similarly, in 2017, she composed an interactive piece of music for the Zamboni that cleaned the ice on the Somerset House ice rink upstairs – a piece that a very low percentage of the skaters would have probably realised was forever evolving as the driver cruised the ice.

Eighth Grade director Bo Burnham calls Anna “a genius” with good reason, although her originality is best surmised by a note to herself scrawled on her whiteboard – NEVER STOP EXPLORING!!.

When you watch Anna’s music performed by a ginormous orchestra at the Royal Albert Hall on the BBC, it’s nuts to think that it all starts in this small subterranean room, stacked high with her own merch and “full of tat,” as she says. Talking me through the tat, at one point she gestures to a framed illustration of The Legend of Korra. “The boobs are bit much,” she says. “I think that’s a male artist. It’s bit too sexy, but fuck it. There’s a lot of stuff in here that I wouldn’t put up at home.” 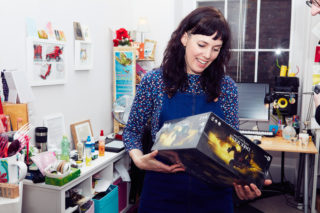 Y’know how sometimes one gets a bit swept up in Kickstarter, and you end up backing something that you have no interest in – well, this is Dark Souls the board game. Dark Souls is a really hard computer game that I’ve never played but used to sit next to my old boyfriend and offer helpful advice on, like, “smash that crate!” But I somehow saw this thing on Kickstarter, and it was REALLY expensive, and this was three or four of years ago, but look how intimidating it is! It’s got 15 dice! I’ve not even opened it, and then the other day an expansion pack has turned up. This is the year though; this is the year I play it. 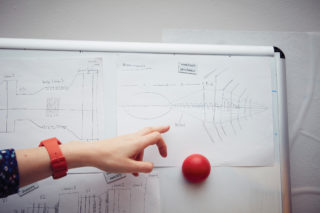 This is the map of FIBS – it’s how the album looks essentially. It’s how I write the songs to make sure the pacing makes sense. It’s like a mood board that makes sense to me, where different things happen. Getting the drama right and the builds right is always what I’m working on in my music. If you have a shape where you know that you’re trying to push to a B section, for example, then you have a bit of a map of how to get there. It’s really reassuring. It’s like an essay plan. I’ll often think, what’s the biggest moment, and I’ll write that first. 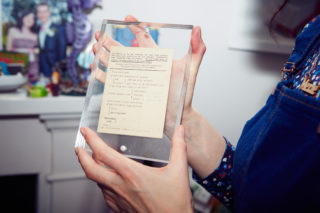 Last year I composed a piece for the Proms called ‘Five Telegrams’. One of the movements was about these things called field postcards. If you look at it, it’s a multiple choice thing, and in the First World War, if you wrote anything else on here to send home, it would be destroyed. So your choices were, ‘I am well’, ‘I am in hospital’, ‘I am being sent down to the base’, and so on, and soldiers would just send these back all the time because the postal service was so good in the First World War. So I set these words as vocal words for that Prom. I’ve seen loads of these because they were so commonplace, and I think most of them were people saying ‘I am well’ – they were the equivalent of the ‘landed safely’ text. 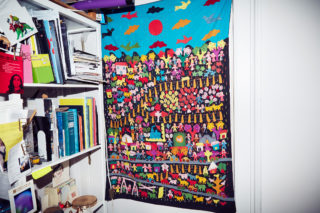 I did a British Council project in Chennai in India, and I bought this from a local craft stall because I thought it was just bonkers and amazing. Like, is it urban or is it rural?

I loved Chennai. People had told me the south of India was much more chilled but it was still quite an overwhelming experience with lovely people, great musicians, beautiful and heart-breaking sights, amazing food and palm-sweat inducing traffic. As a generally pretty anxious person I’m not as laid back about the zesty highs and lows of travelling as Id like to be. I can quite often ruin large quantities of time by bellowing, “but what’s the PLAN?!” at whoever will listen. 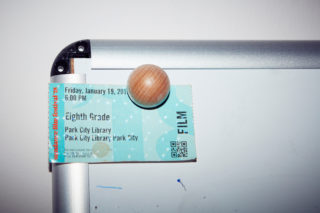 The very first time I saw Eighth Grade was at the premier at Sundance. Bo [Burnham, the director] was like, “I really want you to come up on stage afterward.” He introduced Elsie Fisher, who’s the amazing star of the film, and everyone goes crazy. And then the guy who plays the dad, and everyone screams and claps. And then he said, “And genius – total GENIUS – Anna Meredith!” and it was a mix of silence and confused half clapping. Like, who is this? But Sundance was fun – not very glamorous, because it’s so cold and people are just skidding around in the snow, and everyone had their own Uber driver. It’s just like a quaint little town with a disproportionate amount of cinemas, and then when I went to see the film it was the first time anyone had seen it. Everyone was worried – I was kind of nervous and then really chuffed, because the moment when my first song came in it was deafeningly loud. I was sat next to the sound editor and she leaned over and said, “we put you really high in the mix.” 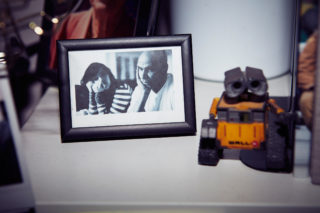 This is a photo of me and Goldie from a TV show called Classic Goldie [2009], where they wanted him to write a piece for the Proms. I think there was a sense of, ‘yeah, yeah, that’ll be fine, he writes music’, but writing a piece for an orchestra is not the same as writing something on a computer, because ultimately classical musicians need to see sheet music. He ended up drawing this beautiful graphic score of what he wanted, but we did then have to get my friend who’s a composer to spend a ton of time helping him interpret his ideas, mainly in Nandos, because Goldie has a Nando’s black card. We got on really well, although I think this picture was taken at a particularly stressful time. 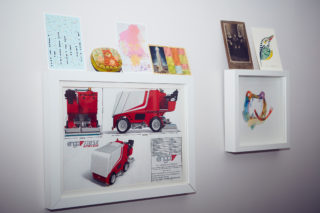 Printed spec of a Zamboni

This was really fun to do – I wrote this piece for the Zamboni that cleans the ice rink here at Somerset House. It was called Sarabande and was a piece that would play when the Zamboni came out, and the music was affected by the way the driver drove. So when they turned it would go faster or slower – things like that. There was a phone stuck to the back of it sending information back to a laptop. Some of the drivers would really milk it, cruising around once they realised they were effecting the music. And for some reason they sent me the spec, which I thought was funny, so I framed it.

The Vapours artwork (above)

This is the Vapours snake from Varmints; the artwork we used for the single. I’ve always really liked it, and we’ve got some dodgy made hats with it on. My sister Eleanor painted it – she’s done all of my artwork as a massive favour to me. We are a sort of artistic family as my mum was a paintings conservator but even though I do a mean doodle (lots of triangles) I’ve not got The Gift in the same way Eleanor has. My drawings are like shit versions of hers but as if I’ve held the pencil with my foot. 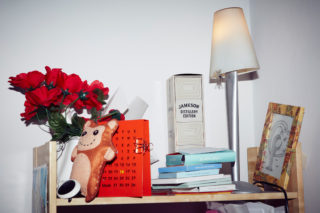 We did a gig in Glasgow a few years ago and I got a message on Facebook from a guy who said his name was Barry Daft. His photo was of him in a clown’s nose holding a tuba – a sousaphone that wrapped around him. And he said, “I really want to come to your gig but I can’t afford it,” so I said, “Y’know what, come on the guest list.” And he turned up, and I could see him in his outfit, and then after the gig he said, “I want to give you something to say thank you,” so he gave us a pineapple, those sunglasses, and the plastic flowers. The glasses were quite important to him as he said he used to wear them in his act. He said he’d been playing my music to neighbours really loudly and getting a lot of complaints. I got the impression he must be a professional clown.

This Jameson’s is actually Bo Burnham’s Jameson’s. There was a film festival where they were playing Eighth Grade, to which I wasn’t invited, but I got this message from someone saying we’d really like to get this bottle of whisky to Bo, and Bo said send it to Anna and he’ll pick it up. Obviously, he’s never getting it now. We do keep in touch though, and we’re going to LA in March so hopefully I’ll blackmail him into coming to that.

Support Loud And Quiet through the COVID-19 crisis

If you are able to and would like to support what we do through the current global crisis, please consider buying an archive issue from our online Shop, or making a donation via our Subscribe page. Many thanks.