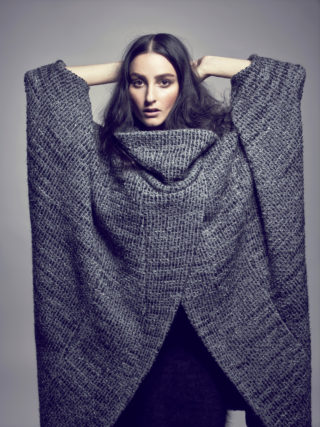 The LA pop enigma in conversation

There’s a touch of mystery around Jillian Banks; a duality that doesn’t quite seem to add up and yet which somehow works. With her pixie-like speaking voice, she seems every inch the ingénue, and the Banks who I chat with belies the powerful vocal heights she reaches in her music. Her evident shyness stands in stark contrast to the strident confidence on tracks such as ‘Fuck Em Only We Know’, and her forthcoming debut album’s title track, ‘Goddess’ – a vociferous feminist call to arms. Indeed, when I congratulate her on completing her first record I get a barely audible, coquettish, “thank you,” that seems to trail off in embarrassment. It’s a reminder that music is one of the great enablers, potentially transforming this 26-year-old music industry novice into the spokesperson for a voiceless generation.

‘Goddess’ may be Banks’ first full-length but it’s a collection which features a host of much better-established collaborators who have beaten a path to her creative door over the last couple of years. Sohn, Lil Silva, Shlomo, Jesse Rogg and Totally Enormous Extinct Dinosaurs give ‘Goddess’ a kaleidoscopic range as it moves from nocturnal electronic dance pop to sombre piano-led ballads.

However, while to the untrained eye it may look as though her rise has come out of nowhere, this is an artist who has worked for over a decade on her sound. As she tirelessly refined what it actually meant to be Banks, she found herself alone, with the exception of a cheap, tinny keyboard, in her bedroom, recording track after lo-fi track until she finally felt ready to give her work over to listeners and critics around two years ago. Yet on meeting this new, hippest of pop commodities, it seems that regardless of what people think, she’s just happy to be in a position to make the music she makes with compulsive drive.

“Releasing ‘Goddess’ is a relief”

Writing, for me, is always just a release. It’s something that I just need to do no matter what, so it was amazing for me to do it. I can’t wait for it to come out officially. I don’t really have any hopes for it once it’s released. I don’t think of it like that. I’m really excited for people to hear it and of course I hope people connect to it, but I think when you make music you can’t really make it in the hope of anything. For me, I just have to make it, and whatever happens with it, happens. Of course I want people to connect to it and connect to me but I don’t really think of it like that.

“Music is a private thing. You shouldn’t rush it”

I think when I met my manager, I started letting go a little bit more and being a bit more open with everything. I think I was just patient with myself for a long time until I felt really, really ready and strong. And for those ten years I was writing and kept it really private. I don’t know… I gave myself time to develop my own voice and develop my own atmosphere and just develop as an artist. I think the time that I met my manager, it was just meant to happen at that time. I felt really ready.

“I didn’t even think of it as practising”

I just wrote non-stop. When I discovered it I just needed it so bad and it was such a special thing for me. It was my safe place where I could be the most ‘me’ I could possibly be. So I just kept writing, and over the years my style changed a little bit. I really magnified all of the things that make me the most me because I was doing it alone. I was just doing it. I just did it and it happened. And then all of a sudden I had my own way of phrasing and my own way of rhythmically singing – probably more syllables in one line than most people would put in. Things like that.

It’s funny; my parents and everyone around me who did know about it, they saw how necessary it was for me and they kept asking me if I wanted lessons. They asked me if I wanted to take vocal lessons or piano lessons because they heard me banging away and I never wanted it. It was such an individual process for me. I didn’t think of it in terms of needing to learn certain things, I just did it! It was my own thing and I never wanted to learn from anybody else.

I don’t even remember because I didn’t even ask for it. All of a sudden I just noticed a keyboard in my room. That’s how organic it was. I never thought, ‘I’m going to start writing music, I’m going to be a songwriter or a singer.’ All of a sudden my little fingertips started twiddling on these keys that just happened to be in my room that I don’t even remember how it got there. It was this really cheap keyboard and I still have it! I still write on it when I’m at home. It’s just natural to write on it because I started out that way. I remember one of my first studio sessions was with Jesse Rogg and I brought that keyboard in and he was like, ‘What is that? Get it out, I can’t even look at it. That’s embarrassing.’ And my manager, Trevor, and Jesse were just cracking up. I just brought it in thinking we would use it to record and I had no idea it was so shitty.

I don’t think you really get to inspire each other’s flavours unless you’re in the same room. They [hook ups with producers Sohn, Lil Silva, Shlomo, Al Shux, Tim Anderson Jesse Rogg, and Totally Enormous Extinct Dinosaurs] all happened differently. All of them are completely different people, and so I have different connections with each of them and different relationships with each of them that maybe inspire different moods.

Working with somebody, for me, is such an intimate experience and process because you have to be so open and honest. And you have to take risks, you know? Music is… you have to be completely non-judgemental because it’s somebody’s heart. When they’re doing it for the right reasons it’s really somebody’s whole heart. And to work with someone who you’re inspired by, when you see their whole heart it’s really incredible. It really fuels me. It’s nourishment. It’s amazing.”

“Lil Silva is the best”

We were on the same label [Good Years]. When I was meeting with them initially they played me one of his beats. He’s so juicy – you can feel his heartbeat in the beat. He’s just the sickest, and I think he felt the same way about me. He just felt me and my voice and the rhythm that I sing in. I dunno, we’re partners and it’s great. He’s awesome.

That’s just off my brain, spewing.

“Goddess may be an hour long, but I left so much off”

That was the absolute hardest thing about this album for me. I still have songs that aren’t on the album that are really weird for me to leave off, because it’s my first album and it was so important for me to touch upon things that made me who I am.

I feel that after people listen to this album they’re going to know everything about me, which is so weird. So it seems like a lot but it’s not because I’ve been writing for so long and I’ve got so much to say, because I was patient with myself because I wasn’t ready but now I’m so ready. I’ve got so many things that I wanted to say. I’ll never have a problem with not having material. For me, it’s like another form of language to me that is a constant dialogue in my life. But I’m really happy and fulfilled with the group of songs that’s on there and they can kiss each other and make out and they all are great together.

I want to say whatever I’m feeling. It’s not as thought out as this but definitely there are underlying themes to the record. I really want to empower people. ‘Goddess’ was such a special song for me to make because I feel it so hard that women are Mother Earth. They’re so powerful and I just want them all to feel the juiciest and most special and most powerful because we are queens. But also, not just women, all people.

I’m really open and I write about feeling really dark and feeling weak and feeling confused, feeling angry. Things that might not make you feel powerful, but I just think that you should embrace those things as natural, beautiful human emotions. We’re not robots. Just embracing the most human qualities of yourself – that is powerful in itself. Even if you try to avoid them they’re there. That makes you a goddess, that makes you a god; that makes you powerful.

“I don’t really separate America and the UK”

A lot of people ask me questions in terms of success in the UK or in terms of America or in terms of Europe. People are people and if they connect to music then they connect to music. Obviously the BBC poll was incredible [Banks came second to Sam Smith in the Sound of 2014 poll] and it’s so flattering and everyone on that list was incredible so it’s really special to be grouped with everyone but I don’t know, I just feel really happy that it happened.

“It’s music or nothing”