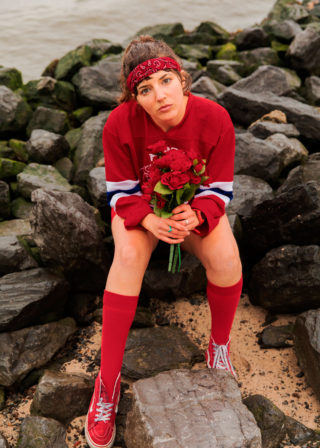 Now she doesn't - and her new album 'Loner' is very good

Somewhere near the epicenter of the new year’s most sarcastic groundswell sits Caroline Rose, a queer feminist songwriter who only wears red. “It’s just my favourite colour,” she assures me. “It’s not symbolic or anything. Over the last five or six years I’ve just, I dunno, weeded out everything that isn’t red.”

Caroline Rose released her second album, ‘Loner’ into the world at the close of February. The four-year fissure in her career from her 2014 debut, ‘I Will Not Be Afraid’, was filled with every material needed for a complete self-reinvention. Where her debut plodded skilfully into rockabilly safety, ‘Loner’ is a complete musical patchwork, irreverently pitching for fans of ’00s pop music as much as ’70s punk rockers, getting in with Justin Timberlake as well as The Cramps.

“I’ve not had a falling out or anything with that kind of music, I’ve just grown to be interested in so many different things that it wouldn’t make any sense to make folk or Americana any more. It’s not been as drastic a change as people think. Over the last three or four years – since I put out that record – I’ve been actively doing other stuff. We started a band, I went through finding a different label and made a bunch of changes putting my team together. I also got way more interested in production and recording my own music. Things got punky in a lot of ways, it was a pretty natural progression that no one saw as those recordings just never came out. The timings just didn’t match up.” 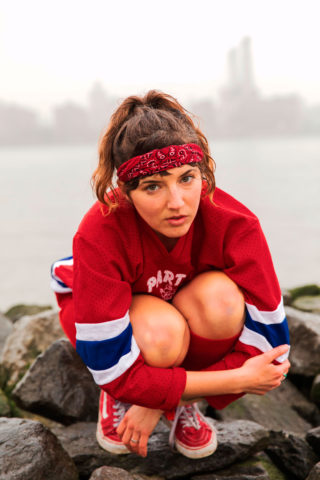 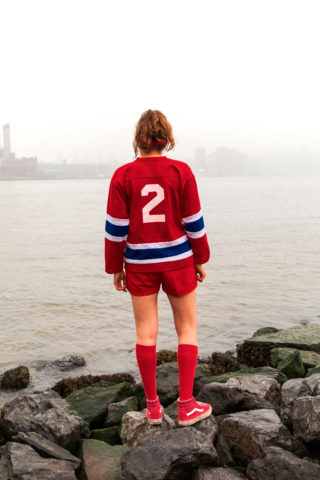 And so what better gesture – more true to whimsical form – than to mark this complete style shift by naming the first track on the new record ‘More of the Same’? “When I first started my career about five years ago, I wanted a totally different thing from it. I wanted to be a songwriter mainly,” she says. “I lived in a van, writing songs for other people. My lifestyle was really basic, but reflected that kind of music.”

The dreams of being a songwriter quickly conflated themselves with the need to be appreciated as a lyricist, so much so that she admits she wanted to make ‘I Will Not Be Afraid’ a record so sonically boring that her words stood out. “But it’s hard to make sarcasm come across in songs,” she laughs. And in the midst of stylistic upheavals, Rose has never been anything but her own mouthpiece. In a record that should be lauded for its musicality alone, its still her humour that takes the headlines.

The record flies through songs about teenage pregnancy and gender norms; from loneliness to misogyny; from shunning industry standards in her riot grrl punk anthem ‘Bikini’ (“We’re gonna fly you off to Tokyo / You’re gonna travel all over the world / We’re gonna put you in the movies and our TV / All you’ve got to do is put on this little bikini and dance!”) to vignettes on the minutiae of hypothetical catcalling in ‘Soul No. 5’ (“I don’t have a job but I got a lot of time / Baby show me yours and then maybe I’ll show you mine”).

“All the songs people are hearing… I didn’t write those for anyone else, I wrote them for me. I think that this album is a pretty good reflection of my personality. It’s very reflective of my character. Although I also just wrote a song for Lana Del Rey and I got so into it. It was a song I had originally written for myself – the early nugget of it – I but it never quite fit into my style of music.” She gives nothing else away, adding proudly: “No one’s heard it yet.” 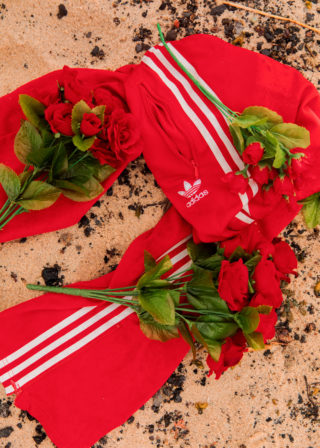 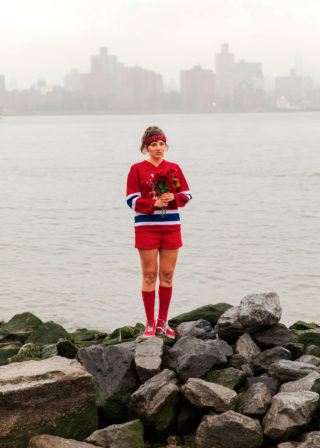 We started with contradictions and we’ll continue. Caroline Rose’s account of lonerism is one from a person with many tales of friendship on a record that thrives on collaboration. Five minutes talking to her is enough to realise she’s genuinely hilarious, not to mention perceptive and personable in a way that would make the popularity contest bow down at her feet.

She acknowledges it looks strange. “It came from the time when I created it. Most of the songs on the album were written when I was living in an apartment in Vermont. I had decorated it to look like the inside of a wacky school bus slash Mexican hacienda – it was a very weird and cool place. I’d kind of created my own little world in there. I had spent a lot of time writing songs and arrangements and production on a computer.

“I was really lonely. I desperately wanted to date someone. It’s very isolating especially during the winter in the North East of the US. It’s very cold. The way I was living in Vermont – desperately close to the Canadian border – it’s like No Man’s Land up there. It felt like I was an island, but it didn’t have anything to do with my business life. At the time I was signed to a label that I would actively be in communications with, be sending songs and stuff. It was just my personal life. So you know, I just felt like shoving a bunch of cigarettes in my mouth and having these dead eyes – it fitted how I was feeling at the time. It’s a little bit strange, a little bit self-destructive. It’s one part humorous, one part… You know.”

The short silence takes us back to the image of her album cover, undoubtedly one of the year’s best visuals. Caroline Rose in a cherry-red tracksuit, stuffing 23 cigarettes into her mouth at once. (No, you counted…) I want to know what happened next, once the cigarettes were in place and lit up.

“It’s funny you ask that. We actually have some footage of it, my friend came over and filmed the whole thing. I had actually shot that picture originally on an iPhone about a year before the album cover was taken, so almost a year and a half ago now. Then we shot the actual album cover six months ago. We took the original in my apartment in Vermont and after we had lit the cigarettes… well, it was a no smoking building and my landlord was very strict… I was like the constant rule breaker.” She explains a story of complete small-town anarchy: “he was like ‘don’t paint the walls’ so I painted the walls teal and yellow, and then he’d be like, y’know, ‘don’t have anyone else park in your parking spot’, and I’d have people over here all the time parking in my parking spot. So I’d get into constant trouble and I was really, really, really trying not to get caught with all the cigarettes in my mouth.

“Then when it came to thinking of an album cover, I knew we had to have this picture but given it was on an iPhone I was like ‘this can’t be the cover, we have to redo the shoot’… we actually ended up redoing it back where we started, in my old apartment.” (She clarifies that she gave the place to a friend after moving out herself, she didn’t break in, although she laughs that that would have made a better story). “My landlord was so upset to see me, like, ‘oh god not this girl again’. Just when you think you’re rid of her she brings a posse full of people in and sticks a load of cigarettes back in her mouth. You know, I haven’t sent him a copy of the album yet, I totally should.” 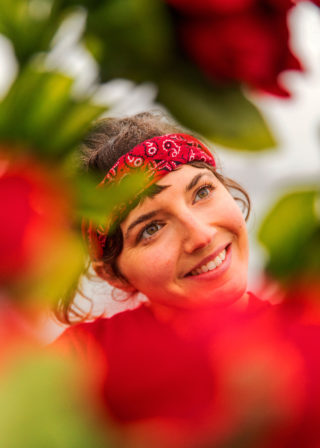 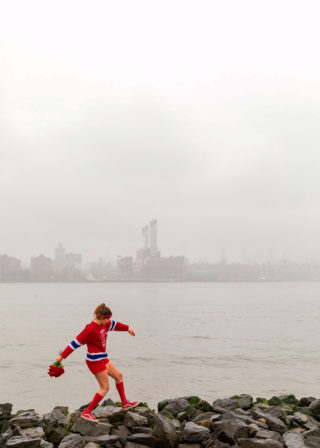 For the first time Rose also dabbled in the production of the record, working alongside Paul Butler, a man more associated with an R&B and soul output (Michael Kiwanuka, St. Paul & the Broken Bones). Having talked to two dozen producers, recording sessions with some and going back and forth with her label, Rose’s story of reinvention seemed to align perfectly with her team.

“When I spoke to Paul, I needed to know that he was up for making a more experimental session with me as the stuff I heard was more soul orientated. I remember him being like ‘nooooo! This is not all I can do!’ and I totally understood where he was at and what he was feeling. It’s really easy to get pigeon-holed when your body of work is only reflective of one thing and I understood that, because the only things that people had heard of my music were very different to the type of music that I’d been making for the last couple of years.

“The first session we did was in this old studio in California filled with vintage synths and modular synths and drum machines, and we set everything up. We’d wake up early, go for a run and then work all day every day, and it was great. Then, for the first time, I took over the project from there.  It’s something I’m planning on doing next album – producing it myself and using the budget to hire the players and work with artists I’ve always wanted to work with. This has been in the works for years now, and I needed ‘Loner’ to be an album I could use to learn from and improve my technique before I did an album completely by myself. Making this album was more like a graduate school programme.”

While ‘Loner’ is still seeping into the peripheries of music lovers everywhere, Rose is still set on the one to follow, which she’s hoping will be ready next year. “It’s not that easy when you’re dealing with a big team of business people, though. For some reason everything in business moves about 10 paces slower than art. I look at it all very differently now, though. I understand that it’s a big group of people, the record label isn’t like a big monster that’s gonna gobble up your work. It’s a symbiotic relationship. We need patrons to fund our art, but the patrons need that art to survive.”

So there you have it. We can’t end without a mention of the elephant in the room, that an American artist has released a political album in 2018. But of all the surprises, she bursts out laughing: “yeah, this was completely unplanned.” She mentions that everything was written long before Trump took office and that there was no springboard, just a reflection of how people have been feeling for a long time. “There’s a very strong feminist movement, there’s a very strong anti-discrimination and anti-racism movement, people are finally fired up about these things because we have a giant fire underneath us. We’re all threatened. This is stuff I’ve been singing about since I started at 16.

“I think ‘Loner’ is just reflective of… if you’re feeling a certain way, and you say honestly how you feel, then given the right atmosphere, it will seem magnified.”

While you were still hurting from the World Cup, Caroline Rose was chugging beers and covering Céline Dion at her first London gig