A lo-fi pop show covered in red and cuddly animals

If you want an insight into the character of Caroline Rose you don’t have to go much further than the cover of her second album ‘Loner’ released earlier this year. She’s there; A goofball oddity in a flashy red polyester tracksuit with a full pack of cigarettes shoved in her mouth. She doesn’t make herself a puzzle, she’s here to have fun, even if some of the songs are light-hearted plays on serious issues.

Inside east London pub venue The Victoria, the chosen décor is almost a little too in conjunction to the theme. Red feather boas are snaked around mic stands and red plastic roses are sprinkled in their masses across amplifiers. Even the prop-like Red Stripe beer clutched in Roses’ hand is on point (maybe her drink of choice, although almost most certainly just an opportunity too good to miss). “Red is just my favourite colour,” she told Loud And Quiet earlier this year.

This is the New York resident’s first London show she tells the sold-out crowd, explaining that the night before in Manchester was “a God awful shit show because it all depended on England winning in the World Cup.” 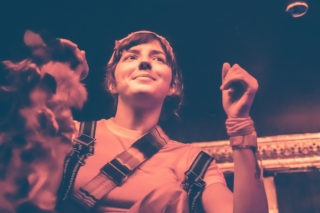 Her stage persona – more likely just her personality – falls between Courtney Barnett’s awkward composure and Mac DeMarco’s goofy grinned charm. Rose is captivating, both musically and characteristically. She’s come a long way since her 2014 rockabilly soaked debut and though she still may claim to be unaware of it, Rose’s improved stance and output has set her on a winning course.

The performance is riddled with countless examples of her ability to write whip-smart pop songs. Bound by fairground synth stabs and rock ‘n’ roll leg kicks, Rose showcases her unquenchable pop presence during tracks  ‘Cry’ and ‘Jeannie Becomes A Mom’. Before unloading into crowd favourite ‘More Of The Same’, before which she regales the story of the song’s messy inception that involved anticlimactic parties, boys in salmon coloured chinos and shit back garden sex with the punch line eventually being, “the lawn was wetter than I was”.

Later, there’s the revved up punk power of ‘Money’ where during a short but eventful intermission, Rose downs her can of Red Stripe sparking a chorus of “fucking hero” behind me, only to then whip out a recorder and play a ridiculous rendition of Céline Dion’s ‘My Heart Will Go On’. Sparking the entire audience to belt out every word and help her see the song home, Rose and her band slam back into ‘Money’s’ monster guitar and synth hook. There’s also a bit where she strokes a stuffed toy cat (Chelsea), giving it a human voice and a rubber chicken on stage. “Only three more hours of comedy then we’ll play some music,” she quips.

Mulling over her intense dislike for encores, Rose wraps it up with eerie, submerged melody of ‘Die Today’ before ramping it right back up with ‘Loner’’s closing crescendo ‘Animal’. Though still relatively unheard of, Caroline Rose bears all the hallmarks of a force to be reckoned with. With surely more fans and bigger venues on the not so distant horizon, her red-paved road to something much greater is well and truly underway.