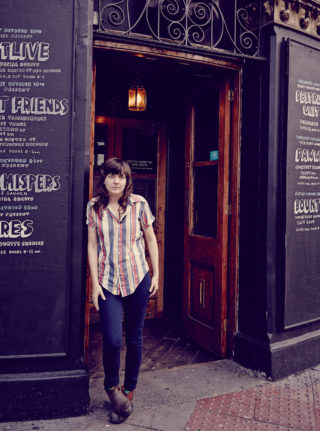 “How do I do that? I’ve never used Skype.” Courtney Barnett is struggling with the camera on her laptop. I can hear her but unfortunately I can’t see anything other than a static avatar of her smiling face and checked shirt. I’m tired and hungover and so I concede that video might not be the best idea anyway. Plus, I admit, I’d rather not be subjected to the backdrop of the sunny Melbourne evening she describes as the rain teems down in London. Besides, given that the self-portrait she puts forward on Slacker mea culpa ‘Are You Looking After Yourself?’ isn’t exactly one that embraces technology (“My TV, it stopped working when we got here / It’s been four years”), I choose to see the fact that we’re having this conversation at all as somewhat of a triumph.

Though I can’t see her face, Courtney seems to speak with a perpetual crease at the corner of her lips. It’s no exaggeration to say that I can, quite audibly, hear her smile as she chats about her new life as a rising star. “I got back from overseas like three days ago and I’ve just been catching up on work. After this I’m going to a party. I’ve got a friend sitting out in my garden. It’s my birthday tomorrow. So I’m just ready to – you know – have some fun.”

Having dismissed the idea of a record deal early on, Barnett took things into her own hands by creating Milk! Records. “I didn’t really think about it, to be honest, when I started it. I had no idea of the music industry and I just assumed that getting a record deal, in inverted commas, was quite a far-out concept, so I didn’t even consider it.” By distilling the notion down to its simplest form, it became clear that she could take on a lot of the work herself. “I was like, ‘Well, what is a record label?’ A record label is just a middle man to get your music to people.” Not only that, but she feels that if the music is reaching the people who care the most then her job is a successful one. “I was playing a shitload of gigs at the time and I prefer my music to go to people who are nice and enjoy the music, who come to the shows and tell me that they’re interested and they want to buy the CDs. I’d prefer for those people to buy the records than a hundred other random people who probably don’t give a shit. I was kind of going for quality over quantity and I figured I could just do that myself. It just kind of grew from there. I thought, ‘I can just do this. I can do my own artwork and post CDs out to people.’”

While she admittedly stumbled into the business, the 25-year-old isn’t content with releasing only her own music through the imprint. “We’ve got a few other bands at the moment and I reckon we’re gonna branch out and get a distribution deal or something. Which is something that I never even knew about before. We’re gonna keep the same general idea in progress.” She’s pretty confident in her roster and one of Barnett’s lyrics goes, “My friends play in bands / they are better than everything on radio.” I have to ask: are they? “Yeah, I reckon! I’ve got heaps of friends who play music and they’re great. It’s a very broad statement, but there’s lots of shit on the radio and there’s lots of bands who get famous because they have a lot of money. There’s also a lot of really great bands on the radio so whatever. But it’s a bit of a tongue in cheek comment saying that my friends make cool music as well.” 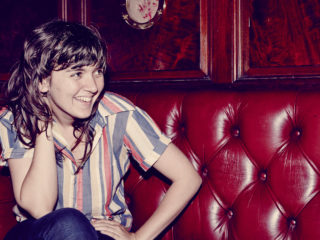 The commercial side of things nicely covered, then, we move on to the music itself. The first thing that strikes me about Barnett’s work is how she approaches its words. Meticulous in her depth of detail, she zeros in on the finer facets of scenes to create a kitchen sink surrealism that’s astoundingly vivid and punctuated with beguiling candour. “I reckon that’s what makes songs interesting. It means that they’re realistic. Otherwise you’re just singing the same song that everyone else sings.”

A beautiful example of this is ‘Avant Gardener’, a song that has been garnering significant online buzz in recent weeks, helping to drag Barnett into the heavily European and US-curated indie discourse. It’s a wonderfully woven tragicomedy that reflects on how a well-intentioned idea to do some gardening on a scorching Victorian summer’s day resulted in hospitalisation. Told as a stream-of-consciousness, list-like chronology, Barnett’s almost-monotone passivity and matter of fact recounting of what is, in truth, a shocking tale means that its punch lines (“They call up triple o”) become all the more surprising. I’m interested to learn that only a splash of poetic licence was employed. “Aw that song’s maybe 99% truth,” she says. “The only untrue bit is the adrenaline to the heart… I got it to the thigh. Adrenaline to the heart was because in Pulp Fiction she overdoses and she gets it to the heart.” It sounds like a bad day. “It was a terrible day. I thought I was dying.” But it’s the way in which Barnett plays with words themselves that is so striking. Lines are sprinkled with half rhymes so that seemingly straightforward lyrics reveal themselves as deliberately ornate structures when you look at them written down: “Halfway down the street, Andy looks ambivalent / He’s probably wondering what I’m doing getting in an ambulance.” Barnett has a way with the mundane like Jonathan Richman.

An unswerving preoccupation with authenticity also pervades The Double EP, a collection that is, unsurprisingly, made up of two of Barnett’s extended plays welded together. Early single ‘Lance Jr’ is patently honest in its disclosure that the singer masturbated to songs written by the unnamed subject, while ‘History Eraser’ is so overwhelmingly open in its admiration of the person in question it’s nothing less than disarming. “All my songs come from my journal,” she tells me. “I write everything down and then turn it into a song later. The honesty thing is just my way of dealing with and communicating my thoughts, my worries, my whatevers with the people around me because I’m not very good at talking about things. I just turn it into a song and maybe make it a bit awkward. Sometimes it takes me ages to write a song, so my response to a conversation might come out a year later. You know how like if you have a fight with someone you write a letter – you don’t want to yell at them so you write it down and figure out what your problem is and what you’re actually feeling.”

The procedure functions as a sort of self-therapy for Barnett, allowing her to get to grips with her emotions and how they tie in with her relationships with others by shoehorning them into the perfect paradigm that a song structure provides. “You understand it and then once you understand it it makes it easier to communicate it to that person. That’s kind of what the process is for me, to understand what I’m thinking.” 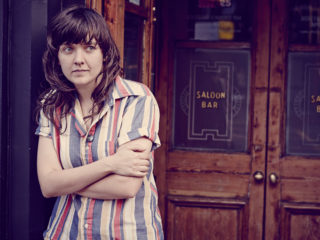 Whilst romantic encounters and the ensuing farces provide a large chunk of the inspiration, even Barnett’s mother makes an appearance on ‘Are You Looking After Yourself?’. As the singer re-enacts a humdrum phone call between the two, we get a comical insight into their relationship, her mother’s worries (“Are you eating? You sound so thin.”) and her own relaxed framework for life. Thankfully, however, it hasn’t put a strain on the filial bond. “She has shown great support for my music. When that first CD came out she actually brought up that song and she was like, ‘I’ve never said that,’ and I was like, ‘Well, you kinda did. But that’s ok.’ She’s cool. I don’t think she was offended, she kinda thought it was funny. I mean, I’m having a carrot with some cheese for dinner, so that answers your question.” She laughs and I am moved to come out in support of what sounds like a balanced diet of complex carbs and protein. “Yeah, I think it’s good,” she says.

Though it’s obvious Barnett doesn’t afford much importance to semantics, she is careful to make sure that The Double EP isn’t regarded as her first album. The product of two very separate eras in her life, she wants it to be viewed as such. “It’s not like it matters that much but essentially I wrote one EP a year ago and then wrote the other one after that. They’re totally different parts of my life but essentially the international interest came around the time of the second EP. So we just decided to put them together.” She laughs again and reveals the real motive behind the release. “I wanted to put them on vinyl together! We’re starting plans to record [a proper debut album] ASAP, though,” she reveals. “This is the first time off I’ve had since forever, it feels like. We just got back from overseas and I’ve got to go back to work next week, but no more touring for a while. I’m just going to spend my time reading books and writing and playing guitar, all those things that I haven’t done. I feel like I’ve only been playing guitar when I’ve been playing shows. I haven’t been sitting down and writing a song or anything.” And although she loved the tour (“It was really great”), she lets out a sigh of relief for the opportunity to focus on her art. “I write on the plane and everywhere but it’s nice to have the time off and spend time with my people and go back to work.” She pauses. “…And live a real life.”

I ask her exactly what real life looks like. She asks me to guess what she has to do to earn a crust. She isn’t, sadly, a brain surgeon. “I just work at a pub. I have for years. Lots of musicians work in pubs and I’ve worked in a pub since I was 18, but I’ve also had day jobs as well as night jobs. And day jobs are so much better for a musician. Working in a pub is ridiculous because all of your rehearsals are at night and your shows are at night. So you end up asking for three nights off a week. I worked in an office from 8am to 4pm or something and then you’re sweet. You can make soundcheck and then do your gig.” Sounds perfect, then. “Yeah, but it killed me inside. I couldn’t do the office job. I got depressed. It drains me. But I do a lot of them. I get so bored easily so I get new jobs all the time. And you see people who’ve been there for 30 years. You know that person in the office who’s the know it all? You know that person, right? It’s so tense.”

And so I let Courtney Barnett get back to enjoying her pre-birthday celebrations, though she counters my seasonal jealousy with a characteristically droll riposte. “Whatever people say about London, I prefer the rain and the miserableness to the heat. I hate it.” Well, where’s the fun in fitting in?