The London post-rock group on their uncanny sense of timing

Everyone has become an expert in expecting the worst these last few months and London-based post-rock band deathcrash are no different.

Having finished recording their second EP, people thought my windows were stars, with Ric James in his East London Lockdown Studios (yes, it’s really called that) in mid-July this year, the quartet admit they were anticipating “having to beg people to buy our record”.

Of course, there were reasons to be concerned. There is barely any live scene to help promote them, their average song run-time of over ten minutes could appear daunting compared to the mountains of easily-consumable three-minute bangers out there, and the music itself can be best described as slow – really, really slow.

Despite things looking sketchy, something rather unexpected happened in September, with guitarist and vocalist Tiernan Banks recollecting, “As far as we were aware, no-one listened to our music, but then we suddenly sold out the EP [people thought my windows were stars] in 24 hours, and then the week after we sold out our gig [a socially-distanced concert at St Pancras Old Church] in less than a day too. So much changed in two weeks. It was just such a huge surprise.”

Since then, their three-track EP released through emerging London tastemaker label Untitled (recs) has been scheduled for a second pressing and recordstore.co.uk crowned it EP of the year. Not a bad lockdown’s work by anyone’s standards.

However, you get the sense that for deathcrash, a band of four self-declared introverts who met at Cambridge University, this all went slightly against the script. Bassist Patrick Fitzgerald half jokes, “We are riddled with insecurity. We laugh, but it’s true.”

This unassuming group never sought the limelight but can’t help but be bemused by how well their slowcore sound has synced up with 2020 – their sonic wave visualisations near-parallel the Daily Briefing charts we have been inundated with this year. “It’s funny that the world seems to have done a dramatic shift to suit our music a bit more,” says guitarist Matt Weinberger, and it’s not hard to see how the band’s pressurising songs, that build gently from a quiet whisper to a thunderous, unsustainable peak, could resonate in today’s world.

Despite its near perfect fit, Banks clarifies that deathcrash’s sound wasn’t influenced by this year’s zeitgeist, asserting, “2020 has changed the circumstances of how people respond to our music, but we were always writing in this way.”

On the origin of their incremental sound, Weinberger notes that the band deliberately took the note less travelled in 2018 when they moved to London and entered its blossoming rock scene. “When we started playing music in London, there was a certain kind of music in vogue,” he says, “this quite aggressive, fast post-punk… Maybe that led us to make a slower kind of music.” Banks and Fitzgerald have first-hand experience of this, as former members of post-punk London bands Famous and Sorry, respectively.

deathcrash’s sonic identity is equally distinctive, avoiding the scene’s typical influences of Nick Cave, Kanye West and David Bowie, drawing instead from a nestled nook of sound situated in Clinton-era America, with Weinberger detailing, “We found these ’90s American bands that had been swept under the rug somehow. There was a real joy in finding them and opening up this whole world. Like Duster, Bill Callahan, Bedhead and Sparklehorse. And [Slint guitarist] David Pajo has been a huge one for us.”

people thought my windows were stars learns its lessons from the lo-fi dynamism of these artists who toy ingeniously with loud/quiet/loud tension and release: the very faint and the bloody obvious.

Drummer Noah Bennett rationalises, “You got to have the heaviness in there to make the quiet bits sound good. You couldn’t call them quiet bits if you didn’t have a few sections that are really in your face.”

Across the EP, the instrumentation slides from folksy acoustic strums to dominating power chords, from gentle hi-hat taps to stampeding toms, from mellow bass vibes to beefy plucks that signal impending breakdown.

The oscillation can be intoxicating, making the EP’s 40 minutes simultaneously accessible and complex, with Weinberger pinpointing their stirring, occasionally explosive music as sitting philosophically between “‘You can have it on in the background and it sounds really nice’, and ‘that in there not being a lot there, there’s a lot to focus on.’”

Accompanying the band’s tense, terse soundscapes, Banks’ teasing and suggestive lyrics float through the music’s incremental gear changes. Describing the lyric writing process Banks says, “They start out as specific things in my life and I try to make them more universal… Leaving room for interpretation.”

Throughout the EP there are loaded lyrical references to ‘sickness’, ‘falling ill’ and ‘wards’, part of a foggy contemporary narrative that never quite elucidates whether the ‘sickness’ is you know what or a spousal malady. It’s unclear during EP closer ‘Songs for M i-iv’ whether Banks’ tortured whisper of ‘Don’t settle, come back’ is a heart-wrenching goodbye, a desperate plea to return or nothing at all.

Fitzgerald extols particularities of this quiet, reflective sound and interpretative verse possesses, asserting, “You get to have a relationship with that kind of music. I always try to find some sadness, darkness and beauty in music and I find that with slower or quieter music it feels easier for that to happen.” 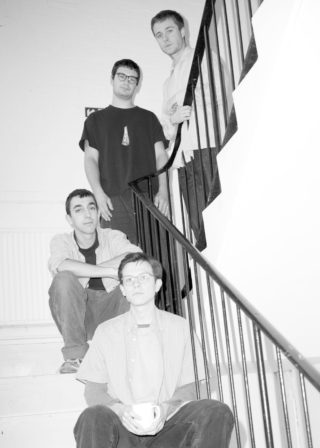 Like so many other questions posed by the pandemic, you wonder what will revert back to ‘normal’ and what will stay as it is when this is all said and done. I ask deathcrash whether there will be an audience for slowcore when London’s fast post-punk bands come roaring back to the eagerly awaiting boozers and bars?

Weinberger is facetious. “It would be great to have some kind of apocalypse next year too,” he says before Bank’s half-joking, half-serious adds: “We got lucky with that this year. Maybe when the [debut] album comes out next year, no one will care anymore.”

But behind the jesting, they are quietly optimistic, with Fitzgerald affirming, “Our music speaks less to spectacle and more to the internal stuff. Maybe people have just slowed down and that resonates, but I would hope it would stay relevant to people beyond the lockdown.”

Truthfully, deathcrash don’t require claustrophobia or gloom to shine. Despite being slow, contemplative and occasionally moody, their music is fuelled by wonder, possibility and intrigue, not negativity or pessimism. You feel it will be just as vital in a recovering world as it is in a suffering one.

Bennett qualifies this, mentioning that even in the midst of recording the EP’s epic title track on the eve of the first lockdown in March 2020 “hope was a word that I wanted to have included in the press releases, it’s what I get out of listening to our music.”

Fitzgerald nods, adding, “Sometimes it’s easier to take a cynical stance on things, but I think for us in expression and music, we will avoid cynicism. Hope is definitely a big part of the sound.”

Like one of their atmospheric comedowns, the interview peters out naturally from there. The four polite lads say their goodbyes and return to their East London flats. With the final breath of the interview devoted to hope, it seems about right.