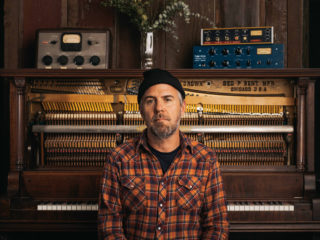 In the years since Jason Lytle broke up Grandaddy in 2006, citing fatigue, weariness and bankruptcy as his reasons, he has married, divorced, and moved from his hometown of Modesto to Montana to Portland Oregon and back to Modesto again. With everything seeming to come full circle, then, perhaps it makes sense that he’s also decided to put Grandaddy back together, write them a new album (‘Last Place’ out on 3 March) and take them out on tour.

At the same time, there hasn’t been a more apt time for a Grandaddy comeback: their thematic calling card of technology becoming first sentient then either malevolent or disenchanted feels queasily prophetic in the opening months of 2017: just this week, headlines such as “German parents told to destroy doll that can spy on children” wandered around the internet straightfaced, while increasingly self-aware social media algorithms lob hand grenades into the most delicate political situations.

If the feeling that we’re all now living inside a Grandaddy album has been growing since the Millennium Bug bluffed the world into needless submission right around the time ‘The Sophtware Slump’ was released, it seems now, 17 years later, we are approaching peak Grandaddytopia. Jason Lytle, meanwhile, just keeps on keeping on.

“It’s been a kind of dark couple of years”

If I wouldn’t have had this new record to cling onto – well, it was kind of keeping me afloat. And in that respect I’m on the lucky end of the spectrum, as far as humans go, because I have a pretty good outlet in music, and some other people just can’t articulate it. Their pain just starts festering in them and they end up in therapy, all medicated, and screwed up and suicidal. I really don’t take anything for granted, but with me it’s nice to know that even when life sucks so fucking bad, if I keep hammering away at the music and really get the pain out, something good’s gonna come out of that.

“I have no problem being repetitive and simple, and working within my confines”

In fact, when I’m told that I’m being repetitive and simple, I take that as a compliment. But believe me, I’ve tried to experiment and do different things. I’ve got a hard drive that’s full of bad experiments! Thing is, I often joke about this, but all I’m ever trying to do is re-achieve this feeling that I had when I was eight years old, of listening to music as a little kid with headphones on in the privacy of my own bedroom, just being transported to this other place. That’s all I ever want. I’m not trying to dazzle anyone with my skills: I love playing the piano, and I love playing the guitar, and that’s it. I mean, even as a runner – I like to run – it’s not about speed for me. It’s just about how you’re feeling while you’re running, and that’s where I’m at with music. It doesn’t have to be flashy or virtuoso, and I have no problem with being lowest common denominator – that Blur song, the woo-hoo one, is one of the best songs ever made on this planet! And I don’t mind being conked over the head by a good melody from time to time!

“I like when I hear something pure, something that makes me think, ‘oh he was having fun there!'”

If I nailed the moment, that’s the thing. What’s a bummer for me is if I’m listening and I think, “ah you came close on that one but you didn’t quite nail it.” Of course you’re only going to be getting bullseye every so often – it’s unrealistic to assume that authenticity and purity is always going to be intact – but as long as you’re having fun in the process of attempting to do so, it’s okay. I guess the problem is that it’s difficult to remember to have fun sometimes, especially if you’re not having fun! 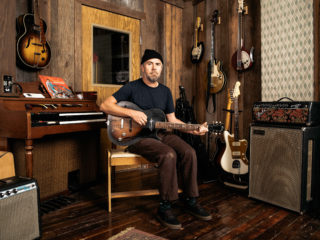 Whenever I get in the car I will play the first two songs on that album on repeat, and I’ve never had that sort of fixation before. But it’s one of those things where I have to be careful of what company I’m in when I play it, because I know that A-ha aren’t very cool! They’re such a good band, though, and they’ve got so many other incredible strengths. If you want to get into them, start with ‘Cast In Steel’, and then if you want to go a bit more vintage, try ‘Scoundrel Days’, which is the album that came out after ‘Take On Me’ and I think was a commercial flop.

“I’m old as fuck, and probably wore my body down a bit prematurely when I was skateboarding”

Those old skateboarding injuries are coming back to bite me in the ass now, but I’m definitely glad I’m not one of those people who’s spent their whole life working in a cubicle and is only now looking forward to living by the golf course. I figure you can either have all the fun times in the front end of life, or in the back end of things, and I did it at the front, and I’ve been fucking killing it: I’ve been having a good time for the last 45 years, and I’m starting to creak because of it, which I guess I can’t really complain about. I had a good time, now I’m getting what I bargained for.

The problem with touring is the hours when you’re not actually playing: there are loads of people always around, and I’m a very private person. I live by myself when I’m at home, I don’t have family and I need a lot of quiet, and you get none of that on tour, which starts to wear me down after a while. But I still like playing, and the actual go-time is the bit I’m into. The pressure is good – you’ve come all this way, people have paid all this money, and you’ve dedicated your life to this. There’s something that sort of really wants you to rise to the cause, just go out there and conquer the beast that’s trying to kill you. 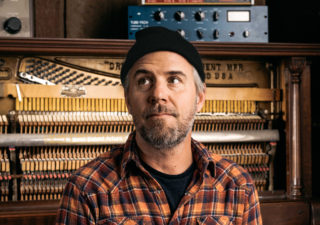 “Solitude is really important to me“

That alone time is my way of processing life, and it’s when I really start to feel like I’m figuring things out. Like, in your everyday life you have all these things that get thrown at you and some of them are like, “well I definitely can’t make that decision right now with all this other stuff going on.” And so I need quiet periods when I can start processing things and make better sense of them. And then all of a sudden I’ll be like “oh, that’s the answer”. I love the idea of living out in the middle of nowhere by myself with just two really nice mics and a piano, and nice big fat tape machine, and just every now and then I’ll record a song that I’m excited about. Sounds lonely, maybe, but a guy’s gotta have a dream!

“If all you know about California is San Francisco and LA, you’d be pretty confused by Modesto”

It’s sort of a sprawling, working-class town. There’s no culture, no museums, no venues, no charming downtown area, so I don’t really know what people do on Friday and Saturday nights there. They probably just get drunk and fight. It’s 200,000 people – not a tiny place – but it still just feels like a town that’s on the way to someplace else. There’s a big inferiority complex, and every few years you’ll get a handful of people who’ll be like “we’re going to stay in Modesto and make this place cool!” and, well, good luck with that. The rest of the guys in the band live in Modesto though, so I try not to badmouth it too much!

“The rest of the band have jobs, and have spouses who have jobs”

As for me, my financial situation for the past fifteen years has been anybody’s fucking guess. It varies so wildly from year to year: I mean, I had a couple of years when I was sweating bullets, and then all of a sudden I had a song in a movie or a commercial and I can rest easy for a bit, but there are never guarantees. That said, I’m starting to discover now how hanging in there can start to pay off. But really, I don’t require a lot. I have nice audio gear and recording studio stuff, but apart from that I have a pretty simple lifestyle. I think my ace in the hole, though, is to find a really cool girl who has a normal job!