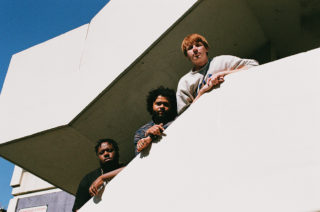 "That's what's special about being in hip-hop, especially in 2019 – there is room for artists like us."

With a couple of days to go before the release of their self-titled album, Arizona rap trio Injury Reserve aren’t too sure how excited they should feel. “The jury’s still out,” producer Parker Corey tells me, admitting to some nerves about how the group’s debut effort on Loma Vista will be received. Their avid online fanbase has embraced the three singles shared from it so far, but the experimental group are conscious that these tracks represent only part of the wider story told by Injury Reserve. Corey likes the idea that they have kept listeners guessing, though: “It seems that the draw so far for people who have really liked the singles,” he says, “has been less, ‘Oh, I love this song,’ and more, ‘What is this album about to be?’”

It’s a sunny afternoon and we’re sitting in a room at their label’s London offices – me, Corey and rappers Stepa J. Groggs and Nathaniel Ritchie (known as Ritchie With a T). The trio are in town to complete promotional duties for the record, which will culminate on the eve of its release with a sold-out show at The Victoria in Dalston. They are in good spirits, looking back at the hard work that went into realising their debut and allowing themselves a sense of achievement.

Some of those heading to the upcoming London gig will claim to have followed Injury Reserve since their first mixtape, 2015’s Live From the Dentist Office. That project, recorded after hours in an actual dental practice, showcased Corey’s crisp production skills and introduced Groggs and Ritchie as a potent vocal duo. The Phoenix trio followed it up with the arrestingly experimental Floss LP in 2016, which boasted big name features like Vic Mensa and moved them away from their early jazz rap sound. They continued to push themselves the following year, adapting to minimalist beats on the ominously moody Drive It Like It’s Stolen EP.

True to form, the self-titled album sees the group constantly on the move, refusing to linger in any potential comfort zone. After revelling in the chaos of a ferocious opening act, Ritchie and Groggs successfully keep up with each of Corey’s instrumental left-turns. The pair are sensitive when the album turns inward, delivering bars on tracks like ‘What a Year It’s Been’ and ‘Best Spot in the House’ that engage with themes of depression, alcoholism, and self-doubt. They also display impeccable comedic timing, rapping with a self-awareness that humanises the record’s heavier moments.

Consciously rejecting a coherent sound, Injury Reserve instead draws its conceptual form from the drive that Ritchie, Groggs and Corey brought to each track. “When people were asking if the album sounded like (lead single) ‘Jawbreaker’ we told them, ‘it doesn’t sound like this, but the album’s approach is like this,’” says Ritchie. “We don’t like making the same song twice, but you can tell that whatever mindset we were in making those songs, that’s what is really gluing it all together.”

“There’s a sense of antagonism throughout the album,” Corey expands, pinning down the essence of the group’s approach. This often manifests itself lyrically – Groggs uses the album’s first track to voice Injury Reserve’s frustration that they “don’t get enough shine” from mainstream music publications – but the trio are keen to stress its musical implications too. “It’s not just what we’re speaking about, it’s also what we want to sound like,” Ritchie tells me. “A lot of the changes on this album lie in arrangement. I think that’s where we’ve improved a lot – things are less predictable.” 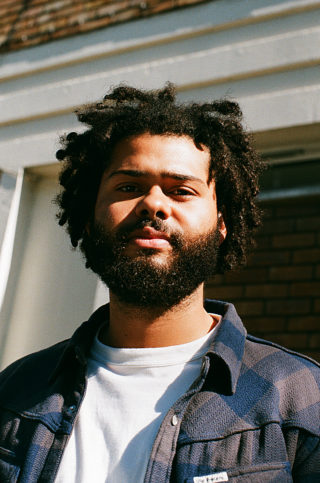 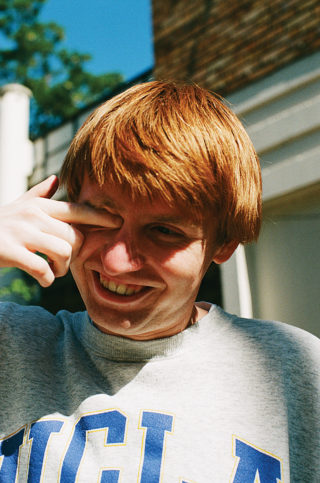 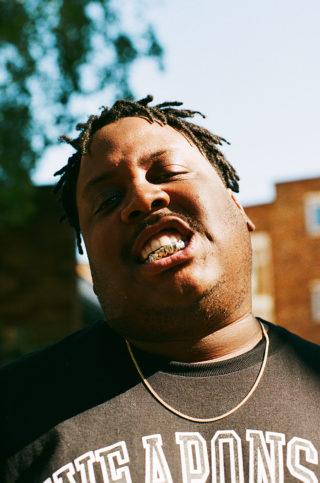 For Corey, this meant being less formulaic with structure and “taking the doors off” songs. “A lot of this album is about just keeping it pushing,” he says. “There’s very little room for repetition.” The producer sacrificed closing hooks for the greater good of momentum on tracks like ‘New Hawaii’, and looked for more dynamic ways to bring closure to passages. On ‘GTFU’, a suffocating industrial soundscape appears to give way to a haven of calm, before that too grows overwhelming; an unnerving full circle that never feels safe.

Thoughtfully placed guest features add dynamism too, helping to reinvigorate the album’s narrative as it unfolds. Some standout verses were planned from the start: Corey knew, for instance, that New York rapper Rico Nasty would bring a “fresh perspective” to ‘Jawbreaker’ – one that sharpened the song’s unapologetic critique of the fashion industry by opening fire on its treatment of black women. The group also had faith that Cakes da Killa would deliver for ‘GTFU’, given the Brooklyn rapper’s searing performance on 2016 Floss track ‘What’s Goodie’.

Other collaborations arose from inviting artists to the studio and finding out what intrigued them. Portland rapper Aminé (a close friend of the trio’s) wanted to be on ‘Jailbreak the Tesla’ as soon as he heard a demo of it. His verse on the finished version, complete with lines like “Your engine go ‘Vroom’, my engine go –” reads ridiculously on a lyric sheet but adds to the track’s pulsating sense of fun. “It makes a big difference when someone really wants to be on a song,” says Ritchie. “You feel the passion that they put into it.”

The group spent time integrating these guest features into the album, and it’s a sign of their attention to detail that the finished body of work feels so seamless. The processes involved in achieving this were often headache-inducing: Corey remembers having to fully rearrange the beat of mid-album track ‘Wax On’ in order to house a gripping Freddie Gibbs verse. “I think what we do well is make the features feel a lot less cut and pasted,” the producer proposes modestly.

“We wanted to make it feel more fluid and interactive,” Ritchie elaborates. “That’s the luxury of having a producer in the group. We can approach mixes and ask, ‘how do we make this feel natural?’” 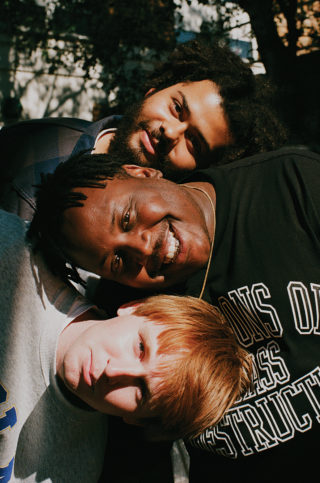 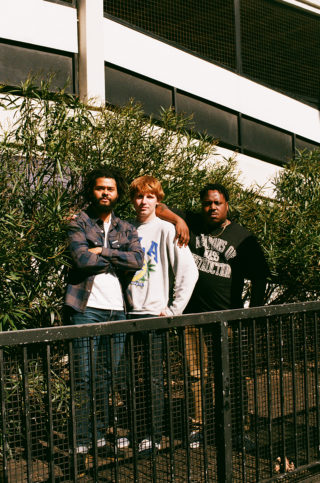 It’s worth taking a moment to ponder what would feel “natural” to Injury Reserve. The trio grew up in Phoenix, Arizona, far away from any discernible hip-hop scene that they could adopt as their default setting. The record acknowledges this, teeming instead with references to the mid-2000s internet culture that they tapped into. An interlude that samples fellow Arizona rapper Lil QWERTY’s ‘Kodi Fire Stick’ pays respect to the fourth grade “BearShare bandits” who always knew where to find new releases for free, while Ritchie raps on ‘Jailbreak the Tesla’ that a jailbroken iPod Touch gave you “Limewire on crack”. Groggs calls the virus-ridden app a “hassle” when we reminisce, still pained by all the unwanted mixtapes mistakenly downloaded.

Corey, who is the youngest of the trio at 23, has stronger memories of the slightly later YouTube to MP3 converting era. He adds that this came with its own set of hazards: “I remember I did YouTubeMP3s of My Beautiful Dark Twisted Fantasy and I didn’t know that ‘Devil in a New Dress’ existed for six months. You know, maybe the best song on the album,” he confesses with a smile. He comes in for warranted ridicule from Ritchie and Groggs – the group have previously cited Kanye West’s 2010 record as a key inspiration behind the whole Injury Reserve project.

They’ve long since uninstalled The Pirate Bay from their computers. They do, however, reject the data-derived streaming culture that has guided many people’s musical discoveries in more recent years. “That’s the way algorithms work: ‘sound like this, sound like that,’” says Corey, as he pretends to pinch separate atoms of music from the air before grouping them together. His group pride themselves on channelling both experimental and accessible forms of music, searching for the kind of nuance that Spotifycore ignores. “It doesn’t push anyone at all,” says Groggs.

“The only playlists I dive into are the ones that we make for each other now, which are super album-based,” says Ritchie. “We’re big diggers, and we are always looking for cool shit that’s bringing a new perspective.” They mention, for instance, their intrigue in London-based bands Jockstrap and Black Midi. “Finding out what people are and aren’t doing lets us find a pocket that isn’t being touched. It’s a little bit different being album-based artists in a playlist era, but we’re going to keep doing our thing because we know that albums are what stays and lasts.”

By gearing their music towards an album-length experience, the group felt they could engage with a broader range of human emotions. As Ritchie puts it, “We can’t get our full mindset out in two minutes and forty-three seconds.” Injury Reserve is therefore defined as much by its sincerity as its humour. In one particularly moving moment, Groggs discusses ghosting loved ones and coming to terms with a lack of self-control on ‘What A Year It’s Been’.

“There was a certain point where, up until some rappers, there wasn’t room for some of the things we talk about,” says Ritchie. The group have often spoken of their admiration for groups like A Tribe Called Quest and De La Soul in facilitating this change; they also credit the candidness of Kanye West and Little Brother’s seminal records. “Danny Brown has been big for that too,” Corey adds, turning to more recent examples. “Often some of his darkest shit was on the biggest party tracks.”

“Even thinking about Drake being the biggest rapper in the world right now. Drake is as soft as I am,” says Ritchie, meaning this as no negative comment. “It’s very encouraging to just be yourself. That’s what’s special about being in hip-hop, especially in 2019 – there is room for artists like us.”