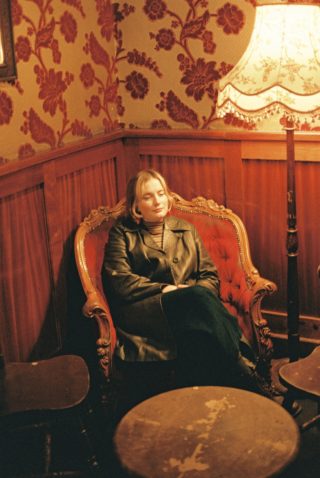 "I’ve been wearing double denim since I was 15"

“The only thing I want to be able to do in 2020 is to safely ride a bike,” says Katy J Pearson, resolutely but with a smile, sitting in a quiet booth in the corner of London’s Lexington pub. She’s one of these people who speaks so warmly and excitedly that she barely takes a breath between her sentences; words just come flying out. “I want to do another cycling proficiency” (apparently that didn’t go so well first time around). “I’m a bit dangerous on a bike,” she admits, “and I don’t drive. My left and my right’s are just not a vibe. And, I mean, I live in Bristol where literally everyone cycles. All my flatmates cycle, but if my parents hear that I’m even about to get on a bike, they’re like ‘no.’ I’m almost 24.”

She continues to tell me about a recent trip she took to Amsterdam where she cycled everywhere, and was fine. “I didn’t get run over at all!” – a veritable badge of honour. All it took was a lot of research about the cycle paths of the city, where parks come with wide walkways and gliding along the canals is as commonplace as breakfast. She reflects further, letting go of the sadness that held back her cycling career, taking her head out of her hands and laughing a little. “Yeah, I don’t do many of these new year resolutions. My only goal is to start the year not feeling so hungover that I’m severely unhappy.” Is March too late to be telling you about the dawn of the new decade? Almost definitely. 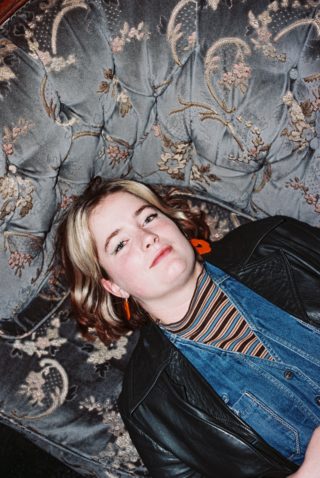 Katy’s been based in Bristol for almost three years, but there’s still an element of Big City Living, having grown up in semi-rural Gloucestershire. The space between Cirencester and Stroud is one where everyone knows everyone with a kind of Midsomer Murders familiarity. She exclaims as she realises we share a friend in Stroud, bounding through stories about him and the small-town black markets that pop up around Glastonbury. Or, the one time something happens.

“I can’t live in London,” she segues into the conscious decision you have to take as a musician to draw yourself away from the capital. “It’s a great city, I just think it doesn’t do anything good for me. I don’t feel at all inspired, just creatively overwhelmed. It feels so full that there’s no breathing space. With my old band, I was here a lot but never found my cup of tea here. I think I was too sensitive for it.”

Before penning the dream deal with indie heartthrob Heavenly Records, Katy was in a hype band with her brother called Ardyn. A major label deal and three EP releases down, they were dropped before putting out a debut album. It was the kind of situation where parameters for success had to become recalibrated – 14 million streams just don’t cut it. “When we were dropped, my brother and I moved back home, and he had glandular fever and so I just went into the studio every day by myself, using Logic and started writing. It was hard work, once you’ve been on such a busy journey. As soon as it stops you hit the rock bottom… or at least, a very low point. Maybe that was how I was able to write these very personal songs. I was writing to make myself feel better rather than writing to do something for my career. It definitely gives you a bit of a kick, too. When it’s only you, you realise that you’ve got to do all the work or literally nothing happens.

“When I was signed to a bigger label and had more of a monthly income, I found it so detrimental because I wasn’t doing anything but sitting there and trying to write. When you’re busy, it’s so much better for your head, being able to live and let the creativity hit you. Being able to take time over it is so important. And I enjoy working, it gives me balance.”

Bristol has been an essential part of nurturing this new creative world around her. “It’s such a lovely music scene, and there’s a bit more space to grow,” she says. “Everyone’s doing entirely different things – Scalping are doing heavy rock, techno, massive vibes, and then there’s Grandma’s House who are my really good friends – they do this surfy post-punk thing. Then there’s Fenne Lily doing folk. I dunno, there’s not really anyone doing exactly the same thing, which feels special. You don’t think about Bristol and easily categorise it.”

The venues are consistently brilliant, too. You’ve got Thekla, a former circus boat and Banksy canvas, moored in the Mud Dock of Bristol’s Floating Harbour, The Fleece and Louisiana with iconic tour posters stacked on top of each one another like a proud grandparent’s memory-hoarding living room. Hey, The White Stripes once played to 10 people too. “I remember going in there when I was 15 seeing Summer Camp after school and just looking at the walls. Like, ‘woah, Kings of Leon!’. When I played there I had to really take a moment. Amy Winehouse played here too. It’s just crazy – it’s really nice, growing up in the West Country and being in a city with so much musical history.” 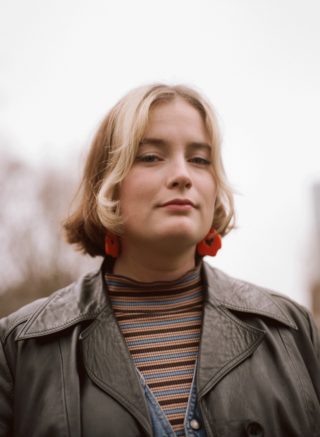 The self-described West Country girl turned 1970s Texas mom gives away the latter part of that personality in the music video for recent single ‘Tonight’, which shows Katy double-green-denim’d and line dancing around Dartmoor. “I’ve been wearing double denim since I was 15,” she laughs. “I started working at this vintage shop and suddenly I found myself being drawn toward Rhinestones all the time. I dunno, when I recorded the first single, I was like, ‘what the fuck, this is quite country’. I had no idea, but yeah, my friends always took the piss out of me. I feel like it’s just a progression – I really relate to it now. Shit, that’s me.”

She talks about the actualities of the video as if it were revision for an unimportant school test that still makes you nervous on the day. “We literally had 10 days to do this music video and I told them I was going to line dance. The guys assumed that I’d got all these lessons booked and I was like, no. I looked at one video on YouTube on the day. We got to Dartmoor and everyone just looked at me like, ‘right, go on then’. And I was just thinking ‘fucuuk’. And I just had to go for it, and everyone was cracking up. I was so nervous. I mean, you could definitely tell it wasn’t my professional… thing. I was very much winging it. If I did really do it, it wouldn’t have been me.

“It’s been really nice being able to be so in control of these videos. I’ve been going to Dartmoor since I was a baby, and my parents met down in Salcombe – that’s where we did the end scene at Bolt Head. We were down in South Sands Beach which is really close to the end scene and bumped into some family friends who had a house just there. Like, ‘Hello Nigel, how’s it going?’. And he was like, ‘Ah, do you want to film on the balcony?’. So that first scene where I turn around was filmed there; it was just all so weird. It kind of settles in sometimes that I’m really being able to make this world around what I’m doing now.”

We talk about her influences a little, and namely where these hedonistic folk icons have disappeared to. Lewis Capaldi’s just not going to cut it, is he? It’s Crosby, Stills and Nash, it’s Roy Orbison and Dolly Parton. But above all, it’s The Beatles. “One thing I found really interesting actually was that documentary with Leonard Cohen and Marianne [Marianne & Leonard: Words of Love]. I was just crying the whole way through because it was so beautiful. And so interesting! Like, I had no idea he was a big old womaniser and micro-dosing on MDMA all the time. You have this really wholesome image of someone, but of course they’re people. Like, of course Joni Mitchell was addicted to coke.

“To have an honest icon is a difficult thing,” she says. “It’s easy to be adored when there’s a mystery to you, and people only know as much of you as is in your songs. You didn’t get to see right into their lives. It’s not like Joni Mitchell was there on Instagram Live Stream being like, ‘hey guys, it’s me here in California, by my roads,’ or whatever.” There’s no alternative to the downbeat romance of ‘Heart of Gold’ if you don’t see the awkward shots of Neil Young eating a ham sandwich. 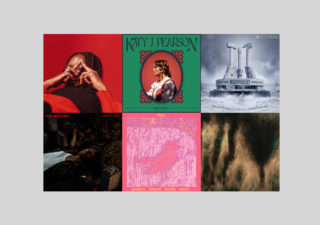