In a tiny, second-floor room in South London, Orlando Weeks has built himself a miniature world. A narrow space at the top of the house he shares with his partner and their son, it has the feel of a particularly creative teenager’s bedroom: posters, books and trinkets line every wall, with pieces of clothing hanging on the door and a small desk providing a studious focal point. This is the place he comes to write, print, stamp, draw and think.

Since the dissolution of his much-loved indie band The Maccabees in 2017, Weeks has barely paused. In 2018, he published his first book, The Gritterman, the story of an elderly council worker reluctantly entering retirement; as well as writing the book, he illustrated it himself and produced an accompanying album and one-off live show. His debut solo album proper, A Quickening, followed in 2020, and its successor, Hop Up, is set for release in January; he’s also composed a new soundtrack for the National Theatre adaptation of Hirokazu Kore-eda’s 1998 film After Life, and is currently working on a new animation project for the Hepworth Museum. All of this begins, develops, and sometimes ends in this room of a few square metres.

“I suppose it’s just nice being busy, having lots to do,” he says, and notes that the amount of work he manages to accomplish comes partly from his own desire to be invested in every part of the creative process. “In my experience, if you start being hands on with stuff, one thing rolls into the next and informs your next decision, making stuff, and if you’re able to do that quickly and move with a good idea, then you can just keep going through it.

“Part of what made The Maccabees good was that it went through those filters – everything had to be a consensus. But now I don’t have those filters, or those other opinions; for better or worse I can move quicker and keep the next process. And I still haven’t got tired of it. With live shows, I really enjoy setting everything up and being way more involved from the moment you arrive at the venue to when you leave the venue. It’s a much happier place for me, because you feel that the whole day is the investment, and not just the hour-and-a-half on stage.” The array of objects in this room is a testament to this enthusiasm for process and exacting attitude to detail. It’s a space that’s been invested in wholly, and Weeks was only too happy to talk us through his creative base. 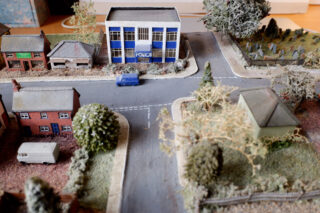 Orlando Weeks: I feel bad because what I’m going to do is make it into a glass-top table, and it’d sit underneath it, but I’ve not got to it yet. It was made by some fans of The Gritterman; I saw it on Instagram and I bought it from them, because I loved it. You can plug it in and it turns on all the lights in the buildings, and when you do that it’s real magic. I still can’t really fathom it – they just really liked the book and built an entire miniature world of it.

They’re called Postcard Models; they now do this for a living but this was one of the first things they made. It’s got every site from the book in there: the graveyard, the police station, the snooker hall. It’s beautiful. 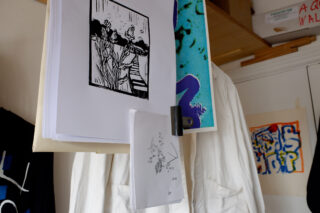 Orlando Weeks: This is the artwork for the new record. And I’m trying to think… I’ve been trying to figure out how to make something that will be like a special giveaway for people. I guess like a prize draw or something like that. For those Hop Up prints, I’ve been printing with lino onto cyanotype, and I think that’s how I’m going to do it. But this one here is straight onto the cyanotype.

If you don’t know how cyanotype works, the sunlight reveals the image. So you’d lay stuff onto the paper and it’d show through; I’ve been slowly trying to finesse all these different things. 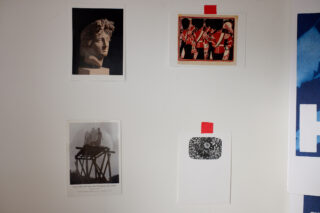 Orlando Weeks: I like the colours of these. I think that’s a Reynolds stone wood carving; that is by someone called Lily – she’s a Swiss etcher and vinyl cutter. I think that’s Apollo’s head. And I like the plinth on the other one. But they change all the time. My mum collects postcards and I’ve picked that up off her. I keep changing them to have something different in front of me. 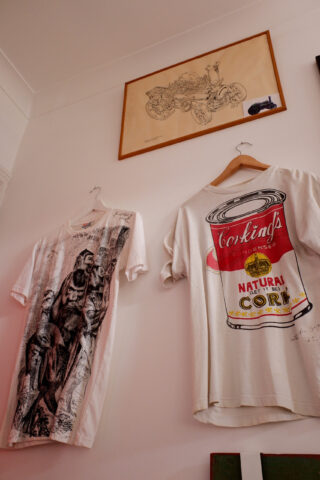 Orlando Weeks: That’s the traction engine my grandad restored. He was the inspiration for The Gritterman, and I like how the drawing was done by someone called Wheeler. Something about that felt fitting.

This t-shirt is by a friend from my art foundation. He was obsessed with cork, and everything he did was about cork. I’ve always loved how that looks, over the top of an old Nike t-shirt. So when we made merch for the A Quickening tour, we did a similar thing. 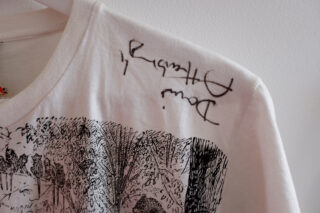 Orlando Weeks: This is my David Attenborough-signed monkey t-shirt. I went to a talk he gave with Melvyn Bragg at the Brighton Centre. They showed Attenborough’s best ten clips or something from his career, with this huge screen and Melvyn Bragg and him just talking. I bought that and his biography; it was so good, and I tried to speak to him, to say more than just ‘hello’, but he had a lot of other people queuing, probably with monkey t-shirts too. But he was very polite. 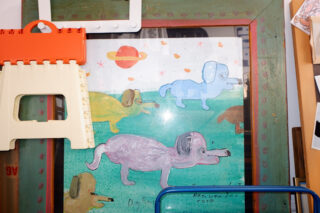 Orlando Weeks: I got this when the Macs were on tour with Florence, in America. I can’t remember where we were, but that was in the dressing room and I couldn’t get over it, and they shipped it back with all their gear. It’s the heaviest thing you’ve ever tried to lift, so it probably added hundreds of quid onto their shipping costs.

I feel like touring in the States, especially with someone as big as Flo, you’re playing venues that are like somewhere out in a car park, not really anything to do with a city – just a dome and a car park. Some of them stick out – like we played the Hollywood Bowl with her, and that stuck out – but it’d be such a guess if I tried to remember where this was from.

I change my mind about whether I want to have it around. But I can’t not have it, you know? Especially after it’s come such a long way. “Even dogs go to heaven in a race.” Something to mull over for you. 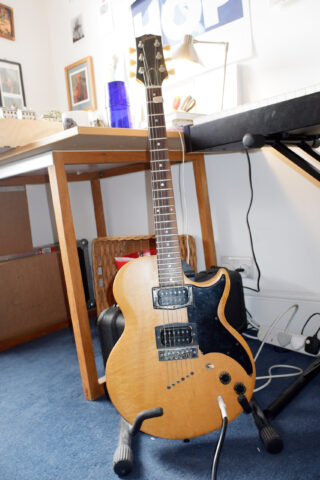 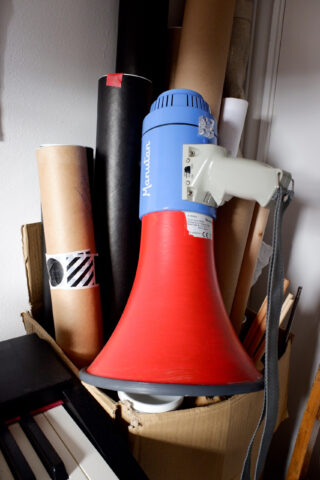 Orlando Weeks: The megaphone is in the video for ‘Deep Down Way Out’. I guess I premiered ‘Deep Down’ and ‘Big Skies, Silly Faces’ with the BBC Concert Orchestra at the Royal Festival Hall, and I used a megaphone there. I thought it might be just a good prop, but it sounded good. Arcade Fire always use them, and the Flaming Lips; I feel like that’s a good heritage that I hope to follow.

I tend to have a functional relationship with instruments. I think Hugo [White, Maccabees guitarist] found me this guitar, and it’s just nice and slim. I’ve had it for a long time. And this keyboard: when we lived in Berlin, my friend who works at Roland told me there’s a Roland shop there and he sorted me out with this. And then we moved to Lisbon and it came with us, and back to the UK. I don’t really want another one, I’d feel sad. I’d rather fix this one. 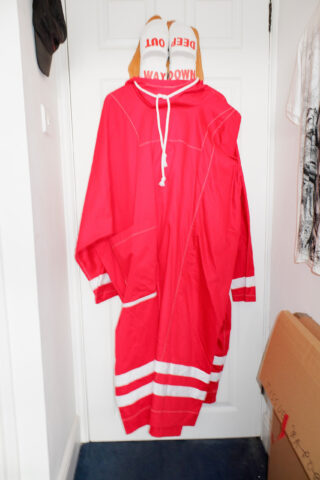 Orlando Weeks: This is another thing from the last video. The double kagoule is made by a guy called Daniel W. Fletcher, and the flip-flops – or sliders, whatever they’re called – are by me. I stayed up way too late making those and we didn’t even use them. I traced the writing on, and painted it all… and it took bloody ages. 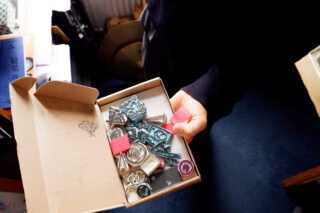 Orlando Weeks: I’m not technical at all. One of the things I like about making stamps or prints or books is that it’s very basic, very analogue. The whole process, from drawing to making things, is very straightforward. Say with stamp-making, it channels your attention and focuses you really nicely, because you’re using tools, and getting a gouge in your thumb with one of those is no fun.

I’m a lot quicker learning to use stuff with my hands than I would be at, like, coding. I still just do really basic music production. I can’t tell whether I really think that it’s the best way for me to work or if I’m too lazy to try and get better at some of those things. Maybe I’ll just leave that sort of floating in the air. But even back when I was at art school, I was doing lots of this kind of thing, with as little technical requirement as possible. 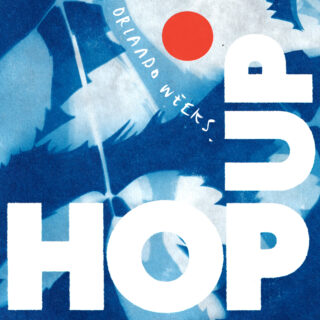 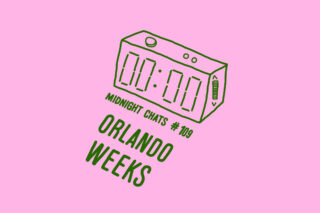 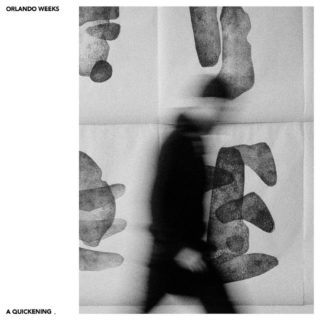