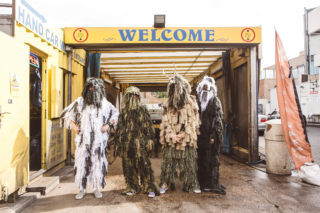 'Putting the mask on helps you transcend just being a musician. You end up with this sense of theatre and I’m always looking for ways you can subvert that.'

“Do you know what the beauty of the woodland analogy is?” asks Snapped Ankles’ Patrick as we sit watching a large Labrador take a dip in the pond behind London’s Hackney City Farm. “It’s that you can apply it to pretty much anything.”

“I guess the only thing that really compares to it is football,” he continues with a semi-serious grin; “maybe we’ll do a football themed band next.”

It’s the hottest day of 2017 so far and we’ve decided to visit one of Hackney’s last patches of unspoilt woodland for our interview. With my phone malfunctioning in the midday heat, I’m starting to wonder if it really was the best idea, but with both Hackney and the forest hardwired into Snapped Ankles’ DNA, we probably couldn’t have found a better spot if we’d tried. Patrick, dressed in a battered t-shirt and cut-off jeans, has just come from work and looks about as far as you can imagine from his demonic stage persona. Dressed in dead plants, face masks and antlers, the band have a look that is half Jethro Tull, half Sasquatch, and is a hell of a lot more terrifying than the mild-mannered man cheerfully chatting about French cinema who’s sat next to me.

Almost everything about Snapped Ankles defies easy categorisation. The music they make is primal, tribal-like electronica that teeters between the cold, driving motorik rhythms of Can and Neu and the shamanistic, occult-feeling prog-folk of bands like Steeleye Span and Black Widow. “When we started the band going it was mostly groove-based stuff with guitars and drums and keyboard,” says Patrick in typically understated fashion while talking about the band’s origins. “I suppose when you get a live drummer and a groove going things suddenly become post-punk by their very nature.” 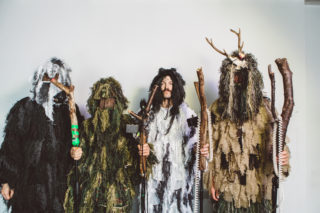 For Snapped Ankles, the journey into conceptual synth music, like for so many others, began with a love of Kraftwerk. “I loved how they got rid of the drummer and suddenly thought they were robots,” explains Patrick. “They basically decided to embrace new technology and go ‘this is the future and we’re the robots.’ But for us electronic music isn’t the future – electronic music is now vintage.”

The four-piece have taken this idea of regression and run with it. Many bands could be said to encompass the sounds of the forest, by Snapped Ankles almost literally play the plants. Patrick says that they’ve always been into bands like Gum Takes Tooth and Lightning Bolt; “bands using drums and applying the post-punk groove directly. So rather than just buying a synth we thought, why can’t we handmake one or even better, just go out and find a natural one? I found these basic disco triggers and attached them to old bits of timber I’d found in the woods. So we took what looked like a rotten log, added a trigger, and you’ve got your smashed-up synth or guitar, or whatever.”

Snapped Ankles experimental instruments have led, in turn, to a highly experimental approach to making music. Getting together for what they call ‘log jams’, most of the band’s songs evolve from freeform drum sessions that see the four members bashing out rhythms on wood, synths and sequencers. “They tend to be an incubator for working Patrick explains after I ask him about playing out the songs,” he says. “It’s a bit like that Public Enemy story – when they wrote ‘Fear of a Black Planet’ they all stood in a room hitting samplers and making absolute chaos. They’d record everything, listen back and go, ‘yeah, that’s where it’s working.’ We try and emulate that approach, really. It’s about setting up a bunch of bases that we can eventually develop into new sounds.”

These jam sessions also form the foundations of Snapped Ankles’ remarkable live performances. “We’d put on these warehouse shows with performance artists and dancers – all people with good shows, and we apply that thinking to our music.

“I managed to convince the rest of the band to wear ghillie suits. They hadn’t really done art performance before, so it was good for those rock boys to be able to take on a different persona. I mean, none of them have a background in performance art; you have to spend a few years rolling around naked in a bin-bag or covered in butter to free yourself up enough to really do performance art.”

Although it’s a philosophy that is becoming more difficult to pull off now that they’ve become a touring band, the group are determined that no two gigs should ever be the same. “We’re trying to deliver the full experience,” says Patrick, “like, take things somewhere beyond just the music. Putting the mask on helps you transcend just being a musician. You end up with this sense of theatre and I’m always looking for ways you can subvert that. Like maybe the band can walk around the audience, or the crowd can wear the masks. 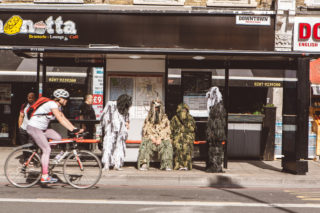 “I used to love it when Lightning Bolt would set up in the middle of the crowd,” he continues. “It’s inspiring when you see live bands that try to push it. The stage that bands play on is so regimented. Like, people go to college and get a degree on how to set up bands in a certain way. Those are all things that I think are up for grabs.”

As we talk, it quickly becomes apparent that Patrick is a man whose head is brimming with ideas. Our conversation tumbles at breakneck speed through obscure techno bands, the ecology of ancient woodland and lost horror movies. Almost any thread you pull on releases an explosion of new concepts and tangential thinking, so it’s probably not surprising that Snapped Ankles have made this seemingly large conceptual leap between cold, technological electronica and ancient, occult imagery. “A lot of pagan history has been forgotten, but it’s left this kind of primeval fear of the forest that we’ve tried to tap into,” he explains with a shrug. “It manifests in things like Morris dancing and the Krampus [the half-goat, half-demon folklore figure] and all these old traditions where people dress like the devil and scare kids. I think there’s an aspect of that in the performance of certain genres of music; a fierceness and energy that we’ve decided to have a little fun with.”

As well as ancient woodland and pagan deities, a deep love of cinema also plays a large part in Snapped Ankles’ sound and mystique. ‘Drum Cinema’, one of the band’s performance art pieces splices together scenes from Blue Velvet, Peeping Tom and the film from which the band take their name, Misery, while filmmaker Sol Haim is an unofficial member of the band. Signing with Leeds’ Leaf Label in March of this year (“It just had to be that label!” says Clarke when I ask about this, “it’s just so perfect!”) the band’s just-released EP ‘The Best Light is the Last Light’ is chock-full of nods to classic and arthouse film.

Recent single ‘Jonny Guitar Calling Gosta Berlin’ is a case in point. A reference to Greta Garbo’s film debut The Saga of Gosta Berling, its main inspiration comes from Jean Luc-Goddard’s situationist nightmare Weekend; a film that charts the collapse of civilisation through the prism of one couple’s weekend break. Once described as a film that “reads itself, tells the viewer what that reading should be and at the same time tells the viewer that this reading is inaccurate and should be ignored” it’s the ideal foil for Snapped Ankles’ music. 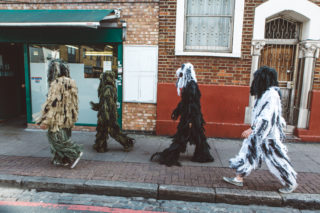 “I just love the weird, circular nature of it,” beams Patrick. “I like how it starts with this bourgeois couple planning murders in the city and ends with them being murdered by hippies in the forest.”

Wilting under the afternoon sun, we decide to leave the woods and head down to Broadway Market to find some water. Walking past rows of shops and cafes, we find ourselves playing that typical London game of pointing out the new businesses that have appeared since the last time we’d been down this way. “We haven’t publicised it much, but we’ve done some performances with estate agents signs,” says Patrick as we walk past The Albion, a once-famous football pub that’s currently being redeveloped into a fish restaurant. “We were playing this squat and decided to hook our synths up to estate agent signs and dress like estate agents with the ghillie heads. We were basically auctioning off parts of the building in song and almost in time. The look of horror on people’s faces; I think it might be the new direction for the band.

As we amble across the bridge spanning Regent’s Canal, I ask if that’s Snapped Ankles’ future, once they’ve released their debut album, ‘Come Play The Trees’ at the end of September. “Rejecting nature and embracing pure capitalism?” asks Patrick. “Yeah, why not? After the forest men; the estate agents.” 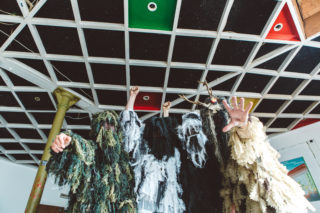