Meeting the Deptford jazz collective for whom the possibilities are endless

Down an unassuming alleyway next to a railway bridge in Deptford, one of London’s most exciting nights is about to take place as ‘normal’ for the first time in sixteen months. It’s the first Wednesday evening since the UK – for better or worse – eased almost all Covid-related restrictions, and a cautious buzz fills the air outside Matchstick Piehouse as the assembled musicians and attendees prepare for the return of Steam Down.

Half an hour later and the night’s founder, saxophonist and singer Wayne ‘Ahnansé’ Francis, is presiding over a joyous scene: people – both masked and unmasked – dancing just feet away from a live band, with no limits on singing, hollering or showing enthusiasm of any kind. Most of the room are regulars and there’s no stage, with only a set of monitors and mics dividing the crowd and the band. The assembled musicians for the night open with a reggae-flavoured jam, meandering through heavy grooves and improvised vocals until Francis sneaks in the melody to Chaka Demus and Pliers’ all-time classic ‘Murder She Wrote’. The crowd loses it, and as is only appropriate, the band pulls up, comes in again, and for a moment the last year and a half fades away into the jubilant noise.

Speaking via Zoom a few weeks before the return of Steam Down proper, Francis explains how vital the collective atmosphere of the night has been since its start. “It’s always been central to me to bring musicians together and to try to have regular connections with a musical community in London,” he says. Founded in 2017, Steam Down’s ethos was born from Francis’ time in London’s DIY jazz circuit and adjacent scenes. He cut his teeth at such pivotal institutions as Passing Clouds, Total Refreshment Centre and STEEZ, the south London open-mic night where you could find anyone from King Krule to Moses Boyd back in its day. As if those chops weren’t enough, Francis was also one-quarter of United Vibrations – alongside drummer Yussef Dayes and his brothers – the group widely credited as the pioneers of London’s current jazz-meets-Afrobeat-meets-rap wave.

In regular times, you’d find musicians, singers and MCs of all stripes and scenes performing at Steam Down. “Jazz is a central part of what we do, but there are another two thirds,” Francis stresses. “One-third of that I would say is hip-hop, rap and grime… and the other is soulful R&B,” he says, before adding that “West African and Caribbean kind of vibes” are also an essential part of Steam Down’s DNA. While most guests are drawn from the seemingly endless pool of young talent in London – think Nubya Garcia, Ezra Collective‘s Femi Koleoso and KOKOROKO’s Sheila Maurice-Grey – there have also been a few special appearances from further afield, such as the time contemporary saxophone colossus Kamasi Washington dropped by between dates in London.

During the pandemic, Steam Down has, unsurprisingly, not been running at 100%. For months the weekly night was put on hold entirely as lockdowns rolled on and tour dates across the world got pushed back further and further. Then earlier this year, as things started to ease, Francis and co. started up again with a new socially distanced Steam Down. Whereas the pre-pandemic night was known for its often rapturous, energetic crowds, the socially distanced SD weekly was altogether a more “introspective and meditative” affair, says Francis. “I started one of the sets with a kind of musical meditation, and that completely transformed how the space felt,” Francis explains of recalibrating the night, though he admits the socially distanced nights were “maybe more of a calm down rather than a Steam Down.” 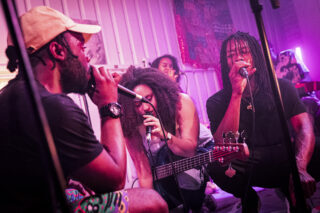 But things haven’t been entirely calm for Francis and his group of friends and players. While Steam Down started life as the weekly jam night, in recent years, core members have begun to tour and record under the name, playing festivals across the UK and beyond and inking a record deal with Decca. With all live commitments cancelled for a year, Francis spent most of the pandemic obsessing over how to capture the energy of Steam Down on record. In some ways, he tells me, it’s been “nice to be able to not tour, not do a weekly night and just focus on writing music.” However, he admits he’s deeply missed the connection and collective energy of the weekly nights that Steam Down was founded on. “When you play together with a group of creatives every week, you start feeling another person’s energy and their voice and their vibe, essentially,” he says. “Not just their kind of playing, but their voice. And I think some of those voices became a bit more distant through this period of time because we weren’t together regularly with each other.

“With recorded music, it’s almost impossible for me to capture the feeling of an SD weekly,” he continues. Instead, Francis “started with thinking, ‘what is the energy that I was feeling, then?’ And then how can I recreate the energy rather than trying to recreate what we played? I kind of reverse engineer it.” The result of that process is the group’s upcoming debut EP, Five Fruit, due out in late September. Featuring a mix of tracks that will be familiar to regular SD weekly goers and new material, the five-track collection is heavy on uplifting horns, statements of affirmation and a spirituality that nods to greats like Alice and John Coltrane and Sun Ra.

“Each song is a fruit for the spirit,” Francis explains. “The idea was that each of the songs was going to have a different emotional quality and a different message to it.” Title track ‘Five Fruit’ is a soaring statement of intent that opens with a spoken word manifesto from Francis before building to a triumphant conclusion layered with horns and keys. Meanwhile, ‘Unite’, with its swooning vocal from Lady Shaynah, is all “about being gentle, and allowing yourself to heal from your depression.” To round things off, closing track ‘Can’t Hold Me Back’ showcases Steam Down’s versatility, enlisting MCs Shumba Maasai and Tinyman to lay down a series of defiant verses over a pulsating grime-inflected instrumental that glistens with flourishes of jazz. 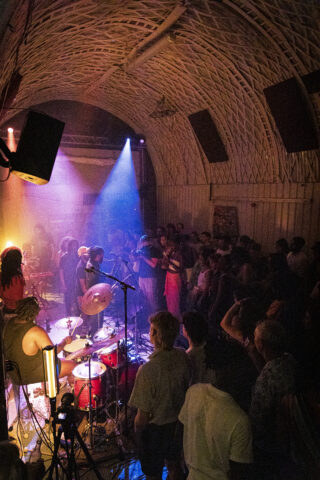 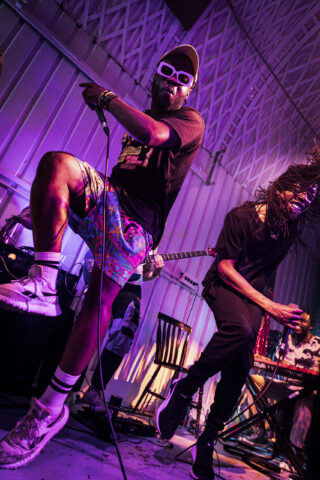 In total, Five Fruit is a snapshot of the Steam Down universe. Featuring more musicians than Francis can name off the top of his head, it’s as close to the weekly nights as is possible on a recorded project. “I’ve always kind of seen Steam Down more as an organisation than a band as such,” he muses. While the weekly sessions, touring line-up and recording ensemble might not necessarily feature the same combination of musicians, and on occasion might not even feature Francis himself, each part is still equally Steam Down. “It’s always been about expanding beyond the people who are even in it right now,” Francis says. I’m really inspired by bands like the Buena Vista Social Club that have rotating musicians. They do that a lot in a lot of the bands in West Africa as well.

“On the one hand, [Steam Down] is my baby,” he admits as our conversation turns to the future. With the release of Five Fruit on the horizon and touring becoming possible again, chances are that Francis might have to spend a few Wednesday evenings outside of Deptford in the coming months. “But you know, your babies grow up, and they leave the house, and they have to have their own life.”

Reflecting on what the next chapter of Steam Down may be, Francis seems genuinely content to let other group members take control of the weekly nights if need be. “There have been times when I’ve been away, or the core band has been on tour, and it still carried on with other people that are part of the community,” he says. “So it happens with or without me and with or without any of the musicians that are in it.” True to its community and improvisational roots, even if the nature of the project changes and expands, the energy of Steam Down will remain the same.