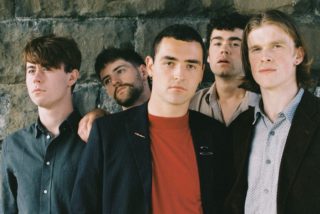 How you feel in your head as a young Irish male

“I think that’s lazy journalism,” says a stone-faced James McGovern. He’s got a point. I’ve just broadly compared The Murder Capital, a McGovern fronted five-piece from Dublin, to Idles and he’s having none of it. “To be honest, and I suppose we have to keep the honesty thing going, I think it’s lazy journalism when people throw us into that group of punk bands when there is a credible Irish scene.” Having spent the last half an hour discussing sincerity and directness with James, it’s a fair cop.

James arrives with guitarist Damien Tuite off the back of a busy Irish tour that’s taken in Galway, Limerick and Cork. Now they’re back in Dublin, the city where they first met through music college and are now based. “Here we are, I suppose,” smiles James, “there is not too much romance involved.” Damien slouches back into his armchair, comfortable in James’ shadow. “We’re lacking romance that’s for sure,” he says. “We will come back to you with fake folklore next time.”

There might be no folklore but there is a story that emanates through The Murder Capital’s biting voice. It’s caustic punk with widescreen ambition; music that sounds and feels like where it came from. “The Murder Capital is a reflection on something that happened,” explains James. “I had a very close friend of mine take his own life in February and we wanted to reflect the neglect held towards mental healthcare in Ireland. Unnecessary deaths happen due to neglect from the State, or from general emotional intelligence from our society. My friend simply couldn’t afford the help he needed.”

The band exist to reference the city they live in and candidly depict modern life as a young Irish male. “I think the way we experience socialising in Dublin can have its dark side,” says James. “Everyone our age likes to party and I think if you’re living that life well it’s fun, but the other side to it is that with the grip of technology on our generation everyone is trying to fabricate community at the weekend. They’re using drugs to do that and that can have a darker side to it.”

They formed barely a year ago and are a group stripped to their core with muscular principles that match a muscular sound. These five men want to change society – something they stand by and regularly voice. “We are not joking around,” James assures me. “We want to allow our generation to express themselves again and to regain the community that’s being lost.” Damien instantly backs him up. “That’s right,” he says, “we want to be taken very seriously in what we do. It does feel like the highest level of what music is capable of – to affect culture and make a change.”

“Of course, it can be on any scale,” says James, “whether you are expressing an opinion on how you feel about mental health or simply how you feel in your head as a young Irish male. Even to de-stigmatise alcoholism and excessive weekend bingeing, if you are open about it in your friendship group and that creates change then you have done something there.” 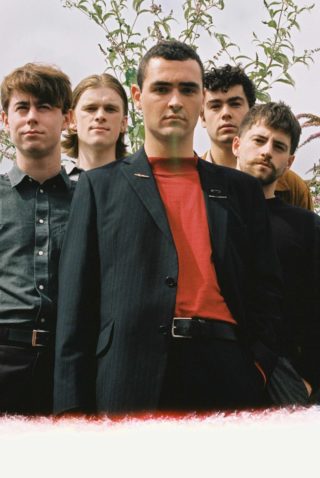 For the time being The Murder Capital are minimal on output and maximum in message. For a well-hyped band it’s difficult to find any recorded music online, save for a few local gigs on YouTube and a polished live video for an early track called ‘More is Less’. A fascinatingly sparse piece of work that’s fearless in its repetition, James’ horse vocal provides a barked mantra of “more and more and more” (which is similar to IDLES) while the band share an aggressive dancability with the four-to-the-floor bands that immediately followed The Strokes. For now it’s the band’s calling card, but new releases are promised next year. “At the start we were thinking what can we do with the least amount of notes, the least amount of information,” says James. “It feels like it’s constantly playing against itself. The lyric is a play on words but I believe the sentiment to be true.

“Honesty is a thread through everything we are doing,” he says. “We always question ourselves in the writing process to make sure we believe in our words and the atmosphere we are creating.”

“I don’t think we could get up on stage and play it if it wasn’t true to us,” says Damien.

It’s a pretty idealistic vision, and James openly admits to being a romantic at heart. “I won’t go on about what we read and all that stuff,” he says. “We all take something from it and we all share with each other. A lot of songs have come from writing poetry separate to the band. I find the lyrics that last the most for me, or are the most impactful, are when I am not concentrating too hard; I try to write every day to keep my head in that space.”

The environment they live in is just as big an influence. “I am massively affected by architecture,” James continues. “Buildings will affect my mood and my temperament. Brutalism is my favourite – we don’t have too much of it here in Dublin; cities like Glasgow, I love, but I still think the classic kind of Georgian architecture all over Dublin is beautiful too. I like brutalism because it’s not trying to be beautiful. It’s the cheapest, harshest creative expression.”

This time Damien doesn’t agree with James: “I have to say, I am a sucker for an ornate building.”

As Damien and James spar over decorative Victorian terraced housing it’s clear these two spend a lot of time together. “Totally, I am inspired by it,” enthuses James. “The conversations we have with each other, it’s like family, to experience them grow and watching yourself through them. I think halfway through our UK tour we all realised that the fact that we can do this is so special. I looked around on stage and it was so beautiful and I think I went up to Damien and said this is like a fucking playground, we are actually back in junior infants at 4 years old playing with Playdoh, you know. I am with my best friends – it was a super humbling experience.”

For a band considered confrontational in delivery and stage presence (because they are), the playground analogy points to a light and shade that will soon be evident. “We have always tried to be as ambitious as we can be,” James tells me. “When we are writing songs like ‘More is Less’, or other tracks in our set of a similar confrontational vein, then I think it deserves a demonstration of anger – I am angry at a lot of things. There are other moments in our set, though, where it’s not confrontational at all. It would be too easy for us to write an album of ten punk songs at 170 bpm; we could deliver that. It’s a reflection of what’s inside our heads and there is no way we can be angry for that amount of time. I cry as well, I feel romance. We try and reflect life and life is never that monotone. My vocals and what we play feels honest.”